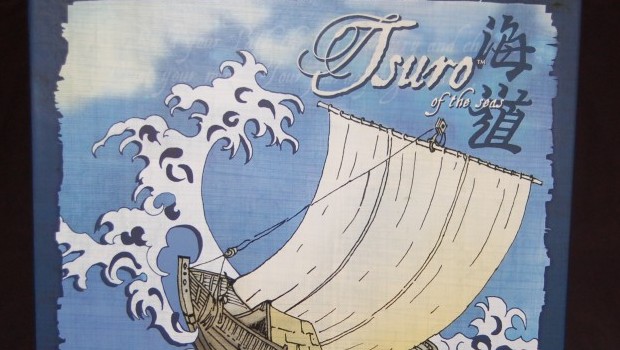 While producing a game may be difficult, coming out with a sequel can be an even bigger challenge.  How different must a game be to make it worthy of a sequel without making the game so different it doesn’t have the same spirit of the game.  Tsuro is a simple game that made its way into many family collections. Could a sequel retain the simplicity but offer up something different without alienating fans of the original?  That is what Tsuro of the Seas looks to accomplish.

The contents of Tsuro of the Sea should feel familiar, but there are some differences:

The board of the original Tsuro featured a dragon with earthtones like red and brown.  Tsuro of the Seas displays a giant sea monster on the board with hues of blue and purple.  It’s fitting of the theme of the game.  Instead of 36 squares, Tsuro of the Seas contains 49 squares in a 7 x 7 grid.  While this gives the impression there is more room on the board, the addition of the daikaiju should change that instantly.

Before any of the players place their ships on a starting point, the daikaiju are placed.  The number of daikaiju decreases as the number of players increases.  Each one is placed by rolling a blue and a yellow die, which correspond to the middle five squares on the board.  After the square the daikaiju is being placed into has been determined, the tile should be rotated to a random position and then turned face up.  Once these are placed all players put their ship on a starting marker on the perimeter of the board.

Each player has several steps in their turn.  First they roll the dice to see if the daikaiju are moved.  On the player’s turn the two dice are rolled, and if the total is 6, 7, or 8, the daikaiju will move.  A single die is rolled and the daikaiju are moved according to the result of the die and the arrows indicated on the daikaiju tiles.  If the daikaiju moves onto a space with another tile, whether a wake tile or daikaiju, the tile is removed.  Any ships on the space the daikaiju lands on are removed from the game as well.

Once the daikaiju have been resolved, the player places a wake tile next to their ship.   All players start with three tiles in their hand that show four different wake trails which the boats can travel.  Some wake trails are straight, while other curve around.  The ship moves along the wake trail in front of it.  If the tile is placed in a way that it connects to other wake trails that would cause it to move, those ships are moved as well.  This means that your ship can move on another player’s turn, so you have to stay on your toes.  Finally the player takes a new wake tile.

I do enjoy Tsuro of the Seas more than the original Tsuro for several reasons.  When playing with a large number of people, it was possible that the draw piles were exhausted and forced some players to play tiles that they didn’t want to.  Now it is possible to have three tiles in your hand for a much longer period of time.

For those who enjoy randomness, then the daikaiju add that in spades.  They may not move every turn, but there is a possibility that they will.  If any of them are close to your ship, you might get a little nervous that it could be taken by the daikaiju.  You may also need to decide if you want to move your ship closer to the center of the board where the daikaiju are, or if you move closer to the edge of the board to avoid them.  If you want to play the game without the daikaiju, you can do that as well.

Tsuro handles games from two to eight players.  From my experience, the game plays best somewhere in the middle of that.  With two players, the game doesn’t have enough tension, while the eight player game takes a lot longer.  Also, if someone is eliminated early, they may have to watch a while until the game is over.

Games of Tsuro of the Seas don’t take long to play.  It is a light game with a few decisions to make.  Unless you have someone with severe analysis paralysis, games probably won’t take more than a half-hour, especially if others lay down their tiles relatively quickly.  Your position can change rather quickly, and while some of it is strategy with how you lay your tiles down, some of it is luck of the tiles that you draw.

If you are looking for games to introduce your friends to while hanging out, or just something to play as filler, then Tsuro of the Seas is a nice option. It's hard to find non-party games that can handle eight players and it is easy to teach. The daikaiju add enough to give Tsuro of the Seas more tension without changing it too much from the original. If you are a fan of the original, then you’ll surely enjoy this one.