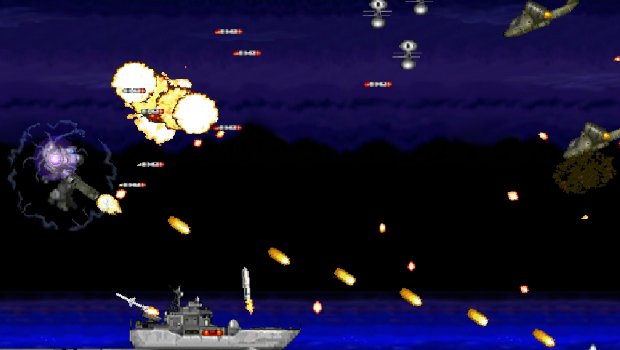 The early days of gaming are littered with unexplained, hyper-violent death romps through a space factory, with the player assuming the role of a highly skilled death machine operator.  Be it a plane, tank, robot suit, or the like, the goal was always the same: murder everything.  That familiar experience is captured perfectly in Armed Seven, a new arcade-style PC game from Astro Port.  Armed Seven has all of the nuances of an old-school 2D shooter, and delivers them with a stone-faced sincerity unseen in many of today’s attempts at gaming nostalgia.

In Armed Seven, you control a Mecha in defense of the Earth, fighting in the skies against hordes of alien ships and Mechs.  There are only five levels, the last of which is just a boss battle.  However, there are four difficulty levels which make enemies faster, stronger, and changes the patterns and velocity of their shots.  Each level contains a semi-boss towards the halfway point and a boss battle at the end, each of which is unique and fun to fight.  The game allows you to create a weapon loadout from three options.  The primary and secondary weapons can be fired constantly, and are your basic machine gun and rocket launcher fare.  The third is a high-powered special weapon that needs to recharge during battle, be it an instant-kill melee weapon or a screen-covering beam cannon.  Your choices for primary and secondary weapon affect the charge time for your special weapon choice.  Each loadout will give you different firing patterns, from a burst fire approach to a straight-line attack backed up with rockets or a second gun.  Some choices make the game easier, while some give the player more of a challenge.

The game is 16-bit throwback in terms of graphics, so what you see is what you get in that regard.  The backgrounds deliver action pertinent to the battle and the cityscapes look amazing.   The Mecha the player controls looks great, but the enemy models lack any special qualities.  Many of the “alien ships” are just planes and helicopters.  Just a little creativity on that front would have made the design top-notch.  The animations in the background are stellar, and the final boss is accompanied by a sequence that is shocking and fantastic.  The music is just one song, and while the song isn’t a bad one, it gets old after a few play-throughs.  Unfortunately, the game lacks a volume control in any form, so muting the game and listening to some smooth jams is out of the question.

The in-game experience is a fun and challenging one, but it lacks in several areas that holds the game back from being a must play.  The enemy paths and entrance points are monotonous throughout.  Many of the grunt enemies’ weapons are dull and repeated level to level.  While these problems tend to dull the competition, the action is still at a high level, and the boss battles more than make up for the lack of a challenge.  There are helper ships that you blow up (like a jerk) to advance your shields and your shooting power, and the higher your shield level (with a cap of two), the more bonus points you get at the end of a level.  You continue to advance until you lose your three lives, though you can earn additional lives through the collection of points.

If you go on a particularly amazing run, or make a dodge that the world needs to see, all runs through Armed Seven can be saved and replayed in-game.  In addition, there are 16 “emblems” that can be earned, that work as achievements.  If you only feel like playing one level at a time, all levels are playable singularly from the main menu.

That’s basically it. Straight-line Mecha bullet rain across Earth and into space, crammed into five short levels littered with laser-spewing enemy aliens and large, mean-looking boss ships. If that doesn’t make the eight year-old gamer in you go “totally boss”, “rad, bro”, “that’s the bomb, cheeseman”, or whatever the hip saying was when you were eight, then I don’t know what will. Many of you will have played a game just like this in the past. You may not even know what it was called, but you remember it was fun. That’s what Armed Seven is, and that’s all it is trying to be. In a world littered with indie games trying hard to be nostalgic and missing the mark, it is nice to play a game that truly captures that 16-bit experience.