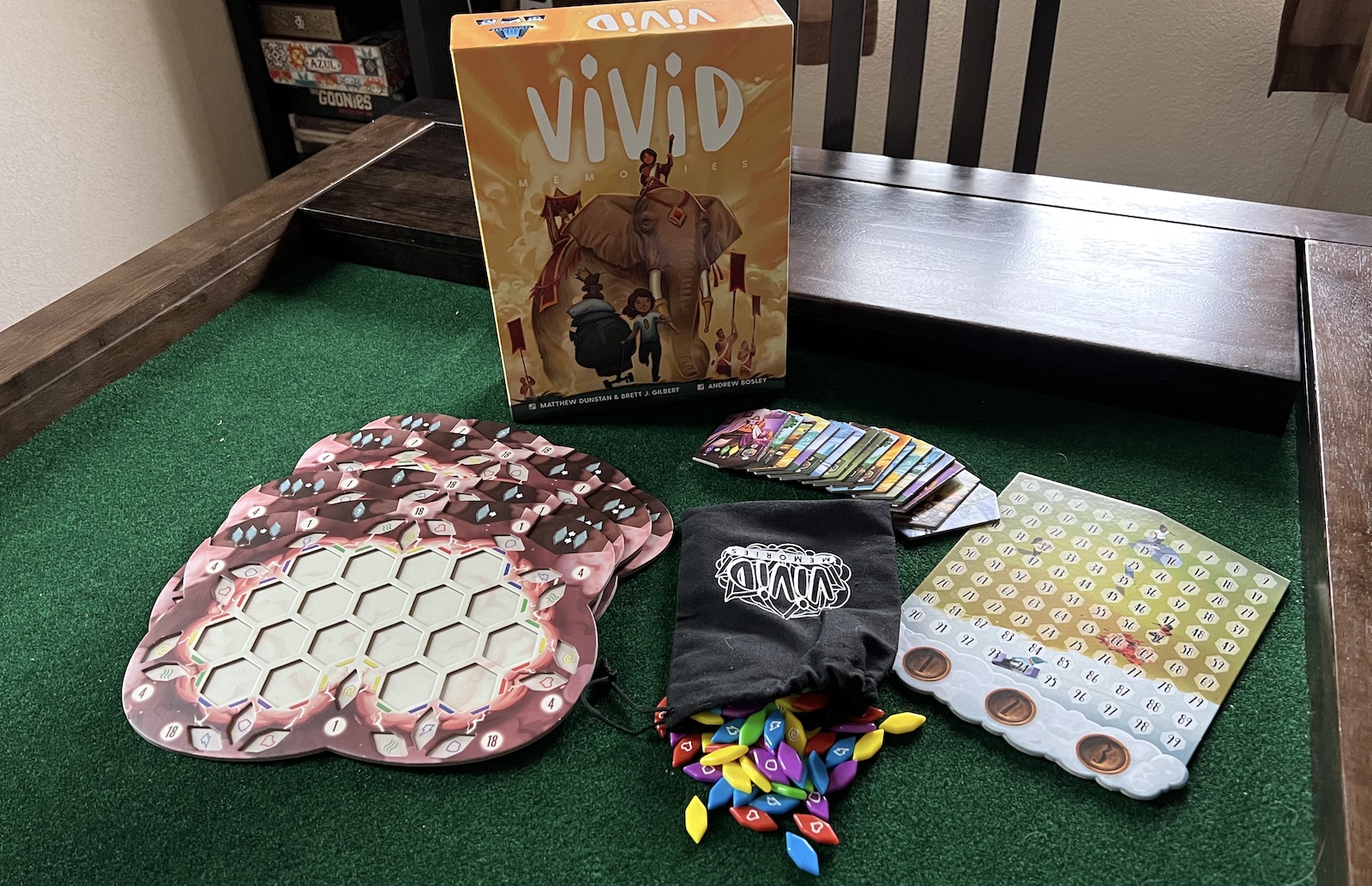 Recently, I’ve taken to playing more lightweight, abstract strategy games with my family- Azul and Sagrada have become immediate hits in our house, and have led us to playing ever more complex games together. When I brought Floodgate’s Vivid Memories to the table for the first time, based on the art and components, as well the demo at the Floodgate booth last year at Gen Con; I assumed we were about to play a game that was of a type with those others – another lightweight abstract strategy game – but with beautiful art and an intriguing theme. Curiously, Vivid Memories turned out to be much heavier than expected, with deep levels of abstraction, and a theme that sometimes couldn’t get out of its own way. 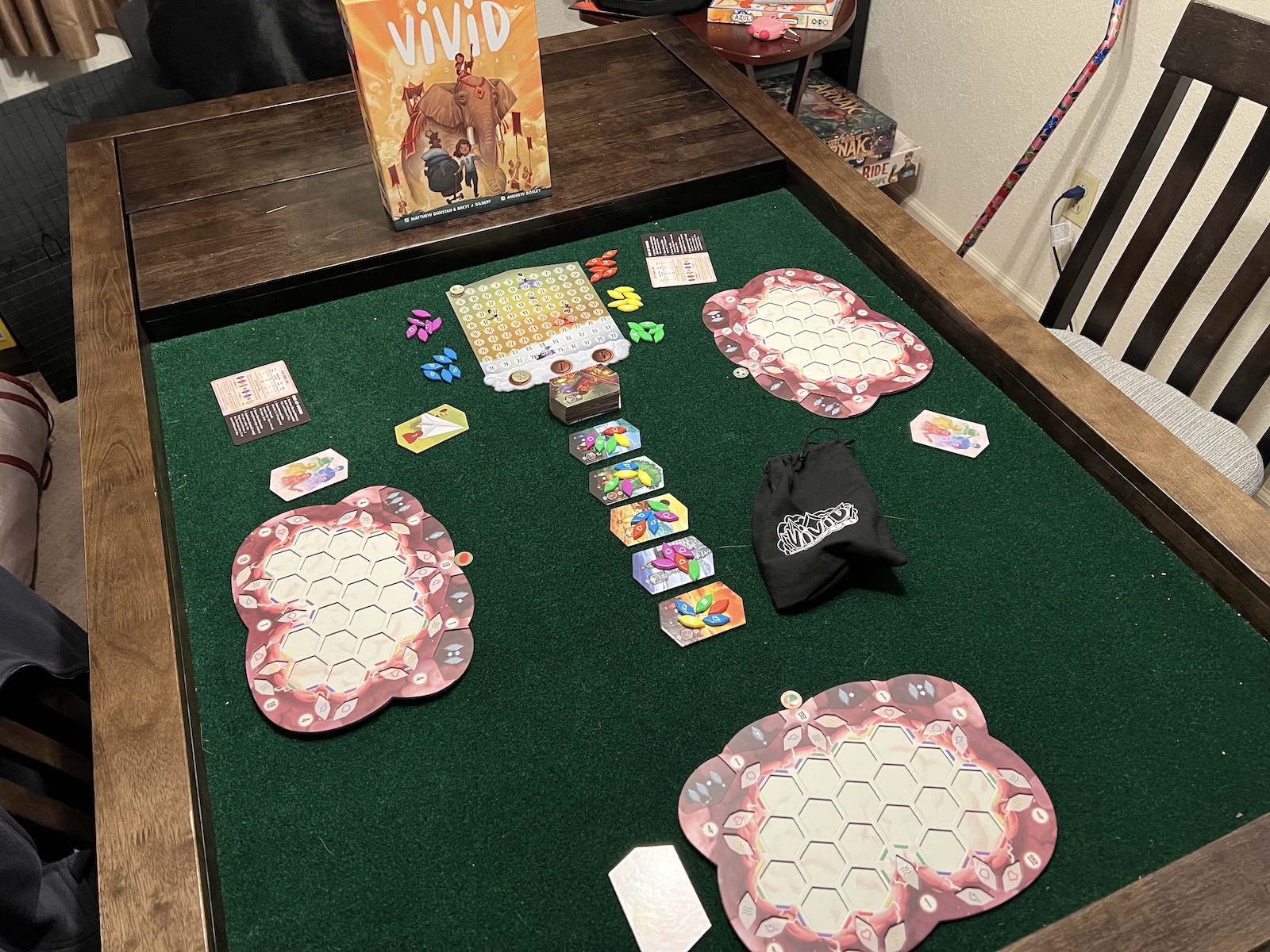 The game sets up easily enough, and there’s a comforting familiarity for players of other tile drafting games: a bag full of colorful bits that bear more than a passing resemblance to candy, getting assigned a random color that scores additional points once the game has ended, groups of randomly drawn tiles from the bag of bits in the center of the table, and a personal cardboard tableau to place those tiles on and score. Less familiar and certainly more unique is the theme: each player is collecting multi-colored memory fragments (tiles) from the ‘moment’ tiles in the center of the table and placing them on their “brain” board (tableau) to form ‘mental threads’. Those ‘mental threads’ then connect to ‘core memories’ and unlock important ‘moments’, which in turn help score even more points when each player reveals their ‘aspiration’ tile. (The ‘aspiration’ tile shows random color that scores additional points at end of game) 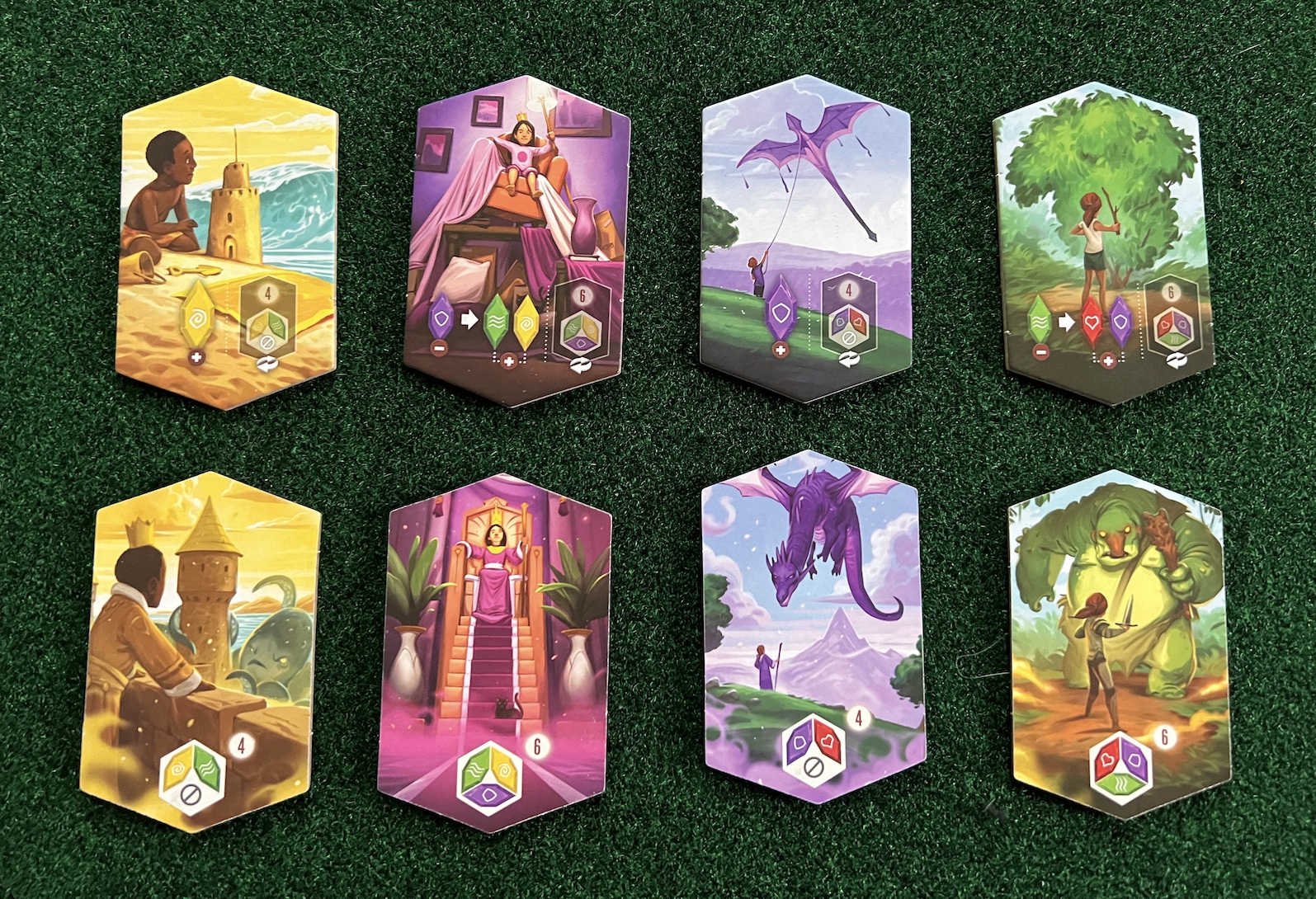 At first, I found the theme intriguing: it’s a conceptual sibling to Pixar’s ‘Inside Out’ without the coming of age angst and anthropomorphic personifications of emotions. The gorgeous artwork of Andrew Bosley is perfectly suited to this theme, with beautifully rendered tiles depicting childhood memories that flourish into fantastical moments when flipped over. However for as much as the theme contributes, the lavish devotion to the theme also unnecessarily detracts. For instance, each round of gameplay is split into four phases: ‘prepare’, ‘remember’, ‘reflect’, and ‘reward’. ‘Prepare’ and ‘reward’ are both self-evident, but ‘remember’ and ‘reflect’ are vague terms that barely speak to what players do during those phases (which can more accurately be described as ‘drafting’ and ‘actions’). Strict adherence to this thematic language added a nagging layer of cognitive dissonance when trying to navigate the rulebook and made this a surprisingly hard game to figure out. 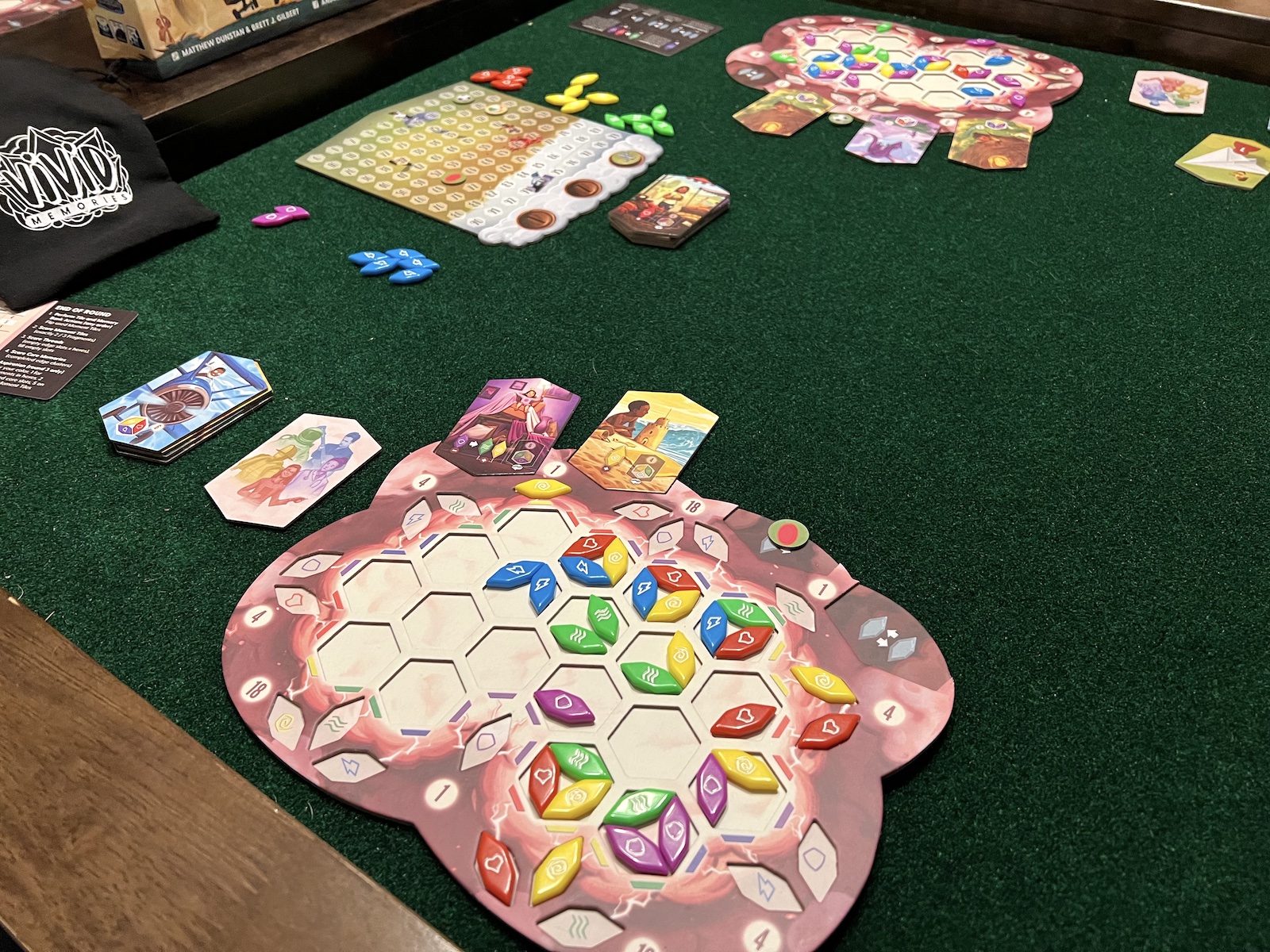 The core mechanics of the fragments (tiles) – how they are drafted, placed, and manipulated is all good. However, the indented hexes you place tiles into (up to three per hex) more often than not end up a sloppy pile, and the tiles themselves are slight and fiddly. Also, it turns out that mentally navigating the permutations of a hexagonal puzzle board as opposed to, say, a grid puzzle board happens to be exponentially harder to abstract. Nearly every decision made – from drafting enough fragments to pull the moment tile, where you place the fragments, to what color and how many fragments are in a single hex, to which default action you supersede with a moment tile action – is consequential, and there are only three rounds in the game, which doesn’t feel like nearly enough. If you suffer from analysis paralysis, this probably isn’t your game. 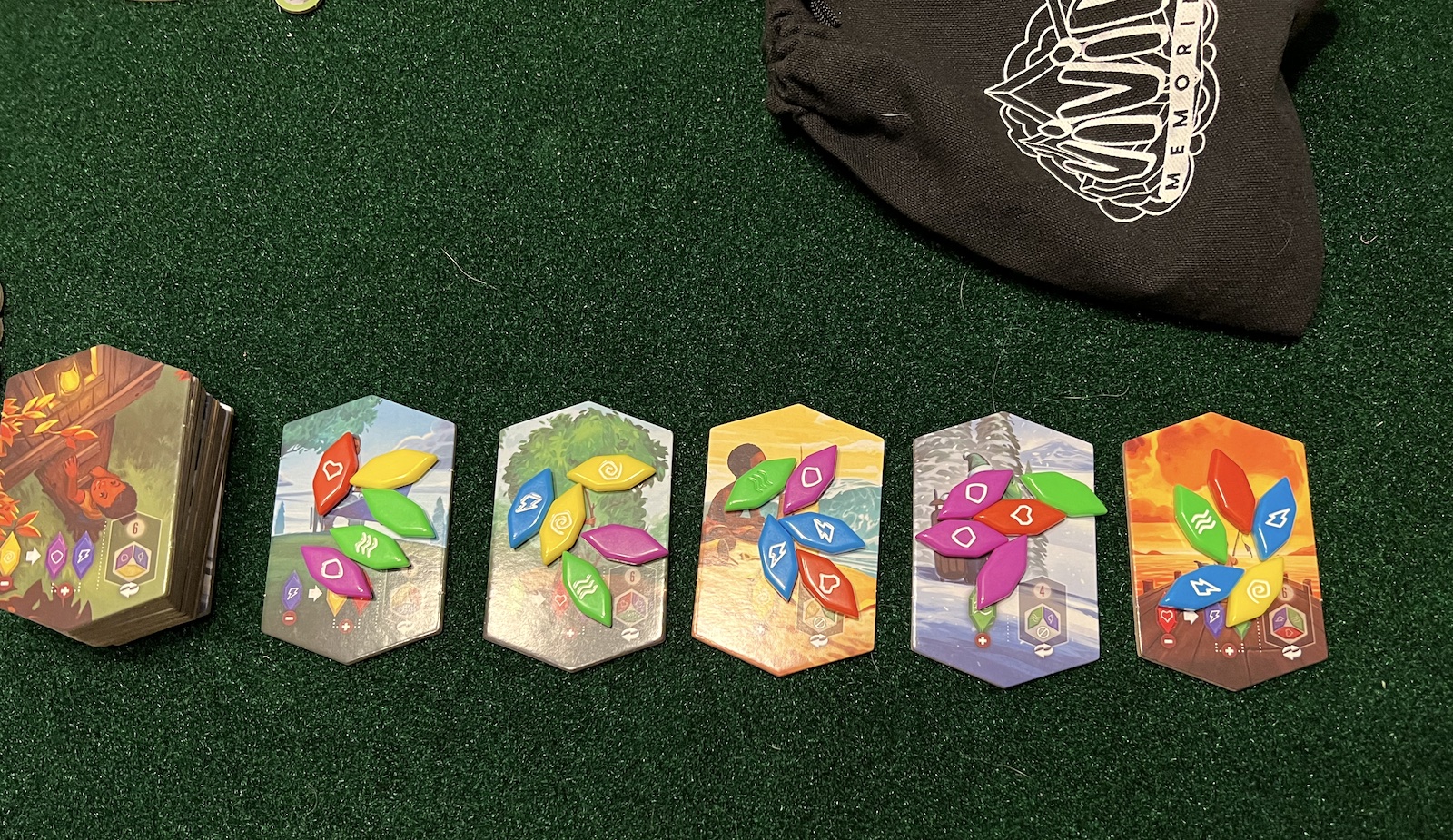 There are a few unforced errors that drag the game down a bit: I applaud the symbols etched into each color of tile, but the color matching of blue and purple on the moment tiles caused all sorts of confusion and tile misplacement. Picking up a memory tile can be one of the most important moves a player can make, but the action and score diagram are covered up by tiles waiting to be drafted. The moment tile art is inspired, and is one of my favorite parts of the game. However, not only do duplicate tiles fly in the face of the theme (as there are two of each design), but, if both are in play or claimed by a single player, scoring can swing in a wildly unbalanced direction. Also, why do the player aid cards have set-up information which isn’t needed at all during the game, but not a list of the actual phases of a round? Why are there so many different player tokens? 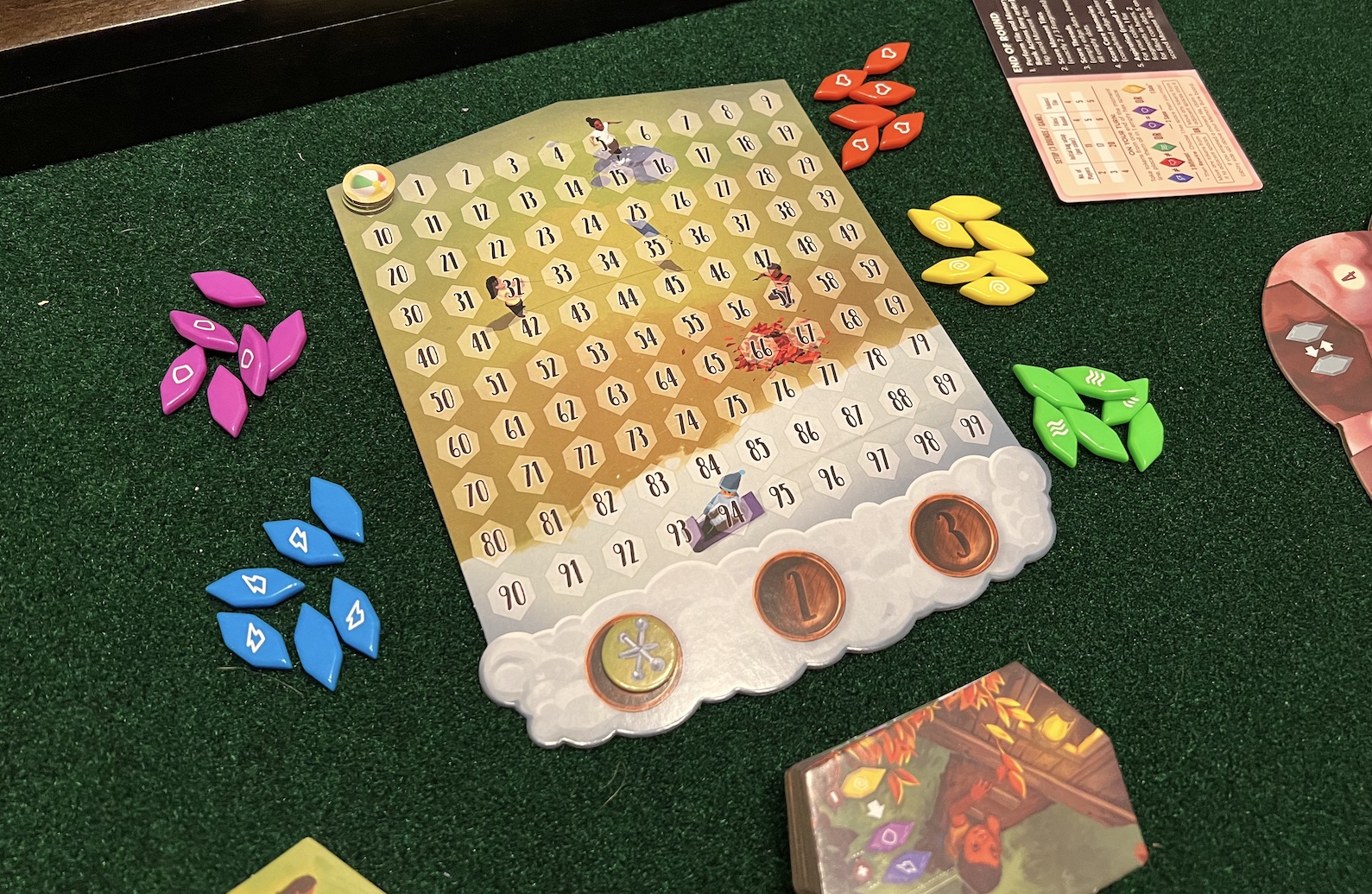 At the end of the third round, after all the typical round scoring is tallied, players flip over their aspiration tiles and reveal the color that can add to their score. There are three different ways to get points: one point for each hex with the matching color fragment, two points for each core memory slot with the matching color fragment, and five points for each ‘cherished memory’ tile (i.e. tiles that have been scored). Unlike similar games with player specific final scoring rules, our games had largely been determined before we got to the aspiration tiles. At no point did aspiration tiles swing the score to a different point leader.

And then, somewhat abruptly, the game ends.

Ultimately, Vivid Memories felt like it should play way simpler than it actually does, and allows for almost no possibility of course correction or recovering from a bad draft or missed play. The cheery, childlike presentation of the game belies how complex and determinative the gameplay actually is. After a few games, I was able to wrap my head around that complexity and start approaching something resembling a strategy. However it still felt like a disproportionate amount of effort for such a variable and unpredictable amount of gain, and three short rounds only served to exacerbate the problem.

Vivid Memories has the core of a good game, but it is often tripped up by how clever it gets with it’s theme. Harder than it looks, this tile drafting abstract strategy game has incredible artwork and decent components, but suffers from presenting the player with too many choices with mediocre outcomes. There is certainly fun to be had, but it may take some effort to get there.

Mike Dunn is the old man of Gaming Trend, having cut his teeth on Atari consoles and First Edition Advanced Dungeons & Dragons back in the day. His involvement with Gaming Trend dates back to 2003, and he’s done everything from design and code to writing and managing. Now he has come full circle, with a rekindled passion for tabletop gaming and a recent debut as Dungeon Master (nearly forty years after he purchased the original DMG).
Related Articles: Tabletop, Vivid Memories
Share
Tweet
Share
Submit