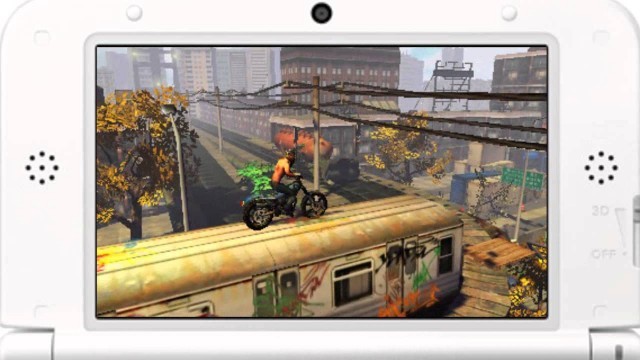 Urban Trial Freestyle is an action-packed, over-the-top motorcycling side scroller for the 3DS. The bad news about Urban Trial Freestyle is that it’s a shameless ripoff of Trials HD in just about every way. The good news is that this is not a bad thing to anyone who is a fan of that series, especially since Urban Trial Freestyle has the advantage of being available for a portable device. The game makes tweaks to a formula that many players have already become accustomed to and is an enjoyable ride overall.

Urban Trial Freestyle’s biggest weakness is that it lacks originality in a big way. Sure, Trials HD didn’t exactly blaze any trails when it came out, but Urban Freestyle copies everything from the controls right down to the track editor. This was somewhat of a difficult objection for me to overcome, because while it was like the Trials games I’ve known and loved, it failed to deliver the full experience. There are far less levels, the gameplay isn’t as polished, the map editor is less sophisticated, and all of this can make the game feel like a cheap knock-off. If anyone feels the same as I did upon first booting up the game, I encourage them to put aside the initial awkwardness they feel and just wait—it gets better. Although it can be disappointing when compared to some of its non-portable competition, Urban Trial Freestyle is fresh enough to differentiate itself from its inspirations and deserves to be judged on its own merit.

Urban Trial Freestyle is a trial game, which means that you want to get through levels as quickly as possible, or face the wrath of your friends telling you that you are an inferior organism. This is enhanced by something that the other trial motorbike games don’t have: stunt challenges, which are mid-level feats that the game monitors for the even more ambitious players who have hopes of further dominating leaderboards. These can range from jumping higher, or farther than other players, to overcoming obstacles more efficiently. And of course, there is also the matter of self-mutilation, which tends to be a hallmark of motorbike games. Indeed, players can expect to be given various opportunities to observe the protagonist meet his demise at the hands of explosions, giant boulders, and very long falls.

The gameplay in Urban Trial Freestyle is frantic, exciting, and fun from beginning-to-end. Levels are challenging and unique, and it’s easy to lose oneself and play the whole thing in a single sitting if you have the skill to tackle the game’s increasingly difficult courses. The controls are easy-to-learn and although the touchscreen is only used in menus, so everything works more-or-less how you’d expect. The controls aren’t as tight as the console-based trials games, and this could simply be that the 3DS isn’t a huge piece of hardware and not the easiest to hold if you a fully-grown, fully-perspiring adult, but they do the best job I could imagine them doing on a handheld device.

The sound in Urban Trial Freestyle is forgettable at best, as there doesn’t seem to have been much effort put into it, and at worst you will be annoyed by the repeated engine revving. The visuals, on the other hand, are quite good for a handheld game. The 3D is above par compared to most games on the platform, and it doesn’t distract the player too much from the action on the screen. You may become cross-eyed for a second or two as you tilt the screen during blissful gameplay only to find that the 3D graphics blur and become dizzying, but it’s not enough to cause any real problems (there IS an off button, after all). The worst part of the game’s visual presentation are the menus, which are simply a mess. Nothing is easy to find or understand, and it looks pretty chaotic and poorly-assembled.

Urban Trial Freestyle’s greatest strength is that it’s available for just around $5. With 20 levels, an entertaining course editor, and a console-comparable experience available on the go, Urban Trial Freestyle is a great value for the competitive gaming souls among us. Sure, the game doesn’t bring a whole lot new to the series, and better experiences can be found elsewhere, but Urban Trial Freestyle manages to stand on it’s own against the various motorbike trials games out there, and that’s nothing to shake a kickstand at.