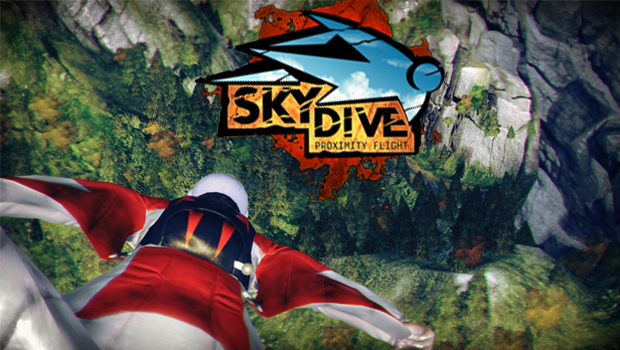 I’m just going to take a stab at this and assume you’ve never been base-jump proximity-flying in a wingsuit before. Because, unless you have at least 200 freefall skydives in the past 18 months with a minimum of 50 or more base jumps under your belt, most skydiving schools won’t even consider you for a license to wingsuit base-jump. For the average gamer, jumping off the side of a mountain wearing fabric wings is as foreign a concept as kicking a guy to the ground and stealing his sports car before robbing a bank. So, I guess it’s a good thing we have simulators like Skydive: Proximity Flight.[singlepic id=16473 w=320 h=240 float=right]

Base jumping in a wingsuit is often described as the closest thing to actual flying, and that’s exactly what it feels like while you’re playing this game. It’s a truly unique gaming experience that you honestly can’t find anywhere else, and it’s a little hard to describe. You start each level – whether it be a race against the computer, a challenge course or a freestyle map – atop a cliff overlooking a vast, beautiful mountainscape. You see miles off into the distance until you decide to jump off the cliff. The wind rushes past and you see your arms and legs bobbing as they struggle to stay taut. You dive straight down and see the rocky terrain whizzing mere inches below you. Raising your arms, you catch the wind just in time to rise up and splash through a waterfall at the entrance of a cavern cutting through a mountainside. After soaring at blinding speeds over the tree tops, you reach a clearing and finally open your parachute for a safe landing. It’s a virtual experience and, when coupled with the use of motion controls, it can be very convincing.

[singlepic id=16450 w=320 h=240 float=left]Skydive: Proximity Flight is a wonderful simulator of an experience I’ll probably never have the means to actually live through. But beyond that, there’s not really much more to it. It’s obvious the developers at Gaijin Entertainment put a lot of care and effort into making this as realistic as possible, however this commitment to realism over gameplay does remove from its replayability. It feels more like a base-jump simulator than an arcade game. Which is fine, just as long as you know what you’re getting into. Don’t come into this expecting SSX-style arcade gaming because that’s not really what this game is about. While the challenge maps and racing courses do offer a small sense of an arcade experience, what you’re mostly going to get from this title is a virtual sim of flying in a wingsuit really close to a mountain.

The graphics are beautifully rendered and detailed without noticeable slowdown, even as the mountain whizzes by at a hundred miles an hour. It really does look great. You might even want to just fly for the sake of sightseeing, which you can actually do by selecting the free flight game mode that offers weather and time-of-day customizations.

There are four viewing options during flight. Besides the default third-person view from behind your character, you can choose to view from either side of the character, or even from the first-person perspective which is as gorgeous as it is stomach churning. I’ve never wanted an Oculus Rift as much as I do now after playing this. Unfortunately, it is difficult to keep your character from hitting the mountainside using any other view aside from the default third-person since it’s hard to judge where your body is in relation to the obstacles.[singlepic id=16451 w=320 h=240 float=right]

The in-flight display could use more detail. I was surprised to find that there is no altitude indicator or even a speedometer on-screen. This information would be highly beneficial, as it can be sometimes difficult to judge how fast you’re going when you’re flying above the earth without a point of reference. This may very well be an intentional choice of the developers, as this information may not be readily available in the real situation, but I would still find it useful for a simulator where you’re racing other opponents and every second counts. The little missing details like this make Skydive: Proximity Flight feel more like a part of a full game rather than a complete, standalone title.

The controls are intuitive but frustratingly difficult to manage when faced with sudden turns at high speeds, making this an unforgiving and difficult title to master but also rewarding when successful. Certainly one of the most attractive features is the game’s use of motion controls. Using two PlayStation Move controllers – one in each hand – you can pitch and lower your arms to steer and dive your character along the cliff side as you make your rapid descent. It’s great when it works, and using your arms to steer truly adds a new level to the virtual experience.

[singlepic id=16452 w=320 h=240 float=left]However, the motion control calibration is a bit lacking. Most PlayStation Move games that require arm gestures use a calibration system that shows your image on the screen so that you can make sure you’re positioned correctly in relation to the camera. Here, you’re simply asked to spread your arms out like wings and to hit the x button, with no indication of whether or not you are properly positioned. This can create problems if you’re diving and not being picked up by the camera, and I was constantly struggling with an error message prompting me to re-position myself because the sensors were not being detected. A simple screenshot of the camera’s viewpoint during the calibration could help fix this.

I’m also always disappointed when a game fails to utilize rumble controls. The Move controllers and the DualShock 3 both have rumble functionality options that could greatly enhance the experience of flying against wind resistance and I feel the developers missed a great opportunity by not including this option.

Steering by flapping your arms can be disorienting at times since your character is spread flat whereas you, in your living room, are standing. It takes some getting used to. Luckily, you also have the option to steer using the Sixaxis controller’s tilt detection. It’s not as fun but it is easier and more accurate for the most difficult of stages. Actually, this is probably the best use of the Sixaxis tilting system I’ve ever experienced, which isn’t saying much considering how rarely it’s used on the PlayStation 3. And of course, you also can still just use the basic left analog stick to navigate – but honestly, where’s the fun in that?[singlepic id=16453 w=320 h=240 float=right]

As far as the audio goes, it isn’t amazing, but it gets the job done. I found the default heavy-metal rock music to be a little off-putting and I was glad for the option to turn it off. I much prefer the serene and calming sounds of wings flapping in the wind and the roar of the mountainside passing underneath.

To unlock the most prized characters with raised stats in speed and maneuverability, you’ll need to complete a series of challenge missions that vary from doing a sequence of tricks before landing to passing through a number of hoops without crashing. It can sometimes be tedious and, at the worst of times, I was painfully reminded of that terrible N64 Superman game. One of the most obnoxious challenges requires you to travel nine kilometers before landing, which doesn’t sound like much until you’ve been holding your arms straight out to the sides for over three minutes, only to fail and be asked to do it all over again. I seriously attempted this mission five times before giving up and moving on. That’s a long time to be holding out your arms while staring at a screen.

But despite the frustrations, the challenge courses are probably the most enjoyable in the game, mainly due to the fact that this is the only mode that has a set standard of goals and achievements to obtain.

[singlepic id=16454 w=320 h=240 float=left]The race mode is a good idea in theory but it doesn’t hold up very well in practice. Unlike with car racing, there isn’t any race track or even a general route laid out for you to follow. You’re literally flying off a mountain with really no rhyme or reason to dictate your course. Unless you’ve played each map enough times to be familiar with it, you’re forced to follow the computer-controlled players in order to know the fastest route. This, of course, makes being the first one across the finish line difficult to manage.

It may sound like I didn’t enjoy Skydive: Proximity Flight but that’s actually not the case. It can be extremely fun and there’s a real satisfaction from pulling off a difficult dive. Even with all its faults, I still recommend this game for anyone with a PlayStation Move who is interested in base jumping, or for anyone simply looking for a unique experience. Skydive: Proximity Flight may be lacking all the bells and whistles of more popular arcade titles, and at times I did want a little more variety or maybe even just a missile launcher or two. But that’s not what this game is about. What you have here is a fairly realistic and engaging simulator of an experience that most of us will never try due to an overriding sense of self-preservation. And maybe that’s enough.

Skydive: Proximity Flight was reviewed using a retail code provided by the publisher.