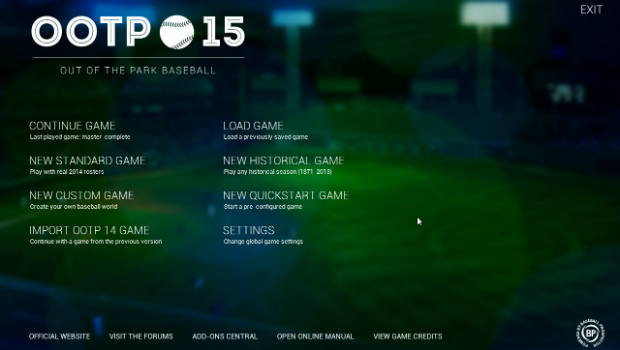 Sports video gaming has always been about capturing the reality of the sport as closely as possible.  Technical advances have made games like Sony’s MLB The Show series so visually accurate that you can almost taste a tobacco plug tucked neatly in your lip.  How is it, then, in this age of next generation spectacle graphics and painstaking physics molding that the most realistic baseball game on the market comes with graphics that would make a Super Nintendo game giggle?  While perhaps hard to believe for most, Out of the Park Baseball 15 is that game.  The popular baseball simulation title has always been triumphantly championed for its deep attention to detail and appreciation of the nuances of the game.  This latest release introduces some new functions and improves on others, dipping their gold standard game in a coating of pure gaming platinum.

Out of the Park Baseball 15 puts the player in the General Manager’s seat, tasking him or her with the day-to-day operations of their baseball franchise.  Signing key free agents, setting the correct line-ups, re-signing young prospects and scouting the future are just a subset of the items on the agenda.  Making the right choices can help a team win it all, but poor performance from the GM will extend to the play on the field.  If the totality of baseball operations is too much, tasks can be delegated to AI coaches who will make decisions for you, either in or out of the games themselves.  The inner workings of OOTP15 are largely flawless and easy to use and understand.

Play can be done in any year that baseball has existed, either with a current year game of a historic game for those wishing to recapture the past.  You can choose to manage the best team in the major leagues all the way down to the worst team in single A Korean leagues, allowing for any path you’d like to greatness.  A large community of fellow OOTP players keep the game updated with logos and uniforms, making up for a lack of any league licensing.  If players choose, they can start a game in a completely fictional world, with created teams and generated players.

The most impressive part of Out of the Park Baseball 15 is the deep and unique world in which the game takes place.  While most sports games (with their official licenses and the expectations contained within) completely ignore what sports figures do when they aren’t in the game, Out of the Park celebrates it and uses the different scenarios to affect the lives, decisions, and play of the players.  Your star pitcher may find himself injured in a car accident, or under investigation for substance abuse, or suspended for fighting a fan.  A star position player may demand more money in his contract because of a poor decision he made in his life, rather than in the game.  This appreciation and inclusion of what can go “wrong” with ball players is simple brilliance.  Not only does it add another level into what a player must consider when making decisions, it makes fictional baseball players in the game more well-rounded as characters rather than just numbers and stats.

The look of the game has been updated greatly, while the feel and functions remain greatly the same.  Statistic, news, and other menus are easier to read and navigate.  Many of the look changes are minor, but one major change has come with OOTP15: the introduction of 3D player models and game presentation.  Players and coaches now have 3D faces, which look okay but not great, and during games play can be viewed on a 3D field.  There are no player models on this field, but a ball appears in play, giving some visual representation of the action. The players are represented with little player “cards”.  While not complete at release, OOTP Developments promises to continue to work and update their 3D functions, while teasing possible 3D gameplay and game replays.

The AI has also been improved, and while the specifics are hard to notice it is clear that smarter decisions are made while you’re away.  In last year’s Out of the Park, a victory was almost always secure if you managed the game itself, while a full simulation would likely end in defeat. Now, both are more equal in terms of possibility.  A new player rating system and a higher number of league options deepen the full world creation possibilities. Lastly, 7 real life leagues (and their players) are available, including the American, Japanese, and Italian leagues.

Out of the Park 15 is not only a great baseball simulator, but approaches all-time great sports game, period status. It is the only sports simulator on the market that tries to capture the nuances of both on the field gameplay and off-the-field life and decision making. It goes far beyond trying and succeeds masterfully in both accounts. With its dedication to pristine simulation now joined with a step into 3D visualization, a deepening of real world leagues, and improvements across the board, Out of the Park 15 absolutely knocks it out of cliche park. If the promises of 3D game display comes to fruition, it will be the last step in the game’s ascension to the top. This gem of a game is absolutely worth anyone’s time who loves the sport of baseball, sport itself, or has even ever played a baseball game, digital or otherwise.