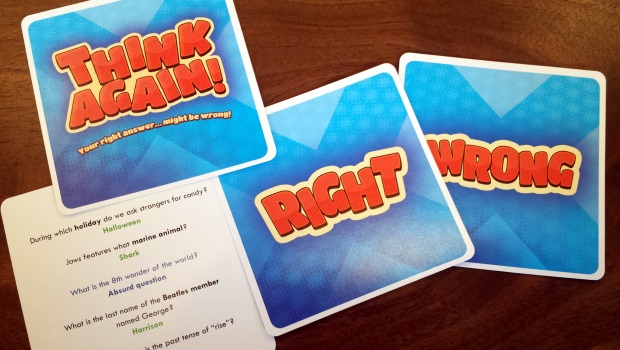 It’s hard to make a memorable trivia game. Hobbyist gamers scoff at them, so designers seldom include any mechanics besides roll-and-move. There is always one “smart guy” at the table. You know who I’m talking about. He dominates the game not because he’s the smartest, but because he knows the most useless facts about pop culture. French designers Bruno Cathala and Ludovic Maublanc (Cyclades, the Mr. Jack series) have created a trivia game where reaction time, line-of-sight, and following directions are more important than knowing the answers. THINK AGAIN! (published by Iello) is the most innovative trivia game in years.

The questions in this game are “trivial” in the truest sense of the word – insignificant. You can assume everyone at the table knows the answers, but knowing the answers isn’t the point. The game is a real-time free-for-all. The first player to speak is the only one whose answer is considered. Players score points by giving the “correct” response, but sometimes the “correct” response is actually the WRONG answer to the question (although it must be in the same category as the right answer). The player who scores the most points is the one with the best situational awareness.

You get 50 square cards with six questions on one side and a symbol on the other. Three of the symbols (the word “right”, a green circle, and a picture of a smart guy) tell the players to give the right answer. The other three (“wrong”, a red square, and a village idiot) tell the players that the “correct” response is a wrong answer in the same category. If the question is, “In which state is Los Angeles?” and the asker holds up a card with the red square, then “California” would be the incorrect response, and would cost the player a point. Any other state, such as “Louisiana” or “Nebraska,” would be a correct response.

The print on the cards is a little small, but it’s not a big deal. You need good lighting anyway, so you can clearly see the symbols on the card backs. The only other issue I have with the cards is that the smart guy and the idiot aren’t easy to tell apart from a distance. To fix this, I pull one of each from the deck and lay them out on the table so everyone can see.

The only other components are five additional cards with the rules. I wish they were in a booklet instead. It’s only a matter of time before someone shuffles the rules into the rest of the deck.

There is one bizarre twist that makes THINK AGAIN! special. About half the cards have an “Absurd Question” which doesn’t have a proper answer. In this case, the only correct response is, “Think Again!” For example: “The Statue of Liberty is located in which Canadian city?” When this comes up with the “wrong” symbol, players will reflexively jump in with a city other than New York that is not in Canada. But this is an Absurd Question: the Statue of Liberty isn’t in any Canadian city, so unless the player responds with “Think Again!” they’re going to lose a point.

The real-time nature of the game rewards only the fastest response. Players are going to get used to the regular questions, and prepare in their minds both a “right” and “wrong” answer while the question is read, and respond immediately once the symbol is revealed. I’ve been tripped up a couple times by answering first, without considering that the Absurd Question has no legit answer.

My lovely companion pointed out that the right/wrong mechanic in THINK AGAIN! resembles a 19th century parlour game called The Ribbon. The players stand in a circle, each holding the end of a long ribbon. In the center of the circle is the hostess, holding the other end of all the ribbons. When the hostess says “let go,” the guests are supposed to pull on their ribbons, and when she says “pull,” they are supposed to let go. People are used to following instructions, and it is hard to short-circuit your own instinct.

Nineteenth century sources describing The Ribbon are just as surprised as we are that the game is ACTUALLY PRETTY FUN. Today, party games have replaced the parlour games of old, and this underused mechanic still holds up today.

What isn’t so fun is when some of the players can’t see the right/wrong symbol and can’t answer in time. This isn’t an issue when sitting at a round table, but when played at a rectangular table, players have to adjust their seats in order to see what symbol the card reader is holding up. The line-of-sight issues are a downside only for the hyper-competitive. Those people should be playing another game. Those of you with sub-optimal seating arrangements can make a meta-game out of it: who can persuade the asker to show the symbol to your side of the table first?

Every gamer should have some party games in their collection. THINK AGAIN! is one I recommend. This is the only trivia game I know of (besides Wits & Wagers) in which the advantage doesn’t go to the player with the most knowledge. The right/wrong mechanic makes reaction time the most important skill.

If you are dead-set against party games, that is a discussion for another time. If you don’t like other trivia games, you’re in luck! This is nothing like any other trivia game. If you want to avoid discussing politics with your kooky uncle after Thanksgiving dinner, THINK AGAIN! gives you a great alternative.

This isn't a gateway game that will draw non-gamers into the hobby, but it is a quick, fun, solid experience that avoids the monotony of run-of-the-mill trivia games.