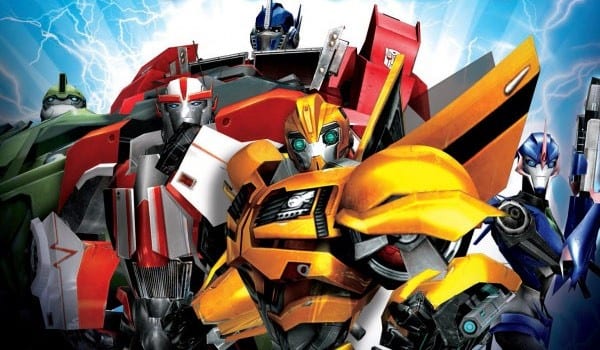 Licensed games get a bad rap. You take a popular intellectual property like a hot summer blockbuster or popular kid’s show, throw in some half-baked gameplay concepts, sprinkle in some characters and voice actors, and voila: instant money. Very few licensed games can rise above the mold, stand out from the stream of mediocre tie-ins, and actually be able to stand up on its own merits. Transformers: Prime for Wii U is not one of these games.

[singlepic id=9987 w=320 h=240 float=left]Modeled after the reboot of the 1980s cartoon show/toy advertisement, Transformers: Prime follows those famous robots from outer space and some useless kids as they try to prevent Megatron and the Deceptacons from reviving Thunderwing. I think, anyway; I honestly couldn’t confirm any more than that based on what I played. While I’ve been told from numerous sources that the actual show is quality, the story of the game is incredibly disjointed and scattershot with only the smallest thread of context tying everything together.

The vague story is broken up into thirteen distinct levels, each stage featuring one of a handful of Autobots, letting you play as Optimus Prime, Arcee, Bumblebee, and more. Which Autobot you’ll play as ultimately doesn’t matter because other than the obvious cosmetic changes, each Transformer controls exactly the same. You’ll battle the same three or four different enemies ad nauseum during each level, mashing out the same three combos over and over until you deplete their life bars, occasionally pressing the “upgrade” button once the bar is full to unleash more powerful attacks or transforming into a car to move faster through the small and barren levels. Boss battles and driving sequences break up the monotony somewhat, but bosses don’t really amount to much more than predicting a set of patterns and jamming the attack button once they drop their defenses. The driving levels turn the Gamepad into a steering wheel and task you with maneuvering your way around perilous explosions and barriers. The fact that these sections are actually more fun than the battling is made even more depressing by the fact that they make up about fifteen minutes of the entire game.

[singlepic id=9986 w=320 h=240 float=right]Transformers: Prime lacks the depth found in other, more well designed brawlers. There’s no experience system, no new moves or abilities to learn; you’ve got your toolset of moves and attacks from the onset, and by the end of the first or second level, you’ve seen virtually everything this game has to offer, outside of the actual levels themselves. This lack of depth makes the brief length actually merciful; each of the thirteen levels will usually last anywhere from ten to fifteen minutes, bringing the total playtime to around three or four hours with the cutscenes. There’s a little bit of replay value in some hidden medals and additional objectives each level has, but completing these objectives only reward you with additional character galleries and concept artwork. There’s also a local multiplayer – nope, no online multiplayer – mode, allowing you to fight against the computer or a human opponent, but it’s largely pointless.

As this is a Wii port, Transformers: Prime doesn’t exactly push the Wii U hardware, though that isn’t to say it doesn’t look nice. Environments look distinct, if a tad generic, but the Transformers have a unique style that shines through despite the fact that the game looks like it was just upscaled from the Wii version. About the nicest thing I can say is that the overall experience is pretty polished; I didn’t run into any major bugs or glitches, the frame rate stays consistent, and controls are fluid enough to work. Plus, you get all of the voice actors from the show, including the voice of Peter Cullen’s iconic Optimus Prime. It’s all decent, but the story does not serve the voice acting one iota.

The Gamepad isn’t put to terrific use either, featuring basic level stats and a button that lets you activate your upgrade ability. It does let you switch screens however, letting you stream the game to the Gamepad instead of the TV, which is a nice touch.

[singlepic id=9985 w=320 h=240 float=left]There are only two potential audiences I see for this game: small children with incredibly short attention spans and Transformers fans blinded by nostalgia. It’s an incredibly expensive way to waste a few hours; time that could be spent on much more entertaining games. I don’t care how big of a fan of Transformers you or your child might be, you’d be better served by grabbing the far superior Fall of Cybertron or just spending the fifty dollars on some Transformers figures; I guarantee you’ll get more hours of fun out of them than you will this game.