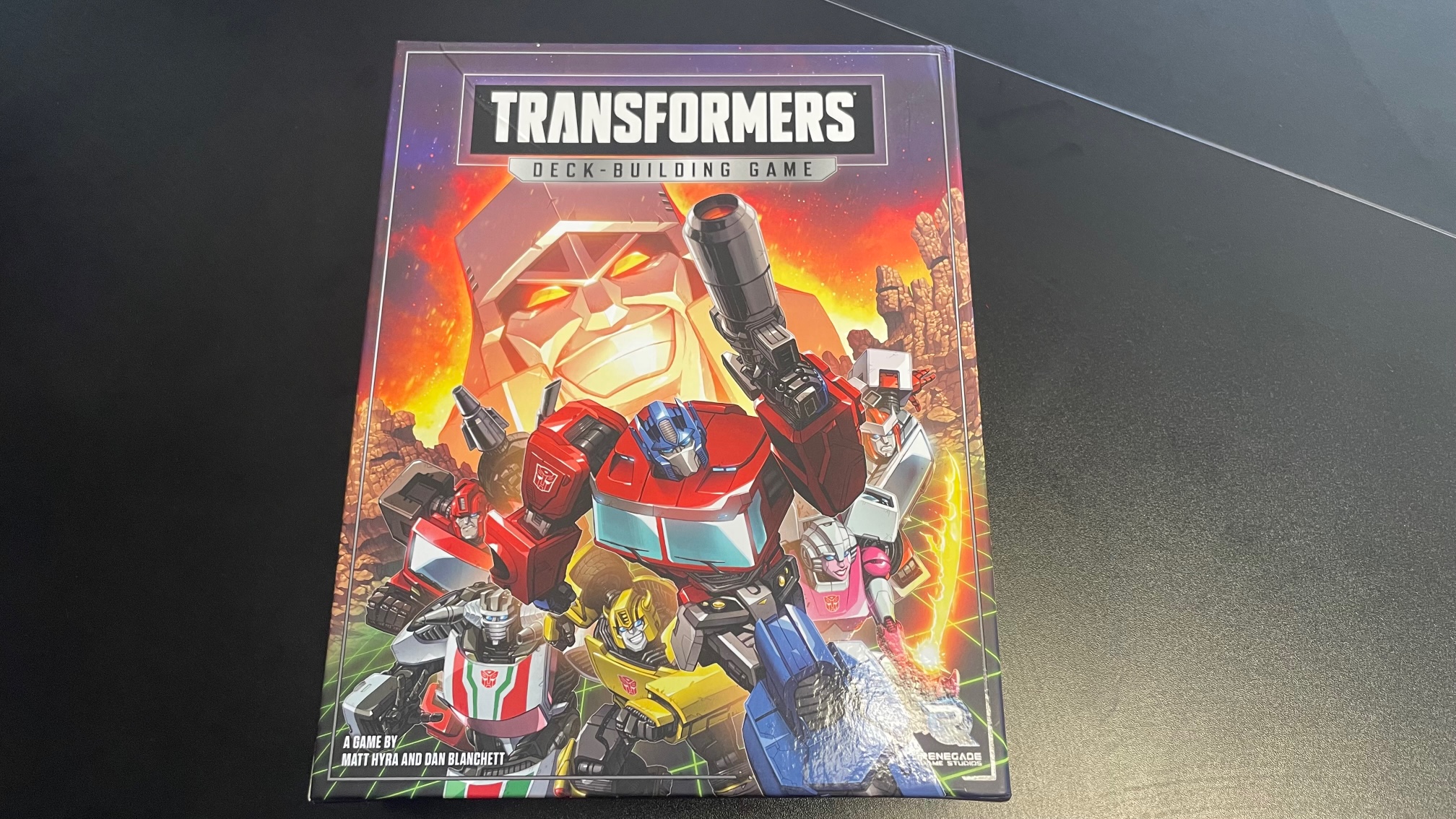 With the Transformers Deck Building Game, the folks over at Renegade set out to bring something fresh to the oversaturated deck building genre. However, while offering some interesting mechanics, the game ultimately falls short of greatness, and not even the Transformers themselves can save it. The Transformers Deck Building Game is semi co-op between the players as Autobots competing for the most victory points and Decepticons. Players can compete for points to be the best Autobot at the end or play purely co-op with some added co-op events thrown into the deck. 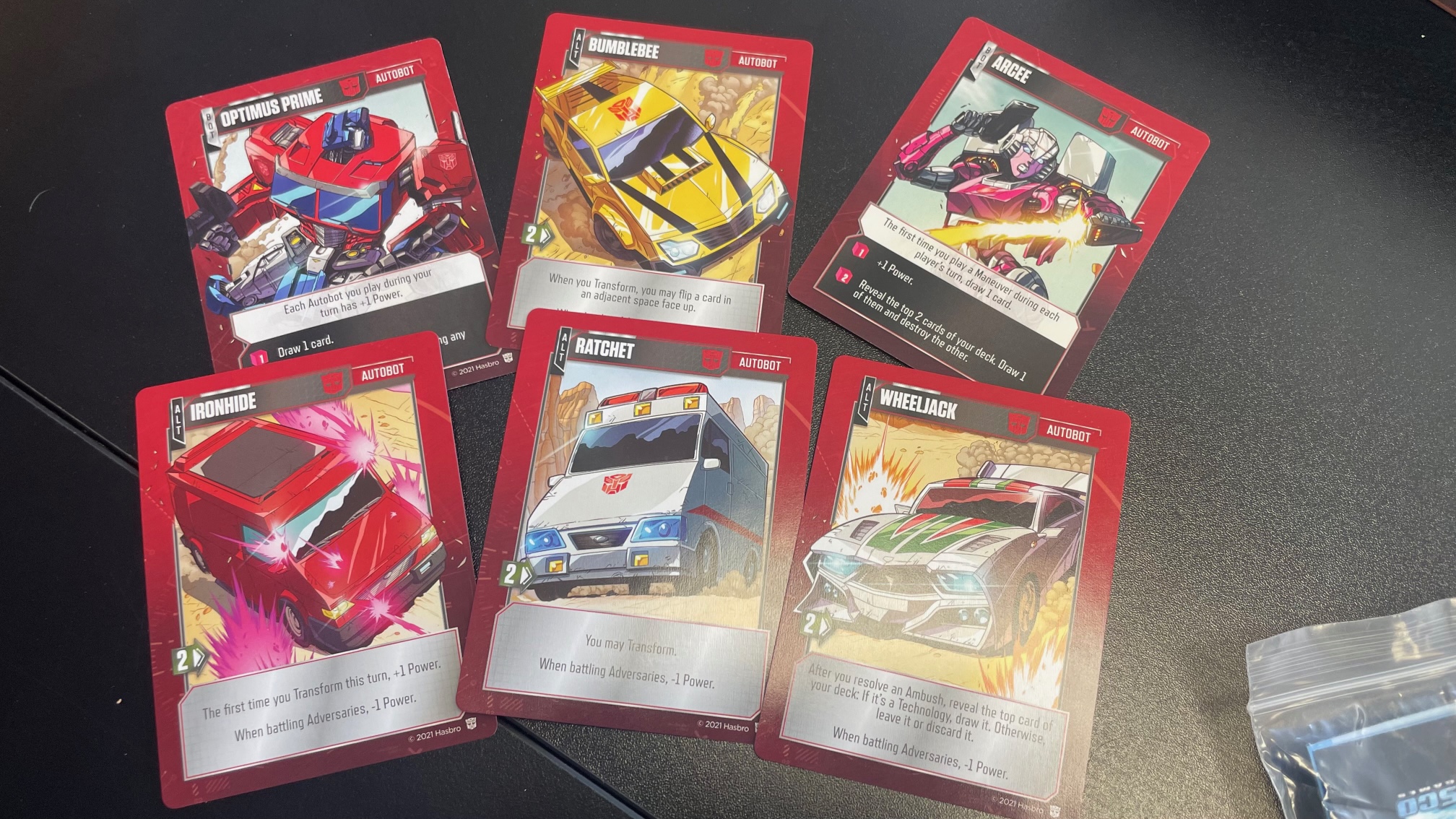 With so many deck builders on the market, new games have to offer something unique to stand out and be worth your time. Transformers attempts this by borrowing the card flipping hero/alter ego mechanic from Marvel Champions and then turning the standard deck builder card market into a grid you have to explore throughout the game. The grid offers new cards to add to your deck, sites to discover, enemy schemes, and Decepticons to fight. In this, the game succeeds. The evolving market used as the game board is a novel approach to deck building that I haven’t seen before. Moving around the grid and choosing where to explore is pretty exciting compared to your standard stale market row. Swapping between your Autobots vehicle and mech forms gives you different strategic options for moving and fighting on the grid. You can spend precious energon to transform or acquire new cards for your deck to make the transformation easier. Transforming multiple times as you move around on your turn is thematic and just fun. 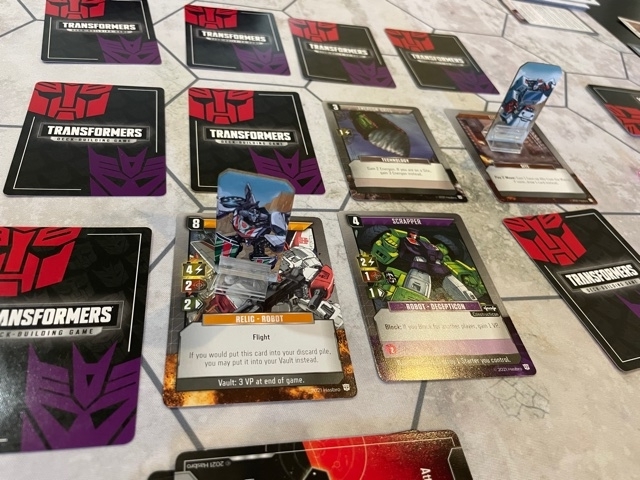 Unfortunately, the fun begins and ends with the market. New cards in this game are all between 3-5 cost for allies, autobots, techs, and movement abilities and 8-9 cost for relics. This means at the beginning of the game, the deck building is very slow. You start with a 10 card deck, and chances are good you can draw 3 power to buy a card, but only if you can find one. While the grid is cool to move around, its downfall is the randomness of its construction. Because the grid deck includes every type of card, it’s possible you could explore and only encounter cards that you can’t actually buy. This happened in our games multiple times. Assuming you can buy a card, they just aren’t that good. You might pay 5 power for a card that only improves your power generation by 1. Few cards in the game offer bonus abilities you can activate with energon. How do you get energon? There are 2 energon drills, a starting card that grants 1 energon, 2 sites that trade a move or power for energon, and a couple of cards that give you one energon if you use them to block an attack. That may seem like a lot of options, but that’s before you know that all of the cards are not used in every game. If your shuffle and set up places the energon drills or the sites back in the box, then good luck. The block abilities are dependent on having that card in hand when you get attacked and then being willing to discard it as a block rather than use its main abilities on your turn. I played one game where I had 20 energon sitting around and another where I never had more than 3 the entire game. Here’s the thing though: even if you manage to keep up a steady stream of energon, using it is often lackluster. Its effects are often small and unimpactful like, draw 1 card, move 1, plus 2 power. 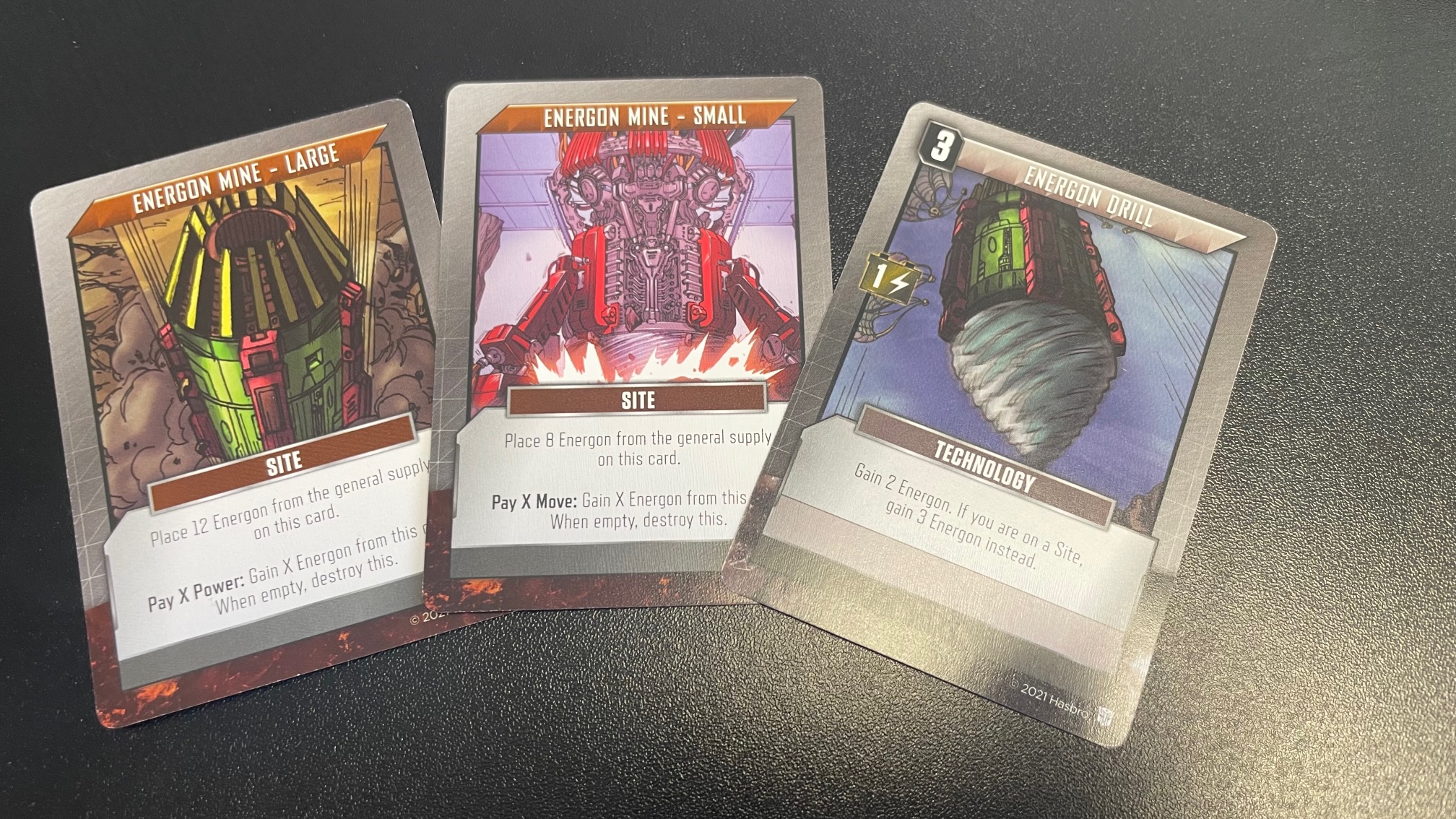 One of my favorite deck builders is Marvel Legendary. In Legendary, it’s possible to play 20+ card combos depending on what heroes are in the game (looking at you Symbiote Spider-Man). In Transformers, you will be lucky to draw a single extra card or rarely 2 if you draw just right. Without the potential for big combos or triggering exciting powers, the actual gameplay in Transformers is not exciting and feels more like an activity you have to finish. I wanted to see a  fight against Megatron that scales up and concludes with big combos and piles of damage like the Mastermind fights in Legendary. Your fight against Laserbeak in round 1 will be largely the same as your final fight against Megatron, just more annoying because the bosses hit you with a random effect that can either waste your turn or do nothing.

Transformers misses the mark on what makes deck building fun. The best card you can get is Optimus Prime, and even he isn’t exciting. There is little to no combo potential. You don’t feel much more powerful at the end than you did at the beginning. The grid is mechanically interesting but can’t save the lackluster deck building and card play. I’d let these Autobots roll on by.