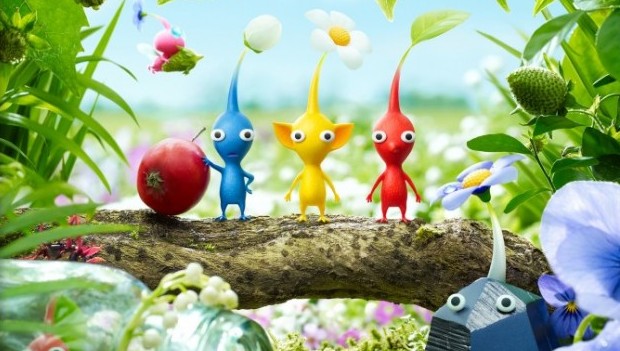 It’s been a long time since we’ve gotten a proper sequel to Pikmin — about ten years, in fact. Pikmin’s unique take on real-time strategy games — featuring diminutive plant people instead of squads of hardened soldiers — enchanted and delighted a relatively small, yet rabid fan base, who instantly clamored for more. Finally, after almost a decade and several delays, Pikmin 3 arrives on Nintendo’s newest console, hoping to finally give fans a reason to run out and buy a Wii U.

[singlepic id=14838 w=320 h=240 float=left]If you’ve spent any time playing either of the previous two games, then the basic premise will be immediately familiar. The planet Koppai has apparently been learning resource management tactics from the film Spaceballs, and is running drastically low on food. It’s up to intrepid astronauts Alph, Brittany, and their courageous captain Charlie to scour the galaxy and look for sustenance that they can use to not only feed their starving population, but also continue to grow more food and sustain themselves. An accident sends them careening off course and they crash-land on an awfully familiar planet inhabited by tiny plants known as Pikmin. With their cosmic-drive key lost and no way to get back home, it’s up to our heroes to use these Pikmin to help them defeat the myriad foes and obstacles they come across, find enough food to survive, and head home.

To do so, you’ll need to use your Pikmin strategically as they become the workhorse behind your self-rescue attempts. Throwing these little guys at everything will cause them to react in a ton of ways — they’ll attack the ferocious fauna that wants nothing more to gobble you up, they’ll pick up and carry important objects back to your starting location, and they’ll destroy any barricades that block your path — letting out delightfully cute squeals at each command. Picking up defeated enemies and taking them back to base will net you more Pikmin — and you’ll need many as you can get, as it’s really easy to lose them from enemy attacks, the various elements, or running out of time at the end of the day. You’ll quickly turn your handful of sprouts into a Pikmin army, and there’s a certain joy in pulling off a concerted attack against a massive bug then watching your little minions cheerily haul away its lifeless corpse that never gets old.

[singlepic id=14839 w=320 h=240 float=right]You’ve only got a certain amount of time (around 15 minutes, to be exact) to complete your objectives and collect as much fruit as you can each day before the sun sets and the nocturnal predators come out and eat you, so you’ve got to manage your time wisely. Each day consumes a canister of fruit juice. Run out of fruit, and it’s game over — though you can rollback to previous days to improve your performance, so you’ll never have to start completely over. Though, there’s so much fruit lying around, and most fruit will give you more than one day’s worth of food, that it’s really hard to run out unless you’re actively trying to fail.

Completing these objectives and progressing through your harrowing adventures requires prodigious and precise use of each of your Pikmin’s unique abilities. Red Pikmin are impervious to fire, Yellow Pikmin can harness electricity, and Blue Pikmin can swim underwater. New to Pikmin 3 are the Rock Pikmin, who deliver crushing blows to opponents and can destroy glass and crystal, and the Flying Pikmin, who have the greatest maneuverability and can lift objects off the ground, despite being much weaker than the others. These new Pikmin don’t add terribly much to the proceedings, but their inclusion does add a few new obstacles to overcome, and it gives you a reason to use some of the new features that help mitigate the complications that arise from trying to corral five different types of Pikmin.

[singlepic id=14840 w=320 h=240 float=left]Helping you micromanage you daily activities is the inclusion of two additional characters. Rather than running around with one little alien, you’ve got three, and you can split up your sizeable Pikmin population in order to multitask and reach previously inaccessible areas. There are spots where you’ll have to throw a group of Pikmin and one of the explorers across a chasm, or up a small hill, and let them run off and rebuild a bridge or push down a ramp so everyone can continue together. Other than a few of these moments, however, it’s not entirely necessary to split everyone up. The overabundance of fruit means time really isn’t as much of a factor as the game makes you think it is, though with proper planning, having three playable characters can speed things up considerably.

With so much going on at once, it can be a bit difficult and clumsy to keep up with everything just through button presses, and that’s where the GamePad comes in. A swipe of the touch screen pauses the game and shifts the game screen to an overhead view of the level. You can look around, see where your objectives are, and direct each of the three Pikmin wranglers with a simple touch.

[singlepic id=14841 w=320 h=240 float=right]It’s a real shame then, that the rest of the GamePad’s controls feel clumsy and imprecise. Using the analog stick feels sluggish, with movement lagging behind the aiming reticule, making simple tasks like making your Pikmin perform basic actions feel like a chore. Luckily, the Wii Remote and Nunchuck combo is more than capable at handling all of these tasks quickly and accurately. Launching your Pikmin is incredibly easy — just point the remote at your target and press the button — making complicated maneuvers, such as moving and shooting, fluid and snappy.

But that brings up a bigger problem, one that highlights the largest issues with “second screen” gaming. Playing with the Wii Remote means having to put down the controls entirely to view the map or interact with those moments where the game forces you to look at the second screen to watch incoming video messages. But strictly using the GamePad just isn’t that fun, so you’re either fumbling with two different sets of controls, or finding a way to prop up the screen next to you. Pikmin 3’s control solutions are completely at odds with each other, and they never really gel into anything truly satisfactory.

[singlepic id=14842 w=320 h=240 float=left]That’s not to say that Pikmin 3 isn’t fun, despite the somewhat lacking controls and evolutionary baby steps that it takes in developing the series. Wandering the lush forests, tropical jungles, and frozen tundras is a blast, as are solving the situational puzzles required to progress. While Pikmin 3 may be easy in terms of overall gameplay difficulty, there are more than a few tricky situations that will leave you scratching your head, wondering not only where you’re supposed to go, but once you’ve figured that out, trying to decipher how you’ll get your Pikmin there. It still maintains the formula from previous entries, but it’s a winning formula, and one we haven’t seen for almost a decade.

After completing the relatively brief and disappointingly anticlimactic eight to ten hour long campaign, there are still plenty of reasons to hop back in to Pikmin 3. There are dozens of challenge stages, ranging from collecting treasure, to defeating enemies, to boss fights, that can be completed by yourself or with a local co-op partner. These stages force you to complete your objectives under an incredibly strict time limit, and figuring out each stage’s maps and executing them perfectly for their platinum medals should add several more hours to your play time.

[singlepic id=14843 w=320 h=240 float=right]Rounding out the modes is Bingo Battle, a modified take on Pikmin 2’s fantastic multiplayer mode. In one-on-one or two-on-two matches, you’ll have to run around trying to grab as many objects as you can, while preventing your opponent from doing the same. The twist here is that you can’t just grab any fruit or marble lying around — you need to look at your team’s bingo grid, and connect four in a row. Each grid contains the same items, and there’s only one of each item in a given match, so teams will be scrambling back and forth trying to grab the one item they need to complete their bingo line. It’s a really fun addition — it’s just a shame that it’s limited entirely to local multiplayer.

It’s a bit disappointing that Pikmin 3 is so similar to its predecessors — especially since it’s been almost a decade since the last time we’ve had a chance to explore this world with our tiny plant friends. The limited innovation, the dissonance between control inputs, and the lack of any online functionality hold Pikmin 3 back from true greatness. Instead, Pikmin 3 will have to settle for being good — and good is just fine.