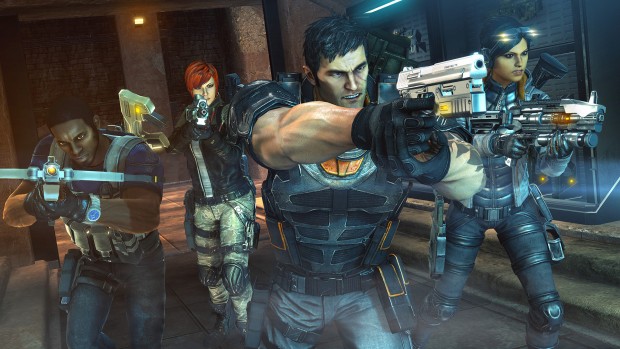 Fuse is The Hives of video games.

The Hives play loud and fast. They may not be the most technically proficient band out there, but they’ve got a certain raw kinetic energy most bands would dream of having. Howlin’ Pelle Almqvist struts out on stage with his best Mick Jagger impression, doing split kicks and swinging his mic around with such force that it’s a wonder it doesn’t fly off the cord and pelt someone in the front row. Their music may not be “deep” in any real sense of the word, but it’s damn fun to listen to, and you know they had fun playing it.

By now, I’m hoping the connection is starting to make a little sense.

Acclaimed developer Insomniac Games isn’t afraid of making games that emphasize big weapons, bigger bosses, and over-the-top gameplay, and Fuse represents their design aesthetic to a T. When someone has a job that needs to be done quickly, discreetly, and with a fair amount of plausible deniability, Team Overstrike gets called in to take care of it. And when Fuse — an alien substance that the government has “not” been experimenting on and weaponizing (wink) — gets ripped off from a government facility by an evil PMC known as Raven, only Overstrike has the skills and weaponry to find it and take it back before it is used to destroy every major city on the planet. The story isn’t going to win any awards, but it largely serves its purpose — giving context to the player as they scour the globe (and eventually, outer space), hunting down Raven and the purloined Fuse tech.

Fuse is at its best when four players are working together, reacting to enemy movement and developing strategies off the cuff. Like a band, each member of Team Overstrike fulfills a unique role. Dalton is the leader of Overstrike, though he’s more like the drummer, using his Magshield to not only protect his teammates from harm, but also to drive the tempo of their movement forward. More often than not, he’ll take point down corridors, covering the team from fire with his massive shield as they shoot at the enemy from behind it. Jacob’s like the bassist, backing up the ensemble as the sniper, melting foes from long distance with explosive bolts. This leaves Izzy and Naya as our singer and guitarist, as they will end up causing most of the direct damage to their foes. Izzy is the healer of the group, yet is able to hold her own with the Shattergun — a weapon that causes enemies to not only freeze into place, but also raise off the ground for easy target practice. Naya rounds out the team with the Warp Rifle — a gun that can suck any hapless victims into its vortex — as well as the ability to cloak, allowing her to sneak around the battlefield and silently take out foes from behind.

A co-op shooter lives or dies by the quality of its combat, and Fuse mostly succeeds by providing visceral, entertaining arenas that allow for experimentation and multiple avenues for strategy, and allowing players to take advantage of each operative’s unique strengths. Levels will take you across snowy mountains, the temples of India, and beyond. Each one has multiple sections swarming with snipers, heavy mechs, stealthy infiltrators, and shielded phalanxes. Taking down the giant mechs seems to take a lot longer than it should, but for the most part, working with four human players in synchronicity is highly satisfying — especially when watching the screen light up as experience point bonuses explode one after the other.

Working in tandem is not only the best way to make it through many of the tough encounters Fuse sends players’ way, but also paramount for best taking advantage of its character progression system. Each character will earn experience points for defeating enemies, completing objectives, or finding hidden XP caches throughout the levels. It’s possible to earn XP by working individually, but by using each weapon in concert with one another, experience point rewards multiply significantly. A simple kill may be worth only handful of XP, but taking them out through Dalton’s shield with Izzy’s Shattergun will earn much more. Further, each player that took part in the kill will receive some of the bounty. By making rewards dependent on working as a team, Fuse discourages playing as a lone wolf, while encouraging experimentation and exploitation of each character’s signature ability.

Earning XP will allow each operative to unlock various abilities on their skill tree. Some are similar between characters (weapon damage increase, Fuse grenades, Fusion) while others allow for improving each of their respective special abilities — Izzy can upgrade her heal beacon to increase weapon damage of players inside its radius, and Naya can increase the amount of time she can stay cloaked. Each unlock can change the way players approach a given situation, with Fusion being the most powerful one of all. This ability allows players to super-charge their Fuse weaponry, granting unlimited ammo as well as the potential (with further skill development) to instantly revive all downed teammates. Even after the eight to ten hour campaign, it’s unlikely that these skills will be developed to their fullest potential on a single play-through.

That’s where Echelon mode comes in. Similar to other wave-based modes from games like Gears of War 3 or Mass Effect 3, Echelon pits each of the four squad members against increasingly difficult rounds of enemies in arenas pulled from the campaign. Unlike those games, however, Echelon is far more arcade-y, and puts players on the offensive more often than not. It’s been compared to Smash TV, and the comparison is apt: as enemies fall under the Fuse-powered onslaught, buckets of cash spew forth, ripe for the taking. While players are working together to make it through all twelve rounds, Echelon mode also keeps track of the cash each player snags, adding an interesting competitive element on top of its cooperative underpinnings.

All of this sounds great, and under ideal conditions, it is. The cover mechanics may not be as polished as Gears of War’s, the climbing sections may not be as fluid as Uncharted’s, and some of the sound effects are a bit low-res, but using each character’s unique specialties in tandem is a feeling not many co-op action games can attest to. Things tend to get a little bit dodgy, however, when operating without actual humans.

AI will take over whenever there aren’t enough players to fill out a full roster, and for the most part, it does what it should — kill bad guys, and help out when it needs to. But I don’t have enough fingers to count how many times the AI partner closest to me would just sit there and shoot, while the furthest one away would make its way over to revive me, the clock quickly ticking down until my (and by association, my team’s) demise. Or watching Dalton hang back behind everyone else, making his shield all but useless. Or noticing that the team isn’t nearly as aggressive as it could be if they were controlled by human allies.

It’s apparent how much Fuse is about playing with other people when you have to deal with its menus. It’s easy to switch between inactive characters — just hold a button and choose the appropriate character’s portrait — in case certain situations require their use. But when the uncontrolled characters gain a level, it’s not as simple as hitting start and levelling up multiple characters in the same menu. Rather, each operative needs to be manually switched to in order to access their skill tree. It’s too many unnecessary steps and proof that Fuse is best played with other people, each player worrying about one character rather than four.

Fuse hits its stride when four real-life players are communicating with one another and is mostly above-average when playing with the AI. It’s not perfect, and it won’t set the world on fire, but it’s got some great ideas, and it’s refreshing to play a co-op game where each character feels distinct. Just remember to bring friends — like a Hives concert, this is more fun with other people.