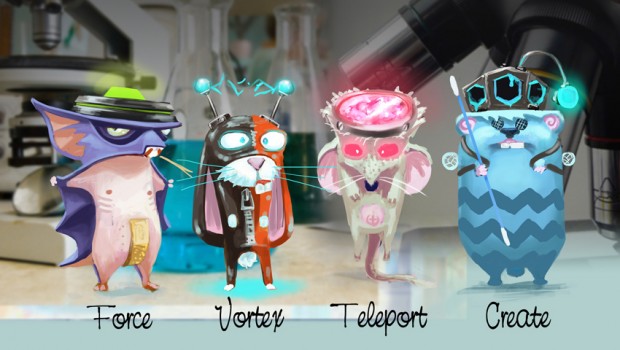 Getting together and playing video games with your friends is tough these days. Games are getting packed with more and more online features, leaving everyone who wants to sit next to their buddies and just plug and play stuck on the sidelines.  It seems our only hope of local co-op is to look to smaller developers’ titles, such as Tiny Brains from Spearhead Games, which attempts to satisfy that friend-to-friend itch with wild physics-based puzzle gameplay.

You play as the Tiny Brains, four super-intelligent and superpowered lab rats created by a mad scientist bent on world fame.  The game starts off as a test of the Tiny Brains’ powers, but as players progress, a tiny pink chick interferes with the doctor’s plans.

Players can switch and swap between the four mice, each with their own powers – consisting of pushing, pulling, swapping with blocks, and creating platforms – that can help solve each chamber, which usually requires players to move an electricity block into a specific socket.  Finding working combinations between each Tiny Brain isn’t very difficult, and learning how to use their powers is extremely intuitive.  The game can be played with anywhere between one and four players, which is a seriously impressive feat for Spearhead Games because each chamber has four different versions for different combinations of players.

Tiny Brains is a frantic and fun puzzler.  It’s not meant to extensively challenge your brain, and you’ll probably be able to figure out how to solve each stage relatively quickly.  The real fun is enacting your solution, especially when you factor in the anarchic co-op multiplayer.  I spent a lot of time instructing, shouting, and laughing into the cheap microphone that came with my PS4 when I wasn’t playing locally.  While it was still enjoyable carefully planning methods and solutions, it was just as much of a blast to have four people using their abilities at their own whim, praying for a ridiculous solution to occur by happenstance.  If you’re at all familiar with Paradox Interactive’s Magicka series, then you already understand exactly how and why this insane and inefficient play style can be fun.

You may not get that smug satisfaction you got after solving a puzzle that you got after figuring out a tough puzzle in games like Portal because of Tiny Brains’ relatively lower difficulty, but the end result is still enjoyable.

Combat is a quite bland, consisting mostly of either jumping on tiny chickens’ heads or using the push powers to force enemies into hazards.  There’re very few segments that used the combat exclusively, but those segments definitely slowed down the game.

It’s a shame there’s not a very large online multiplayer following for this game.  Finding a match took quite a while, but players can also start their own match and play through levels while waiting for a fellow player to drop-in.  The few times a stranger did fall through the cracks and into my game, we had a blast.

The real fun, though, is having a few friends play with you locally.  Nothing amps up the pressure of solving a puzzle when you know there’s someone willing to give you a stiff shot in the arm if you mess up a carefully timed solution.

Tiny Brains’ writing definitely helps the game’s comedic atmosphere.  The mad scientist’s clever lines and comically cartoonish Russian accent made me chuckle several times during my playthrough, and it helped make for a very endearing villain. Along with the cartoonish voice acting is also the infectious and fun, bouncing soundtrack, which definitely stayed with me as I toyed through the levels.

After completing Tiny Brains, there is plenty left to do.  There are collectible cheeses in every level, and with several challenge stages and time trials as well as an unlockable mode where you play as one mouse with all the powers of the Tiny Brains, you can find plenty of fun in Tiny Brains.

While playing through the game, I did run into a few glitches.  Sometimes my character didn’t respawn after dying, making it impossible to progress through a level.  Other times, I would just get stuck at the loading screen.  These problems, along with some framerate stutters, sometimes got in the way of my enjoyment.

Problems aside, Tiny Brains is an undeniably enjoyable experience. While it may not amaze you, it’ll definitely be worth your time if you and a few friends are looking to have a go at a co-op puzzle experience that isn’t extremely demanding.