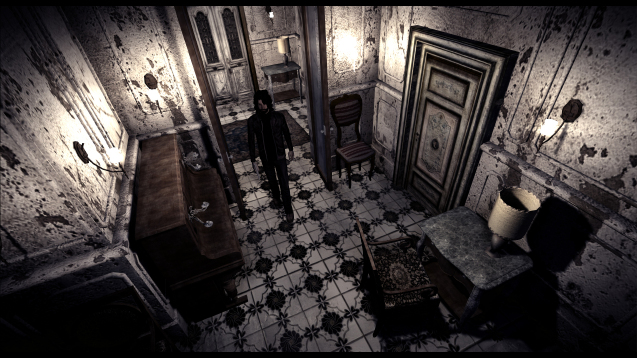 In 2005, three games irrevocably altered the survival horror genre. Through the 90s and early 2000s, survival horror had essentially followed the template laid down by 1996’s Resident Evil–relying on complicated storylines, dramatic camera placement, complex inventory management, and deliberately challenging controls. But then came 2005, and nothing was ever the same. Resident Evil 4 showed that fear didn’t require stodgy controls and static cameras.  F.E.A.R. combined the tropes of a J-horror movie with the action and adrenaline of a John Woo film. Possibly the most influential of all, Call of Cthulhu: Dark Corners of the Earth showed the world how to generate fear with little more than a well-crafted setting and looming sense of dread.

These are the changes the Italian game designers at XeniosVision sought to undo in BlackSoul.  Though intended as a loving throwback to the survival horror of old, BlackSoul perfectly illustrates why the changes forged in the mid-2000s  were so necessary–it highlights the worst tropes of the genre without capturing what made games like Silent Hill 2 such classics. Though it sets out to inspire fear, the only emotions BlackSoul succeeds in generating are boredom and frustration.

I’d love to tell you what BlackSoul’s plot is, but in all honestly I have no idea what to make of it. The story–such as it is–focuses on a brother and sister surviving a zombie outbreak in 1970’s England.  The only reason I know the two are related, or even that the game is set in England, is because I read it on XeniosVision’s website.  In the 7 hours I inflicted upon myself, I remember one single line of dialogue–and that was in the prologue. From then on, the player is given essentially zero sense of purpose or direction–the “plot” is merely a set of events, without any sense of drama or context. Who is the protagonist? Why is she wandering around a creepy, zombie-filled cemetery in the rain? Why am I still playing? None of these questions are answered.

[singlepic id=17541 w=620 h=350 float=]The complete and total lack of any major plot or characterization is a fundamental error.  Old horror games like Resident Evil and Silent Hill lived and died by their stories–the plot had to carry the weight of the awkward gameplay.  Without a captivating plot–or, indeed, any plot whatsoever–there is nothing propelling the player forward.

The biggest change between modern survival horror and the old-school classics is the tightening of controls–older games had clumsy, fumbling control schemes.  BlackSoul dutifully recreates this with a control scheme that is so slow, so completely unresponsive that even the menu screens fail to respond to your commands. Simply walking in a straight line is a challenge.  Combat is an exercise in futility and frustration.  Basic information-“is that zombie within the range of my attack?”–is denied the player, leaving you flailing away with your crowbar and praying you manage to hit the enemy before it hits you. And I get it: that’s the point.  But just saying “that’s the way Resident Evil did it” doesn’t make it a good idea. You don’t celebrate poor controls in a game, you tolerate them in service of something else.  Something BlackSoul does not have.

It only gets worse when you start to factor in the camera.  BlackSoul tries to combine vintage survival horror’s static cameras with the dynamic over-the-shoulder perspective of a modern 3rd-person shooters.  The two don’t mix well. The transitions are jarring, and the placement of the static cameras makes the combat an exercise in confusion and malice.

Perhaps the most disappointing aspect of BlackSoul is the puzzles–or rather, the lack thereof.  I say “most disappointing” because it starts off well–the first two or three puzzles you’re asked to solve require a certian level of thought and analysis.  But warning bells started to ring when I was forced to solve a puzzle involving a 4-digit combination.  After scouring the local environment, my inventory, and every scrap of paper or notation I could find, I was eventually reduced to using a brute force attack–trying every combination until I happened upon the solution.

Then again, at least that was a challenge. The rest of the puzzles I found were nothing more than “get key, unlock door.” The “key” might be a literal key, or it might be a random object you find in the environment, but the essential challenge never involved more thought than USE [OBJECT] on [DOOR]. To dignify them with the word “puzzle” gives them far more credit than they deserve.  More often than not, the prize for solving one key/door challenge was–what else?–another key.  By the time I lost patience with BlackSoul, I must have faced no fewer than five key/door challenges nested one inside the other like Satan’s own matryoshka doll.

[singlepic id=17540 w=620 h=350 float=]There’s not much else to say about BlackSoul–the visuals and audio are serviceable, though not great. It’s a game made by two people, so I’m willing to forgive the graphical shortcomings. The score, composed by Stephano Gariguilo, is actually quite haunting–or it would be, if each song lasted more than 30 seconds before looping.

There was real potential here.  Throwbacks don’t have to bad–games like Super Meat Boy, Blood of the Werewolf, and Scott Pilgrim vs. The World are proof enough of that. The trick is to refine  what made those older games enjoyable from the surrounding dross. BlackSoul does the opposite–it completely removes what made those old-school survival horror games fun in favor of aping their mechanical shortcomings. I suppose that makes BlackSoul horrifying enough, but not for the reasons its developers intended.

Though it seeks to mimic survival horror classics like Silent Hill and Resident Evil 2, BlackSoul fails to capture any of what made those titles great while highlighting their worst aspects.