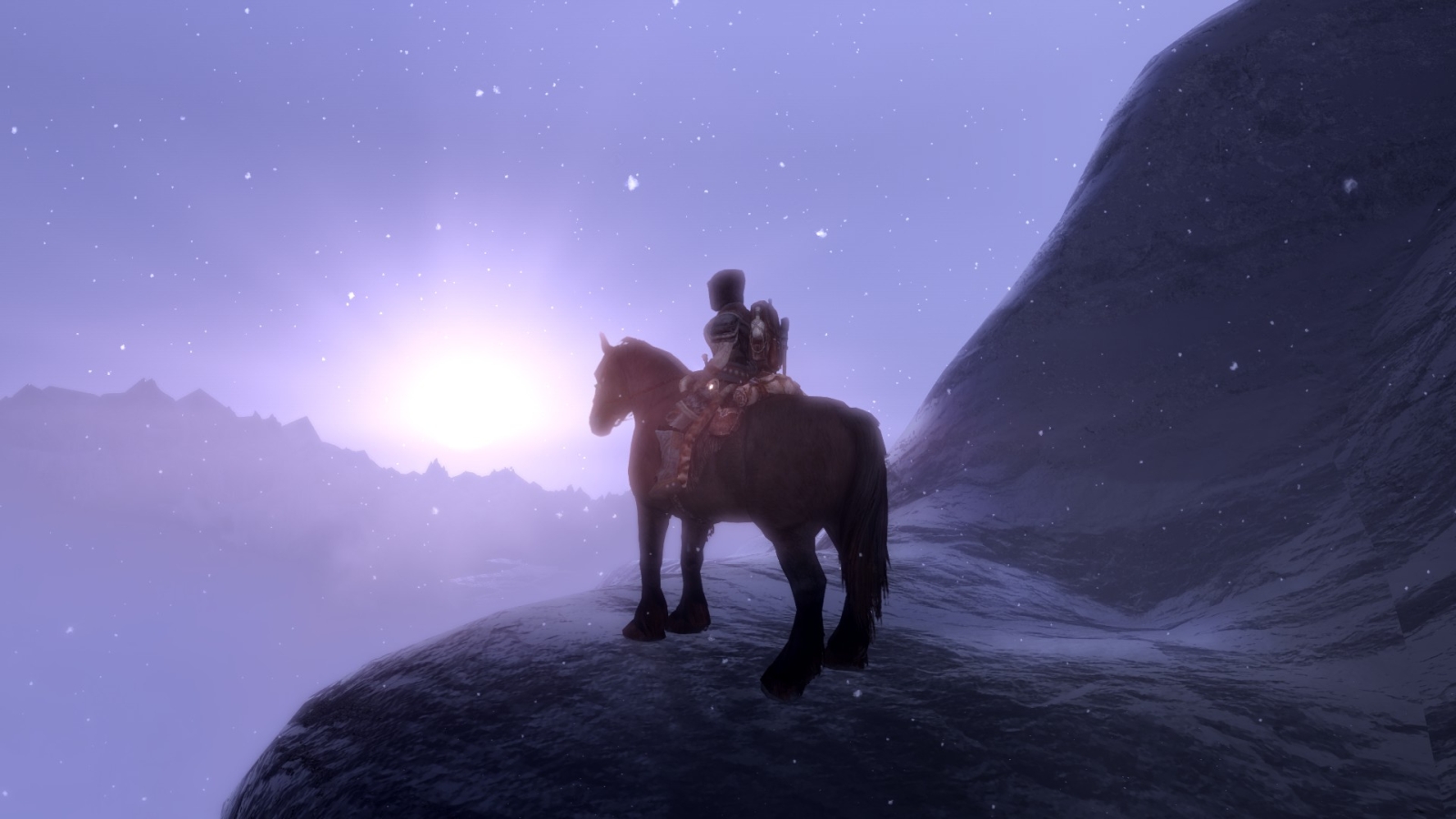 I have played a lot of Skyrim, and I mean a lot. My steam counter, which I no doubt broke a long time ago, perpetually sits above 400 hours while the special edition is just shy of 120. And this isn’t even counting playthroughs on console after snagging a copy when I worked at Bethesda along with the beefy ultimate edition guide and an amulet of Mara. I’ve also put my share of time into Oblivion and Morrowind, though less so – Skyrim just feels like home. It’s hard to believe it’s 10 years old at this point, even if I only grabbed it on sale a year or so after release. While the 2016 Special Edition was a much more substantial upgrade, Anniversary Edition celebrates this milestone with a DLC upgrade that gives you all of the premium Creation Club mods, along with a few free goodies for those not wanting to shell out $20. I started a brand new, lightly modded playthrough that I’m sure will continue well after this is published, but let’s see what’s here.

While it’s been available for a while, I enabled Survival mode for this playthrough which has you contend against the harsh environment of Skyrim to forage food, stave off the cold, and hopefully get some rest occasionally. Mods that serve this same purpose, such as Frostfall or iNeed, have existed for even longer but this fully integrates these mechanics into the game without the need for additional scripts. As you adventure, your character will slowly grow hungry and tired which will decrease your maximum stamina and Magika respectively. I assume if you starve and sleep deprive yourself, they will eventually die, but there are enough foodstuffs and beds around that I neve let myself go below half max. What’s more difficult to manage, however, is temperature. Skyrim is a very, very cold place, even in areas like the Rift and if the temperature gets low enough it will decrease your max HP. You can manage this somewhat by holding a torch, standing near a fire, wearing warm clothes, or finding shelter from rain or blizzards, but you won’t fully recover until you are back somewhere warm. I’m not sure if it’s just me, but the game also seems more difficult; enemies hit harder and have much more HP. I did not install anything to affect combat, and I even tested a vanilla save to be sure, but I enjoyed this change along with the challenge of survival, it makes the game feel fresh again.

Eventually though, I did turn survival off for two reasons: fast travel and carry weight. I actually enjoyed not being able to fast travel and rediscovering parts of the game I might have just passed by, but to get this done in time I couldn’t waste hours walking to Whiterun over and over again. The bigger issue is that survival severely limits your carry weight, almost cutting it in half it feels like. While I’m used to occasionally sorting my inventory, dropping less valuable items to make room for that cool sword I just found, Survival exaggerates this to a constant issue. It is incredibly frustrating when you can’t carry quest items because your equipment already fills up your inventory.

Skyrim finally became a real RPG with the fishing add-on! I was very excited for this, as someone who adores fishing minigames in RPGs like Tales of Arise, but it’s underwhelming here. You simply equip a fishing rod into your weapon slot, interact with the specifically placed fishing areas, and then reel in when your rod dips. You can’t pick bait or anything and there’s only one type of rod, so the only thing that determines what fish you catch is luck and maybe location. It’s an interesting way to get food for Survival mode and allows you to appreciate the landscape, but lacks any sort of depth to make it interesting. 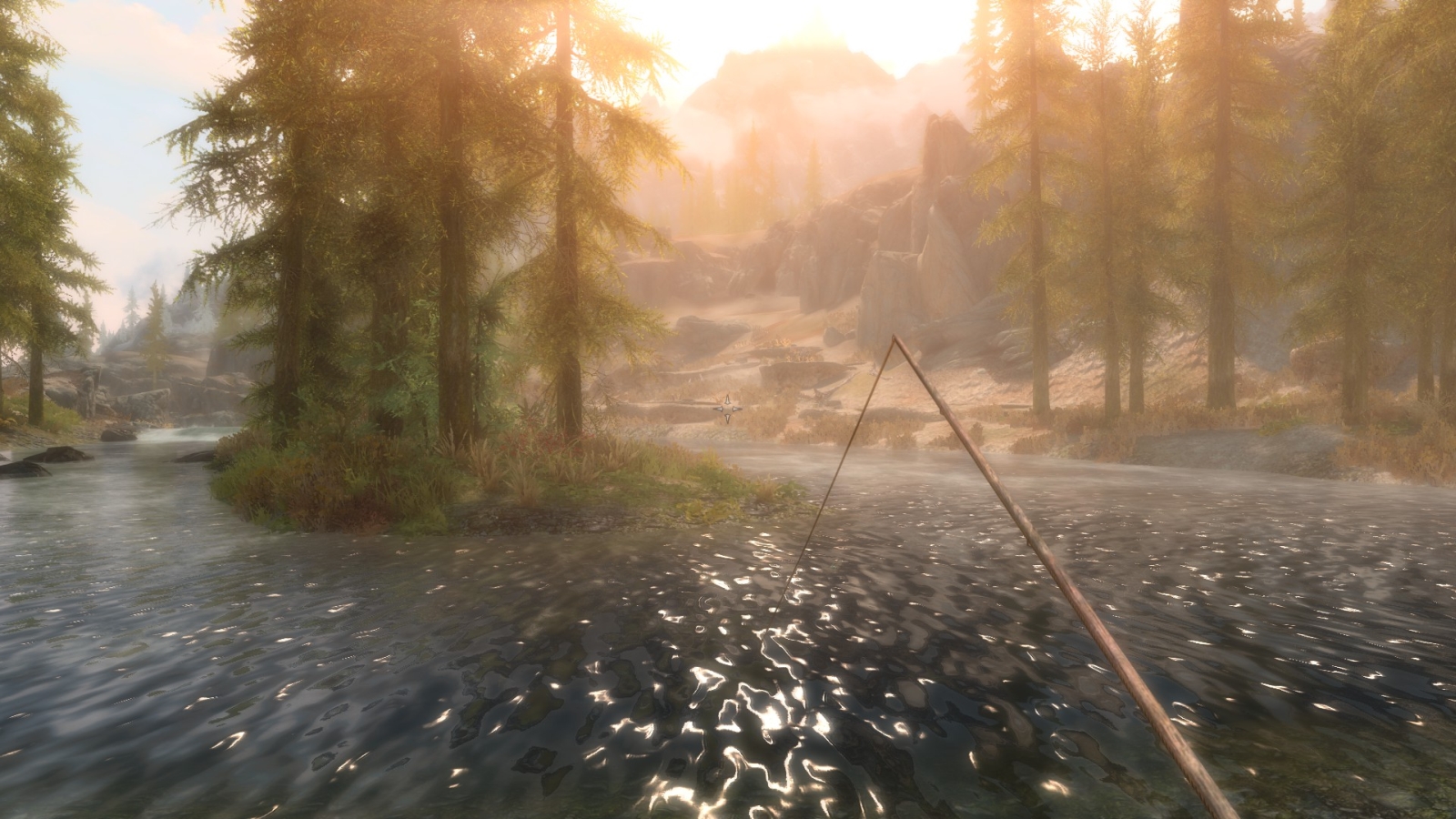 Other Creation Club items also range from somewhat neat to worthless, but overall it feels like a very low amount of effort went into these “premium” mods. The quests in particular reuse common lines and instead rely entirely on text to tell their stories, which is just sad when something like Faalskar exists, a fully voiced, DLC sized campaign in a new location which you can download for free. The rewards from these quests are the best parts, but even they feel lackluster unless you’re a big Elder Scrolls fan and want all the magic items from games past like the Gray Cowl of Nocturnal. I simply don’t feel much attachment to these items because they’re so easy to get. Kill a person who asked you to do so and you get a fancy player home, kill some random bandits and you get gold weapons and armor, the list goes on. The aforementioned quest for the cowl was the only interesting one, with the dinner party coming in close before it dropped the ball entirely. By that I mean the Dragonborn is invited to a murder mystery party, where the killer just stabbs someone right in front of everyone and you have to kill all the guests. That is, if you can even get in: the cave the quest takes place in is still blocked off by the ground on the mountainside and you have to use console commands to walk through them. I can deal with glitches or weirdness in an already packed game, but when it’s in DLC you have to pay extra for I take umbrage.

Skyrim: Anniversary Edition is full of lackluster additions to a fantastic game. Some new areas are blocked off, quests feel like busy work, and the new items aren’t all that useful. The best parts are already in a free update, so stick with that.

David is the kind of person to wear his heart on his sleeve. He can find positives in anything, like this is a person who loved Star Fox Zero to death. You’ll see him playing all kinds of games: AAAs, Indies, game jam games, games of all genres, and writing about them! Here. On this website. When not writing or playing games, you can find David making music, games, or enjoying a good book. David’s favorite games include NieR: Automata, Mother 3, and Gravity Rush.
Related Articles: The Elder Scrolls V: Skyrim Anniversary Edition
Share
Tweet
Share
Submit