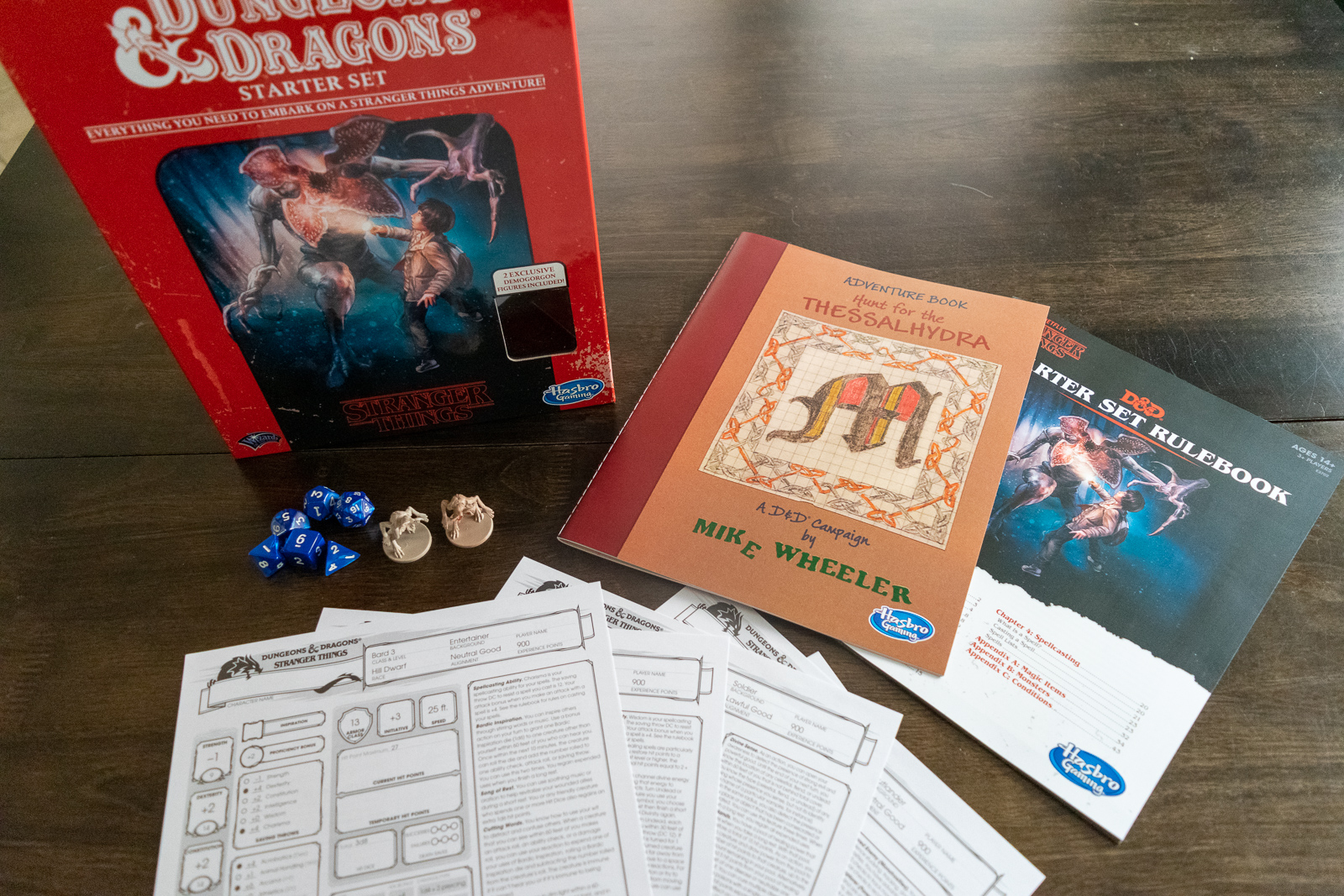 When I watched the first episode of Stranger Things back in 2016, it took all of two minutes to hook me in a way that no other show really had before: four boys sitting around a table playing Dungeon & Dragons in 1983, roughly the same age as I was that year, doing the same thing I was doing at that age. I, like many others that summer, binge-watched the entire season, but for me it was personal. Fifth Edition D&D was already on an upward trajectory by that point, but the prominent role the game played in the hit Netflix series was likely what propelled it into the mainstream. Now, Dungeons and Dragons is more popular than it ever has been, and as we get closer to the third season of Stranger Things, Hasbro and Wizards of the Coast bring it full circle with a Stranger Things themed starter set to whet our appetites and bring more new players into the fold. 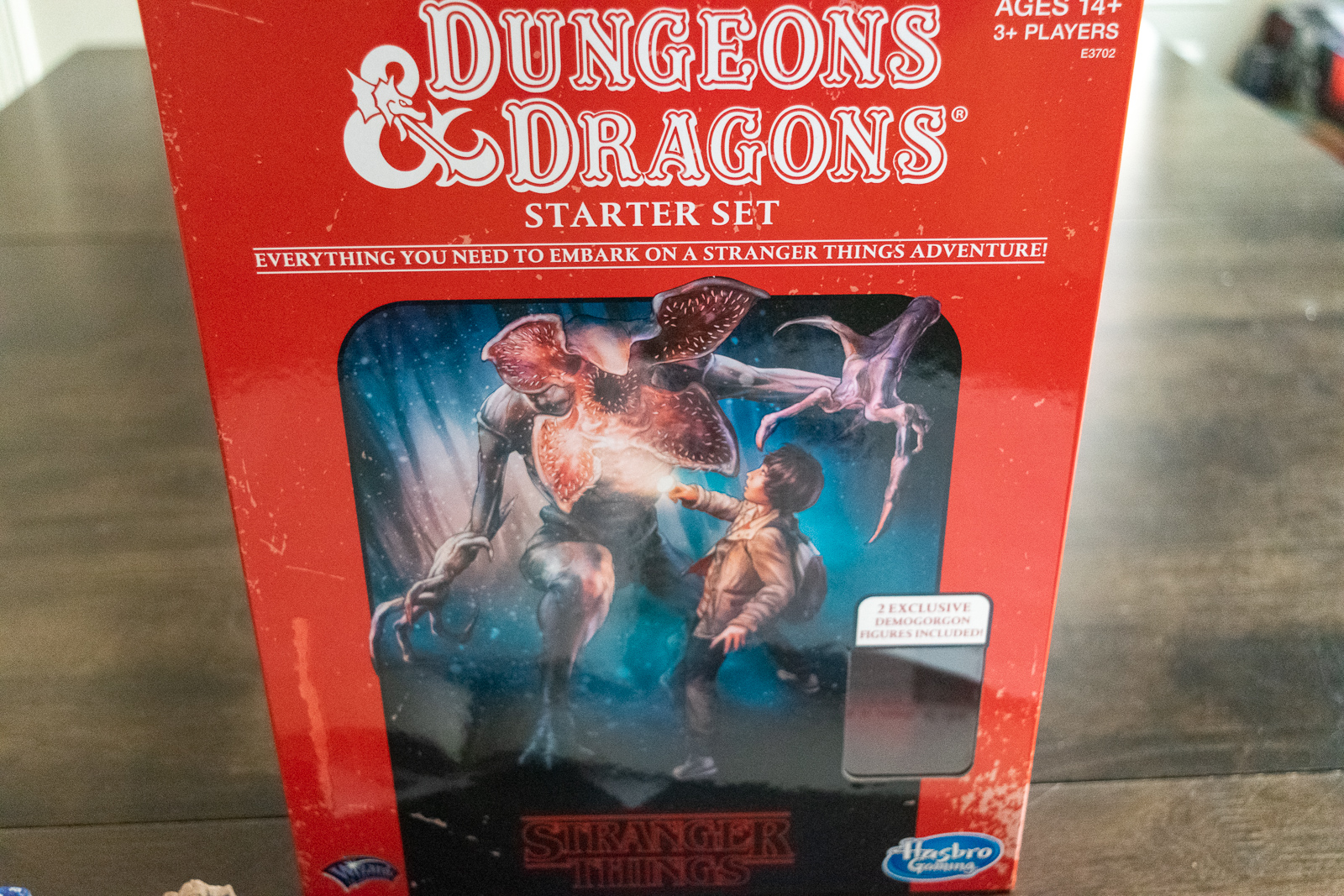 With a box design reminiscent of the classic Basic set from 1983 (naturally), The Stranger Things Starter Set includes a basic rulebook, a set of polyhedral dice, five pre-generated character sheets, two Demogorgon miniatures (styled after the show’s creatures), and the adventure ripped straight from the series, Hunt for the Thessalhydra. Luckily, the set of dice didn’t include or require a wax crayon to fill in the numbers like the original did, and in fact the overall production quality of the set is much higher than it was in the old days. Unfortunately, that quality did not extend to the two included miniatures; both are from an identical mold, with the head being a separate piece glued on, affording a bit of variability as one head was affixed at a slightly different angle from the other. Additionally, one is pre-painted while the other is not, but the plastic they are cast in is so cheap and rubbery that it makes Reaper Bones plastic look good in comparison. 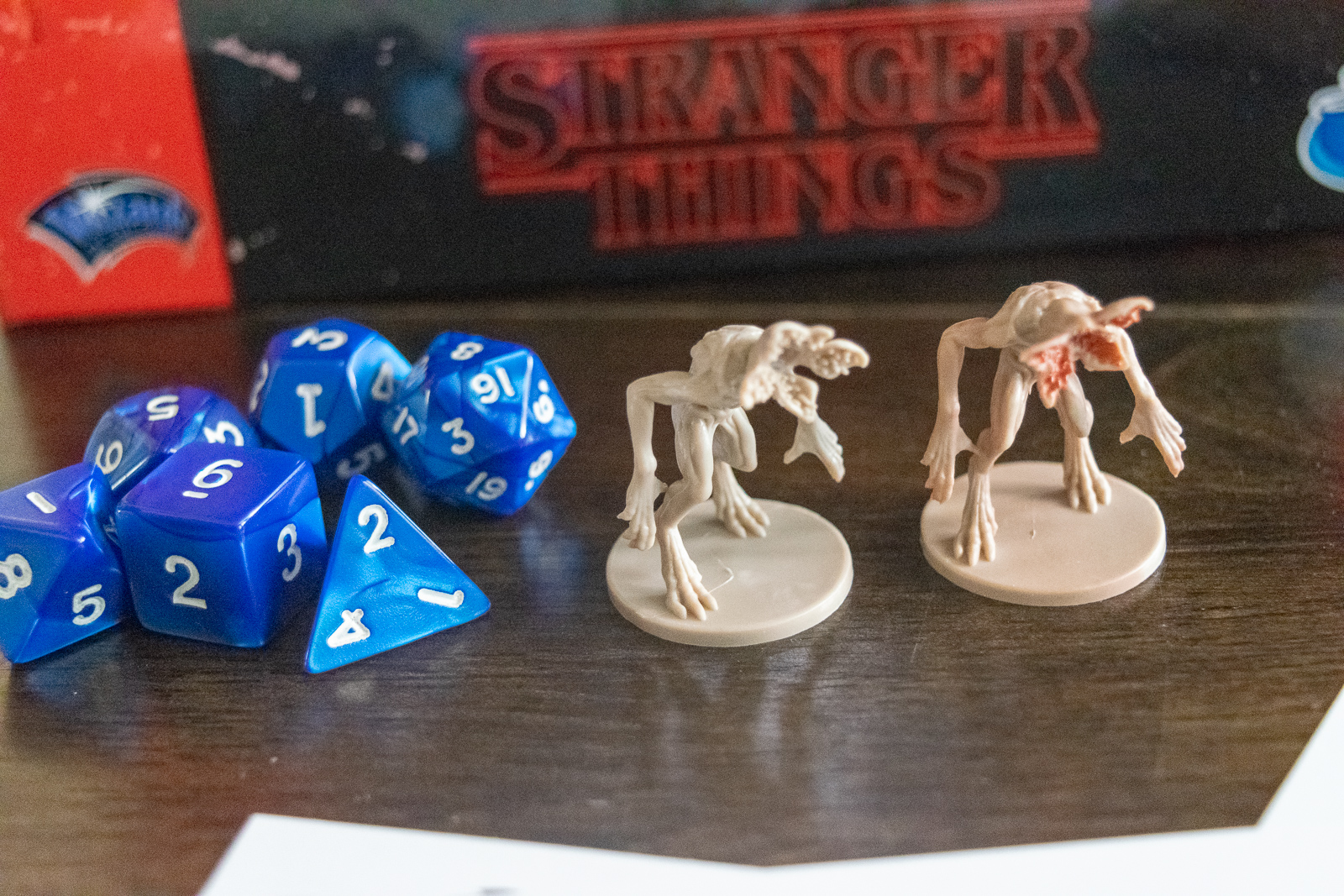 The included third-level characters are, naturally, representative of the five kids from Stranger Things, enabling players to take on the roles of Dustin’s bard, Mike’s paladin, Lucas’ ranger, Will’s cleric, and Eleven’s wizard (though in the show she never actually sat at the table with the boys). The adventure book is actually printed as if it were hand written and drawn by Mike himself, and the content adheres strongly to the scene from the first episode, complete with troglodytes. The adventure includes a handful of standard D&D encounter types: NPC encounters, dungeon crawling, puzzles and, of course, combat. There’s really only enough here for a single evening’s worth of play, and my one gripe is that once it ends, it doesn’t offer any guidance on how the DM can go on from there. This is in sharp contrast to the original Basic set’s included module, Keep on the Borderlands, or even the most recent set’s Lost Mines of Phandelver, which could keep a new DM and their party busy over multiple sessions, with multiple opportunities for leveling along the way (and starting from first level as well). 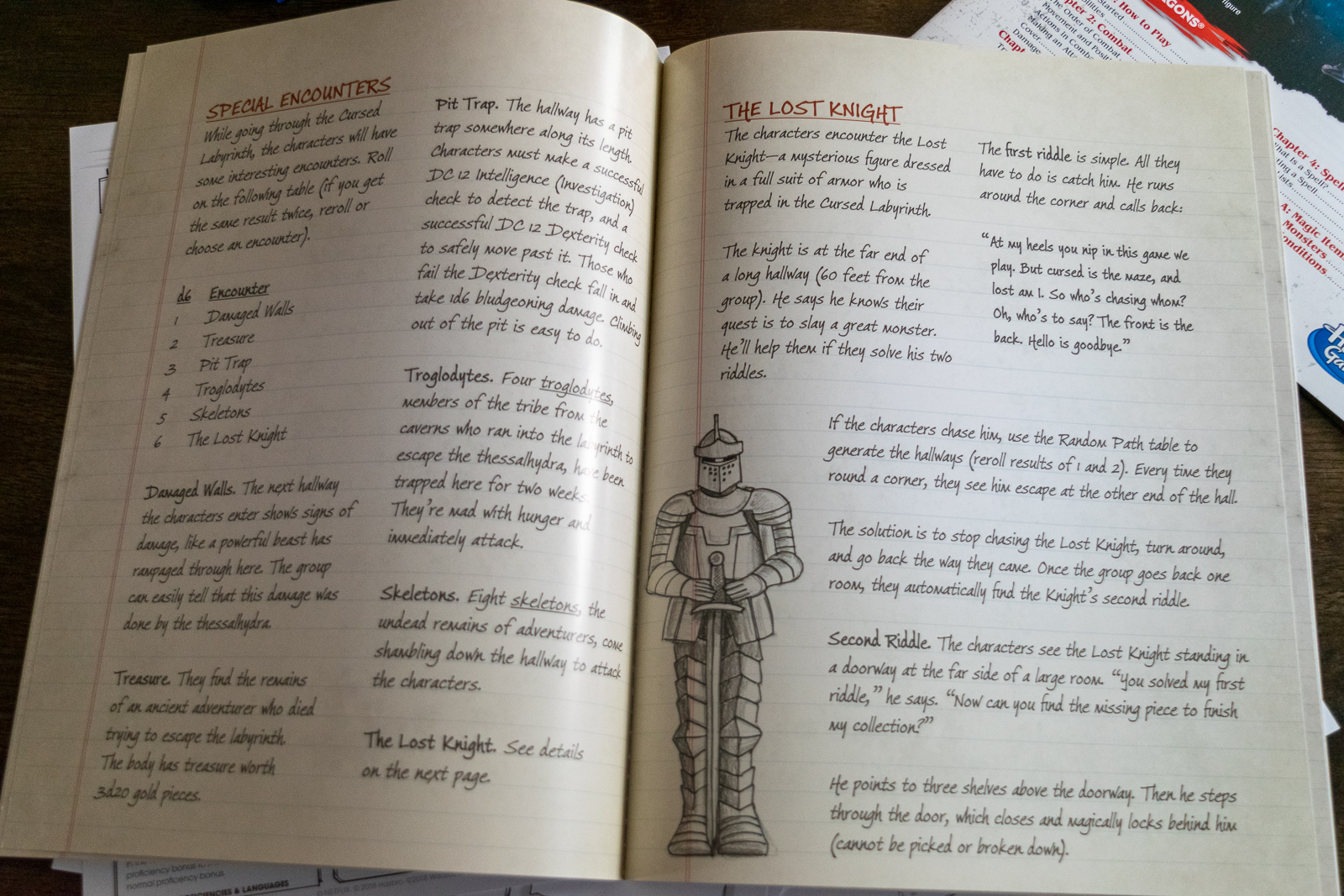 Luckily, the starter set rulebook is pretty well done and gets across the core concepts of playing the game succinctly and in a way that doesn’t feel overwhelming like handing a large hardcover volume to new player can. I’m not sure I agree with the choice to include just pre-generated characters, as one of the most fun things a new player can do is create their own character, and those rules are not included at all. 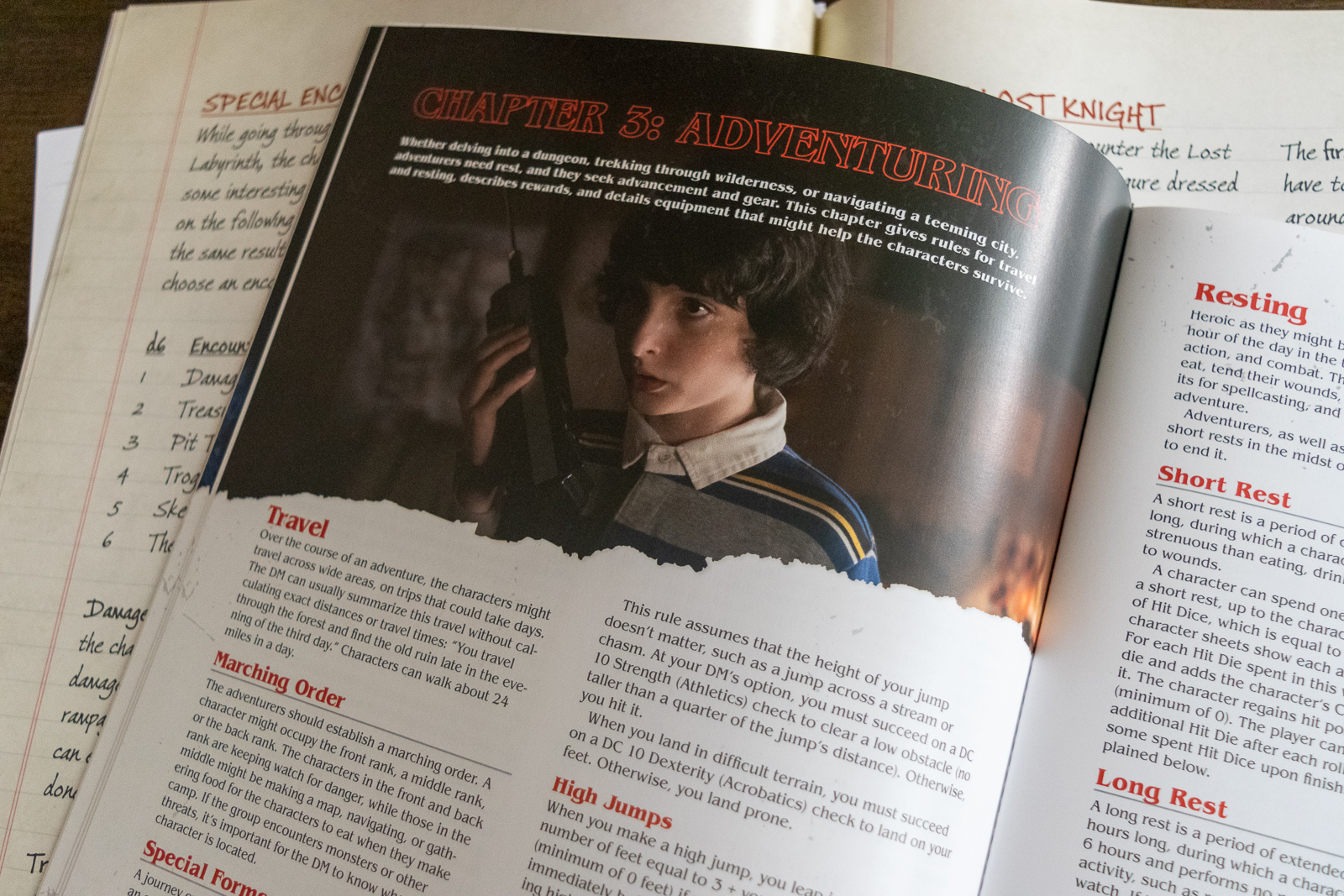 Unfortunately, all of the artwork and imagery included in the book is from the show, rather than from D&D, and I think that’s a bit of a problem considering that the handful of monsters in the creature section aren’t visually represented at all. There’s enough in that volume for an enterprising young Dungeon Master to start building on where Hunt for the Thessalhydra left off and craft their own addition to the tale for another session or two, but it won’t be long until they and the players hit a wall and will need to seek out more guidance to keep their game going. 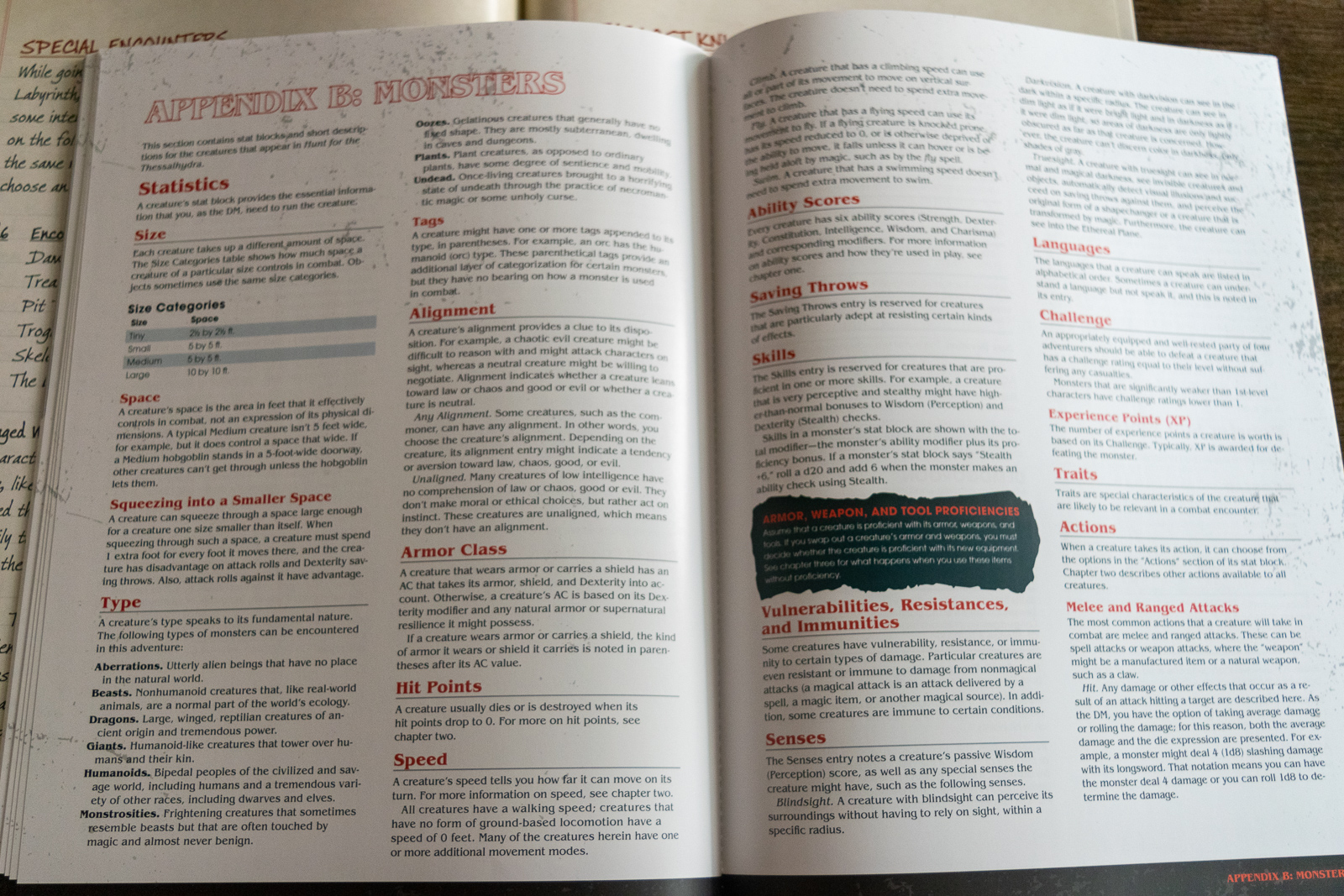 Ultimately, the Dungeons & Dragons Stranger Things Starter Set is a fairly well-crafted tease of a much larger experience, providing just enough content for new players to get their feet wet, but I question whether or not it’s enough to keep them playing afterwards. The set doesn’t really offer much to players already familiar with D&D, however, as the included adventure is short and light on lore, and the pair of demogorgon miniatures just aren’t that great.

Mike Dunn is the old man of Gaming Trend, having cut his teeth on Atari consoles and First Edition Advanced Dungeons & Dragons back in the day. His involvement with Gaming Trend dates back to 2003, and he’s done everything from design and code to writing and managing. Now he has come full circle, with a rekindled passion for tabletop gaming and a recent debut as Dungeon Master (nearly forty years after he purchased the original DMG).
Related Articles: Stranger Things Dungeons & Dragons Starter Set, Tabletop
Share
Tweet
Share
Submit