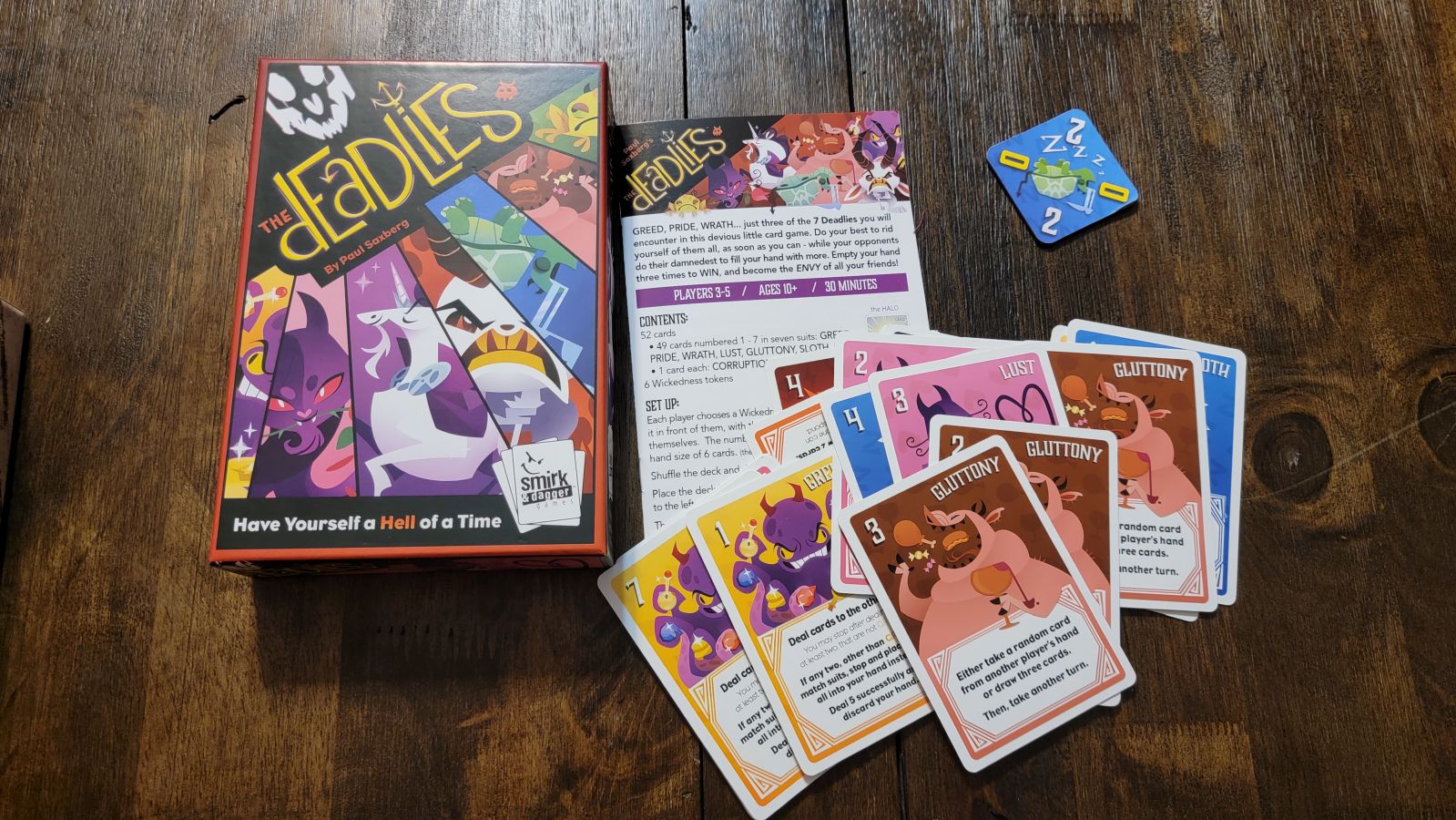 Greed, pride, wrath, lust, gluttony, sloth, and envy, better known as the seven deadly sins, is a concept that most are familiar with. Often these sins serve as a warning to keep individuals from becoming too selfish, with most tales focusing on an individual partaking in one of these sins and later suffering some sort of retribution for their self-centered ways. The same holds true for The Deadlies, a fast-paced card game in which you attempt to rid yourself of cards bearing the seven deadly sins, all while attempting to thwart your opponents and add more sins to their deck. It’s a game of risk and reward, with the player just as often harming themselves as those they are playing against.

Deceptively simple at first glance, The Deadlies reveals its strategic nature as the players become more comfortable with the rules and with the various punishments which they can inflict on other players, along with the potential cost to themselves for those same punishments. The contents of the box are simple, a 52-card deck with charmingly cute yet devious creatures on each card depicting one of the seven sins and with a number between 1 and 7, along with six wickedness tokens. 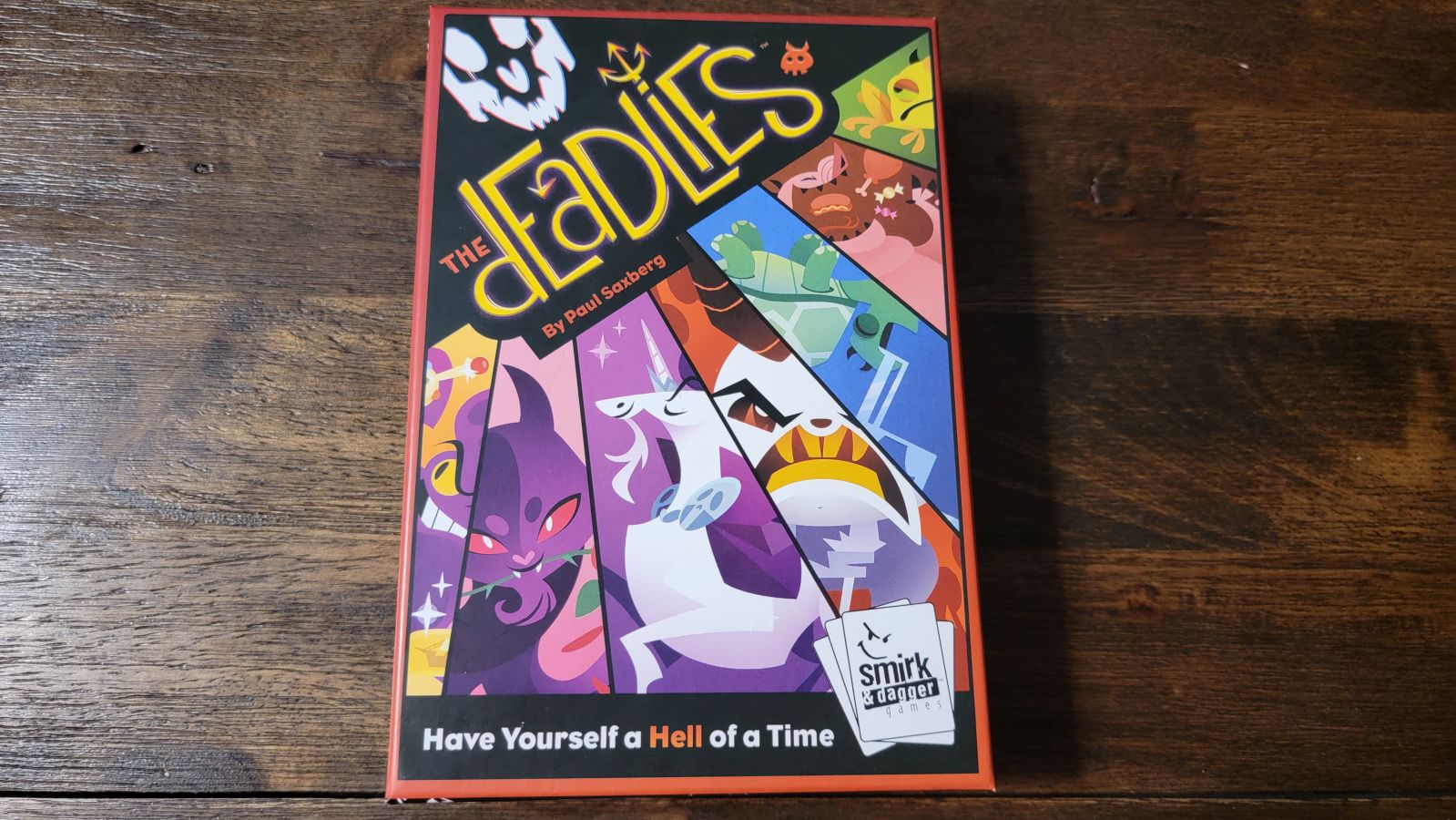 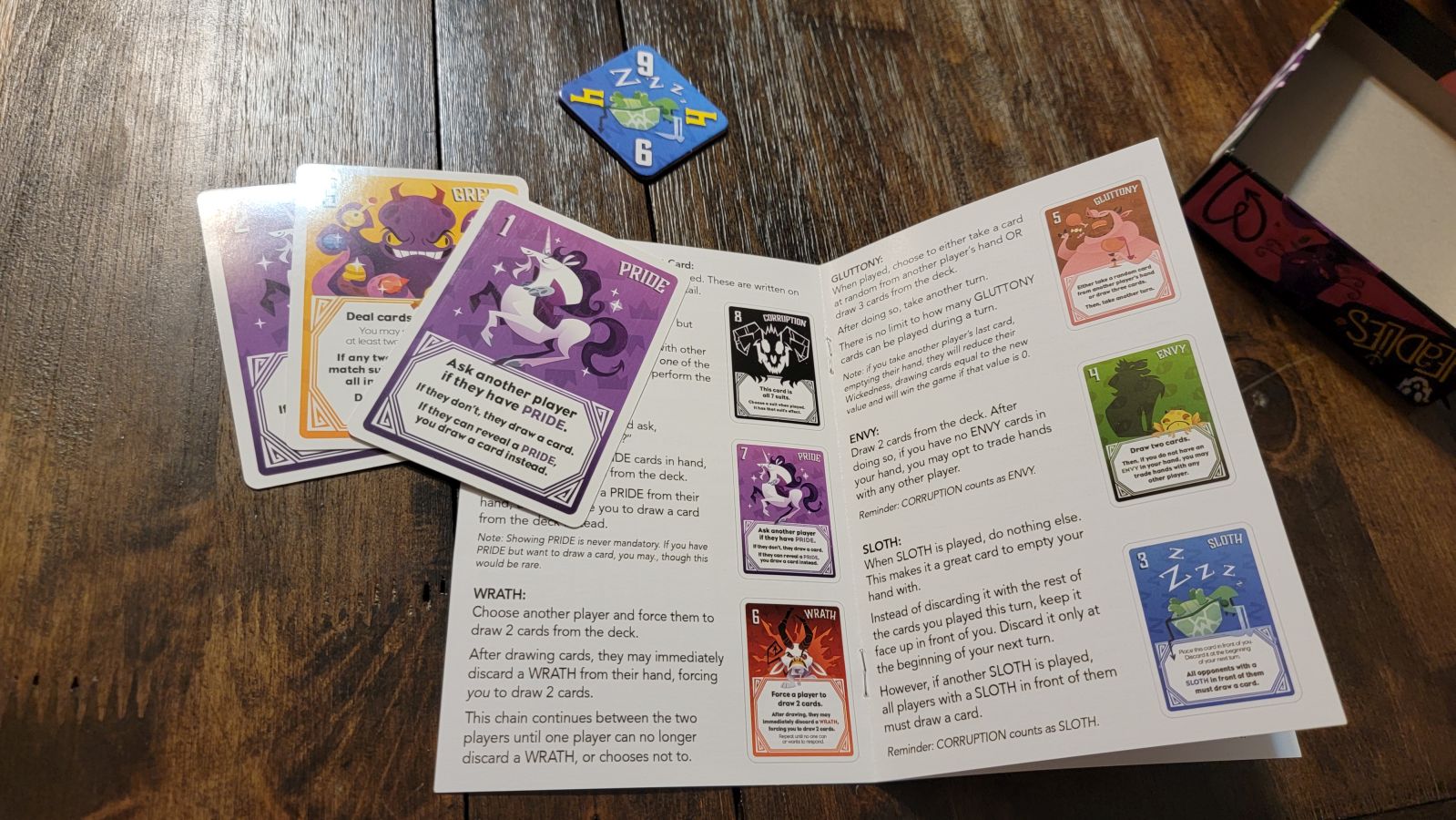 The Deadlies works best with 3 to 5 players, although there is a variation which allows for a  6th player, but doing so will shorten the game’s length. To set up, each player chooses a wickedness token and places it in front of them with the number six pointing toward them. When that wickedness token reaches zero, that player is declared the winner – but I’ll dive into how that occurs a bit later. Each player is then given six cards, with the rest of the deck being placed in the middle of all players. Players must leave room for a discard deck and for the Halo card, which is only used if a player ends up with a Purity card in their hand (more on that later).

The most angelic player begins the game – or, if you’re all a bit on the wicked side – the host of the party or owner of the game will begin. With each turn, a player will play one or more cards, resolve the effect of the topmost card they played, and discard the cards played to the discard pile. There are a few ways to play your cards: you can lay down any number of cards of the same suite and then resolve the action of that suite; lay down any number of cards with the same number value, after which you would choose which card to be the topmost card and to resolve that action; or you may lay out a straight of any length, after which you would resolve the action of the highest numbered card. 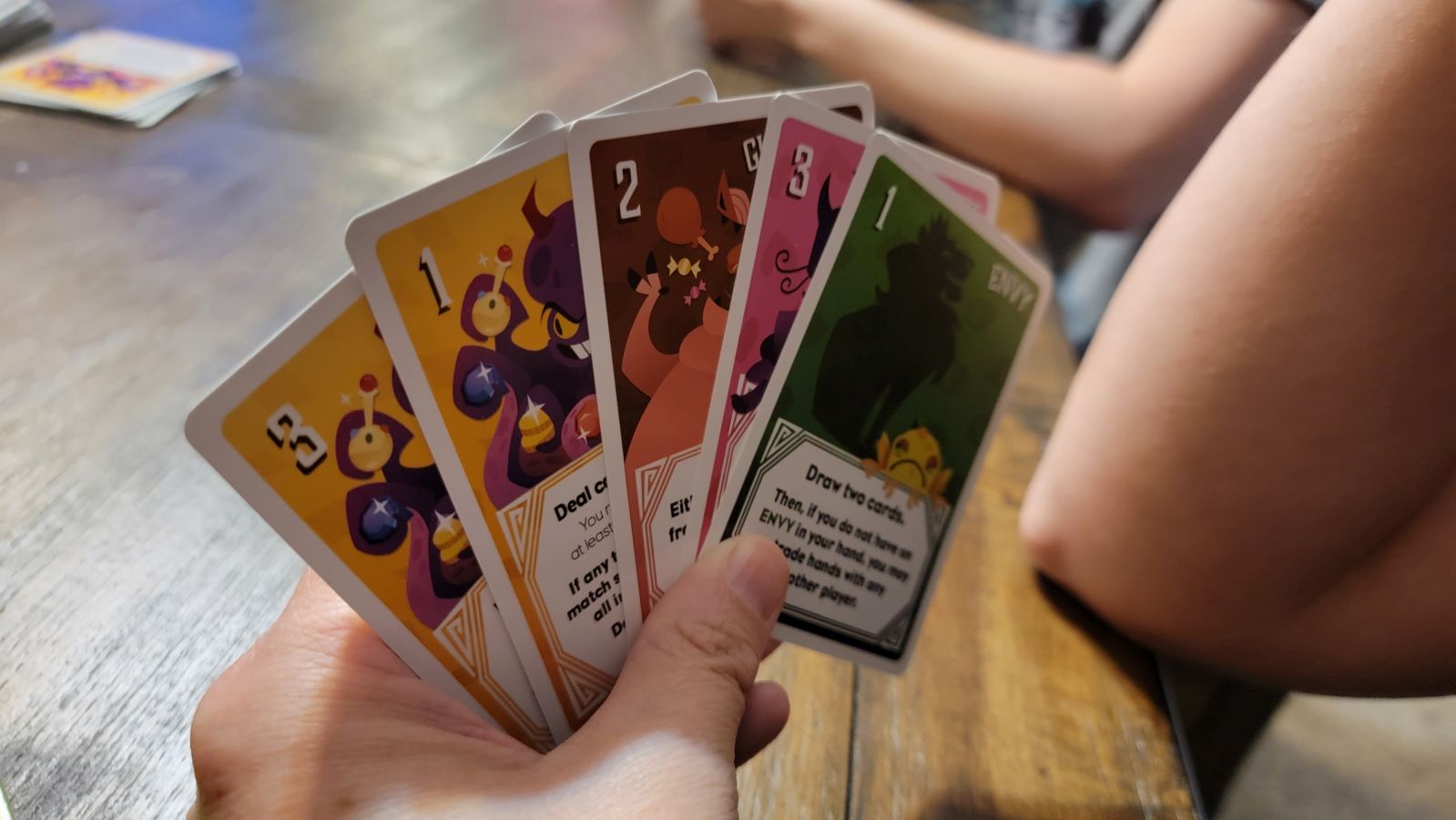 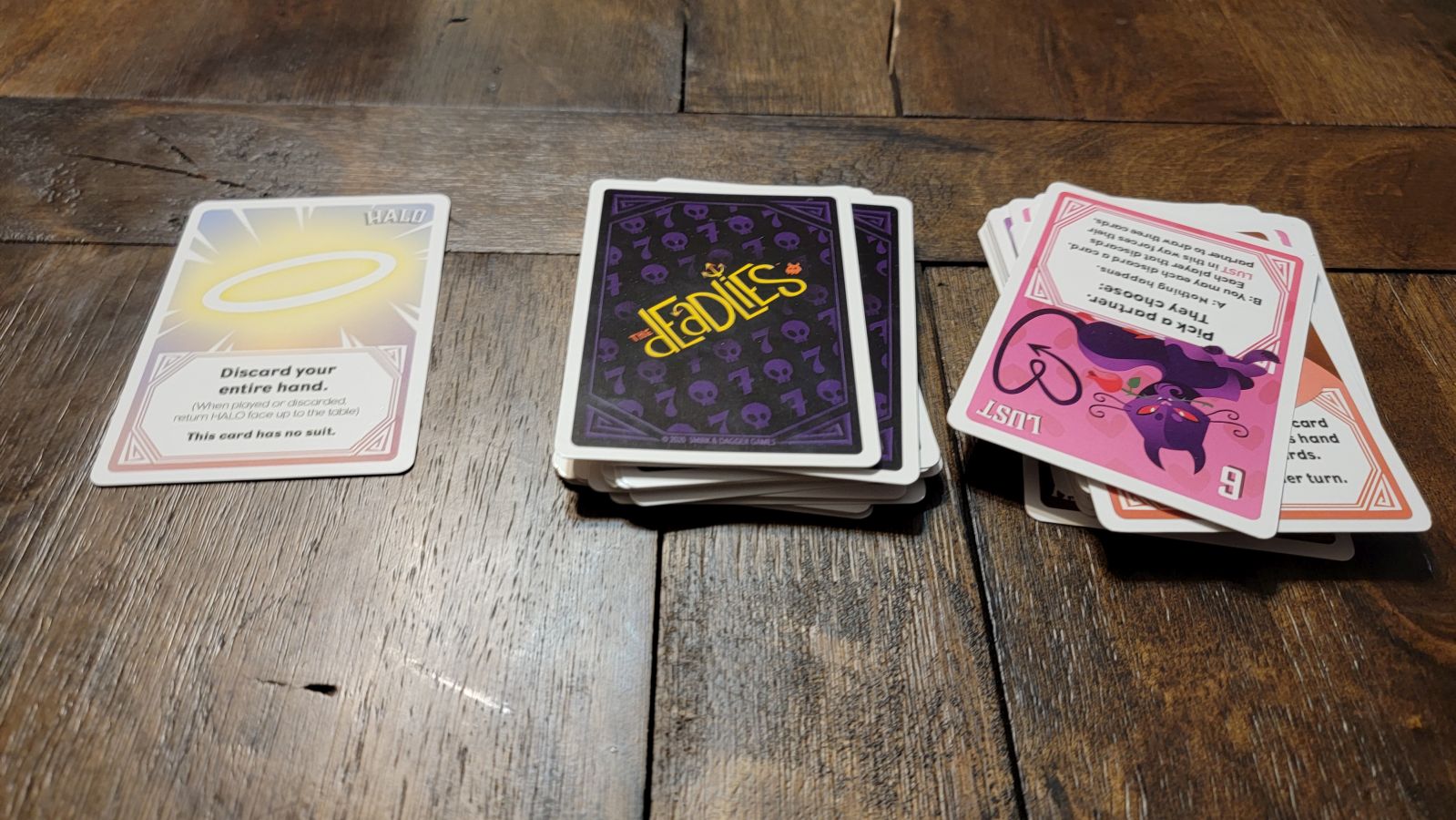 Each sin has an action you must perform to resolve it and end your turn. Pride allows you to choose a player and ask if they have any pride cards in their hand, if they do not, then they must draw an extra card from the deck, but if they do, then you must draw an extra card from the deck. Wrath allows you to choose another player and force them to draw two additional cards, but if they then have a wrath card in their hand, they can force you to draw two cards as well. This continues until neither player has a wrath card left in their hand. Gluttony allows a player to either take a card from any player’s hand or to draw three cards from the deck; they are then allowed to take an additional turn. If they have another gluttony card, they can continue this trend until there are no gluttony cards left in their hand. Envy allows you to draw two cards from the deck and after doing so if you have no Envy cards in your hand, then you may trade hands with any other player. Sloth allows you to, well, do nothing. By playing a sloth card you can get rid of cards while not having to take any specific actions, but you must leave your card in front of you until your next turn and if another player decides to use a sloth card, then you must draw a card from the deck. Greed has the player deal cards face up in front of other players in a clockwise motion. The player must deal at least two cards, but can deal up to five, with the catch being that they must not deal a greed card, otherwise all dealt cards will go into the player’s hand. After dealing two cards the player can choose to stop, forcing the players with the cards to add them to their deck. If the player deals out five cards without a greed, then they can empty their entire hand. Finally, there’s corruption, which is not a deadly sin but instead serves as a wild card and can be used as any of the seven suites.

As you can tell from the above explanations, each resolve action has the potential to provide both a positive and negative effect, and you’re never quite sure which you’ll receive, bringing some fun strategy into play. Are you going to risk playing five cards during greed to empty your hand? Are you going to try envy and steal a player’s hand that has less cards than you? Or are you going to take your chances with wrath, in hopes that you’ll add cards to your opponent’s deck rather than your own? 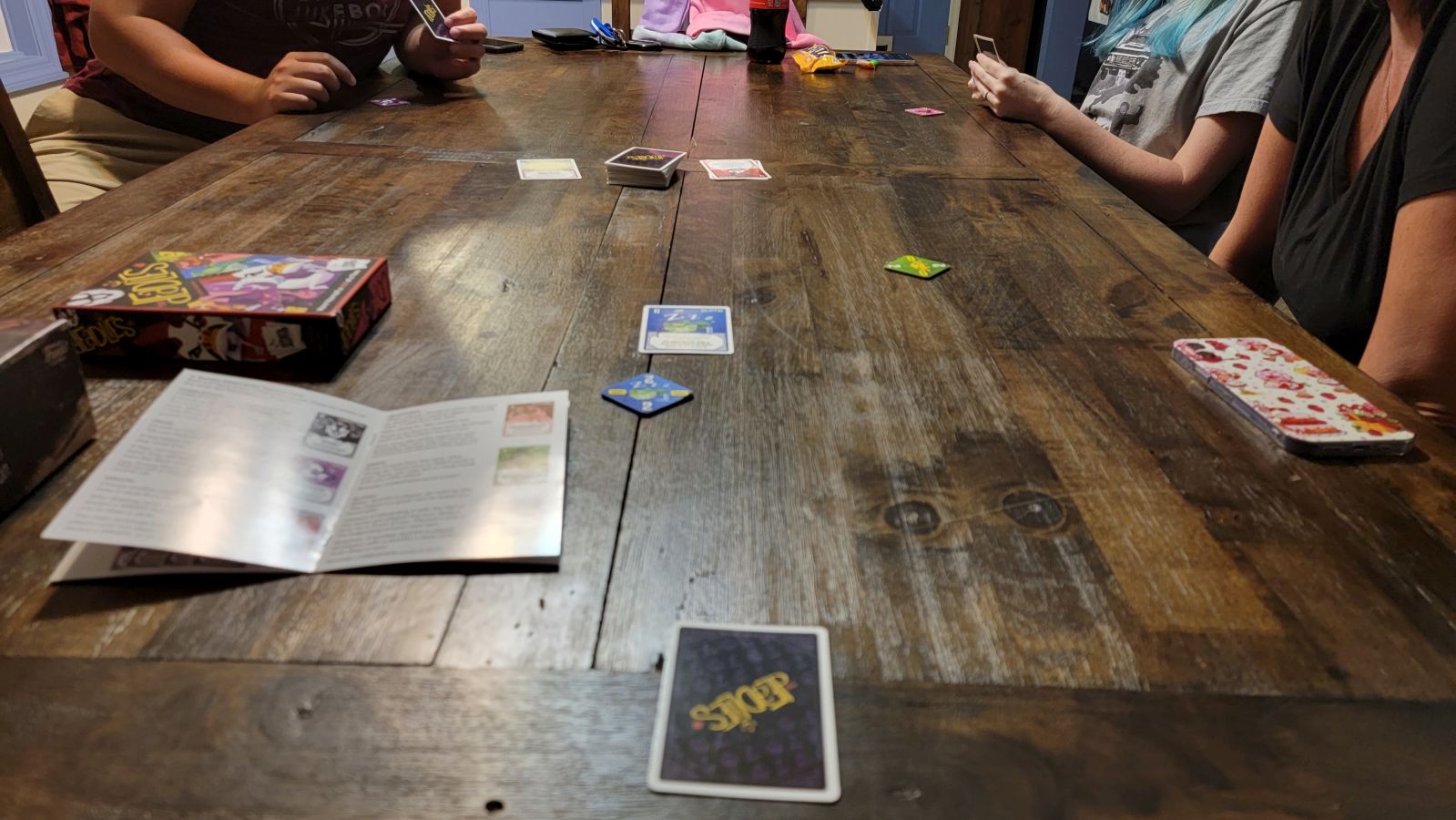 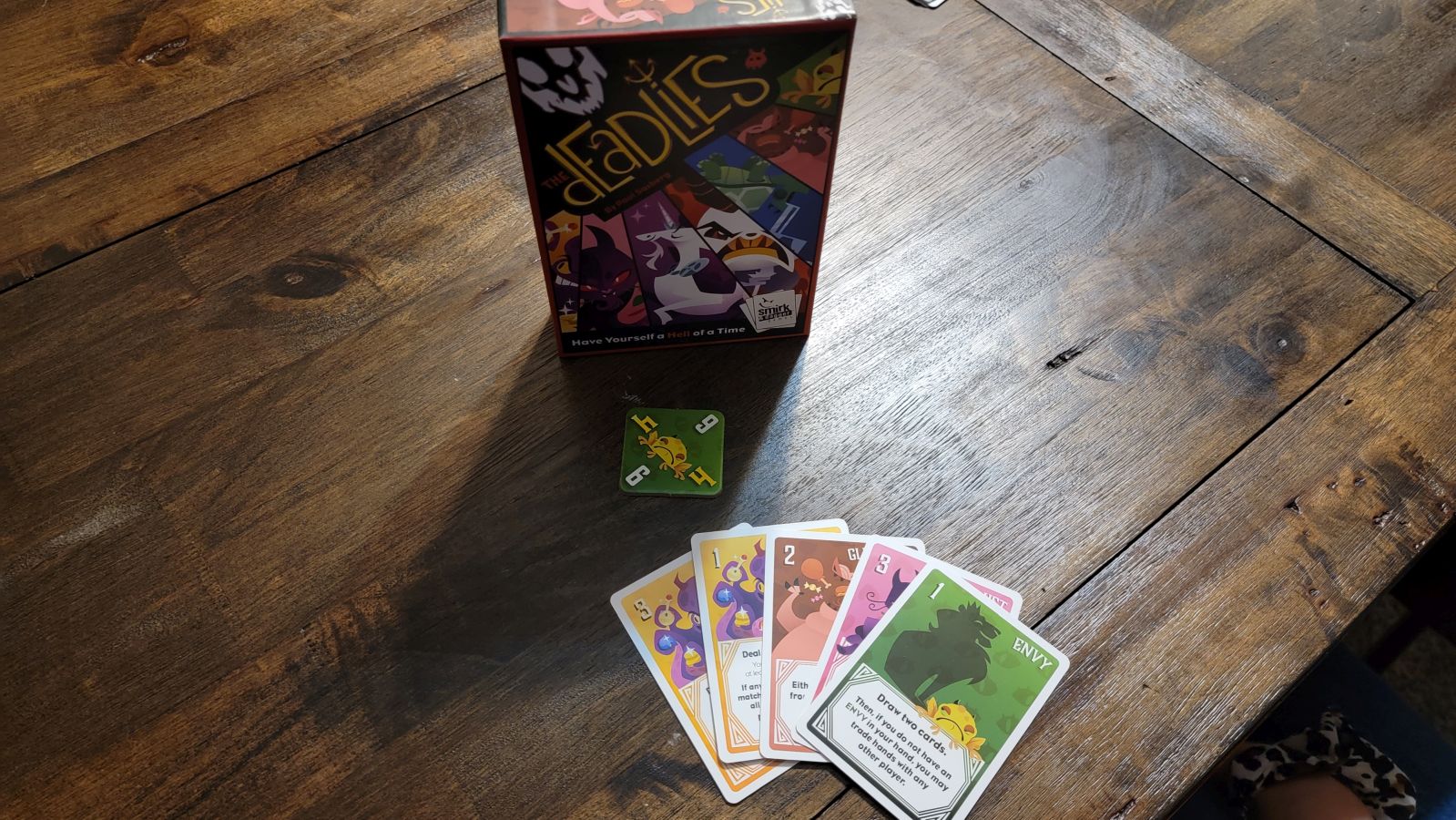 Along with the seven sins and corruption, there is a purity card and a halo card. The purity card, when drawn, allows the player to add the halo card to their deck. The halo card can be used at any time to empty a player’s entire hand and move down a notch on the wickedness token. This is technically the only play that does not have a drawback, though there is only one of each card so it is rare that a player will end up with it in their hand, so it never feels unfair to other players as everybody has the same chance of ending up with the card.

The Deadlies begins slow-paced as players learn the rules of each card, but after a few rounds the game speeds up tremendously and becomes a chaotic back and forth between players. A full game only takes around 30 minutes to complete and remains incredibly fun throughout and should be accessible for most ages, but the game suggests age 10 and up. My friend group had an absolute blast with The Deadlies; it was incredibly fulfilling to cause as many issues to each other as we could, while just as often making our own positions worse. Thankfully, this is not a game where losing a gamble is a cause for being upset, that risk just becomes an accepted part of the game and allows the times you do manage to screw over another player all the more enjoyable.

The Deadlies is a charming, fast-paced card game which makes unique use of the seven deadly sins to create a game full of risk and reward. It is a game that elicits friendly competition between those involved while being accessible to nearly all players due to a simple learning curve and easy to grasp rules. At only 30 or so minutes a game and consisting of simply 52 cards and 6 wickedness tokens, The Deadlies is perfect for parties and small get-togethers, as it can be easily picked up and played with little space, time, or preparation needed.

Richard Allen is a freelance writer and contributing editor for various publications. When not writing for Gaming Trend you can find him covering theatre for Broadway World, movies and TV for Fandomize, or working on original stories. An avid retro gamer, he is overly obsessed with Dragon's Lair. Chat with him via @thricetheartist on Twitter and @richardallenwrites on Facebook and Instagram.
Related Articles: The Deadlies
Share
Tweet
Share
Submit