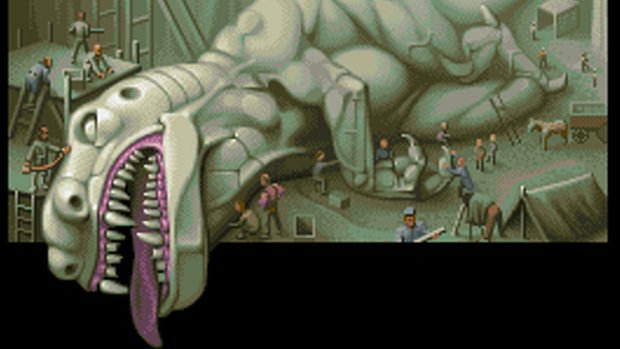 Back in 1993, a company by the name of Bitmap Brothers released a top-down adventure title entitled The Chaos Engine. While that game didn’t pick up a significant fan base, its weird dystopian setting and diverse gameplay led to it becoming a cult hit. Though originally released for the Amiga (and ported to the SNES and others), The Chaos Engine has now arrived on our PCs as Mastertronic Group and Abstraction Games both decided it was time to make the old new yet again.

[singlepic id=15803 w=320 h=240 float=left]In typical old-school style, there’s very little setup before you’re into the game and shooting baddies. You’re presented with a futuristic world that has been ravaged by The Chaos Engine, a machine that you and a partner must team up to take down. To take the machine down, you choose one of six mercenaries and begin your quest. The premise is interesting, making you want to learn more as you trudge through the game. Unfortunately, the story never develops past that original premise. This issue led me into enjoying reading about the crazy story more than actually playing the game.

There aren’t a lot of changes made to this re-boot but one was the option for either an “Enhanced mode” or a “Classic mode” experience. This is a feature that I could not properly explore due to either user idiocy or poor design. Once the game launched, I immediately went into the menu bar’s options section to turn the game into full screen mode. Upon doing that, I lost the menu bar and couldn’t mess with any of the options for the rest of the game. Normally, this issue would be corrected by having an options menu in-game, but that does not exist in The Chaos Engine. Due to turning the game full screen, I couldn’t alter controls, change video settings, or, of course, take it out of full screen. Whether this is due to me drastically overlooking something is to be determined, but I tried everything to find the options yet again and they never appeared.

When it comes to the actual game, The Chaos Engine plays exactly as you’d remember. It’s a simple top-down shooter that requires you to get keys and other items to unlock future areas. There are special abilities as well that do come in handy when they’re needed.  These special abilities are simple attacks which range from shooting out a circle of bullets at all enemies, or simply popping up a map showing you where the level’s exit is located. Unfortunately, what those special abilities do is unexplained and can only be found out through experimentation.

Sadly, the poor controls hamper any kind of experimentation. As most top-down shooters were[singlepic id=15804 w=320 h=240 float=right] at that time, it’s a 16-direction shooter meaning that you have set paths you must shoot in. Getting enemies in your line of fire can become incredibly frustrating and also helps prove why this is an ancient development philosophy. For some older games, this version of combat holds up slightly due to solid movement controls, but not The Chaos Engine. When you’re navigating around the environment, you feel as if your character is carrying about 300 pounds of bricks. The movement and turning feels stilted and only makes the aiming limitations worse.

Just from looking at screenshots, it’s fairly clear that The Chaos Engine is a game from the early 90s. That isn’t to say that it’s a complete mess, because there’s definitely some appeal in old-school looks. The Chaos Engine hits a few of those nostalgic buttons, but overall it feels sort of bland, and lacking any variety to help it pop out. Throughout the four worlds, visual variety is never a thing that catches your eye. One thing that does impress are the nicely designed steam-punk character models. They’re all properly futuristic and equally demented in some sort of horrifying way.

UI is something people in the 90s didn’t necessarily have at the forefront of their development process. That’s where you would hope Abstraction Games would come into play and help out the aged product, something they did not do enough. One of the biggest issues came in the form of just how easy it is to either exit the game or restart the whole story. This issue is derived due to a lack of an “Are you sure?” prompt before you make big decisions. Restarting the whole game can be slightly rectified with the use of the passwords the game hands out, but it still kills accessibility, something you want to have if your plans are to bring new people on board the “Chaos Engine” train.

[singlepic id=15805 w=320 h=240 float=left]The Chaos Engine has always been a co-op focused game, and with this new-fangled technology, it’s nice to see online co-op being implemented into the product. Co-op is a lot of fun — if you can find somebody to play it with. If you’ve got some friends who are interested in The Chaos Engine you’ll never have a problem, but the lone wolves out there will find a barren wasteland.

Sometimes the past should stay in the past

My love for The Chaos Engine has never been immense, nor have I ever hated the game. With that equal conscience, I had no clue what to expect going into this remastered version. What I got was a dated and clunky top-down shooter that doesn’t play nearly as well as many remember. One huge plus is the blistering and exciting Richard Joseph soundtrack that the game still features. The soundtrack will stick in your head for days due to its combination of hypnotic pulses and electric energy. Unfortunately, Richard Joseph can’t save The Chaos Engine from falling deep into mediocrity. It’s a bummer, but that’s what happens to most video games as they age: they’re never as good as we once remembered.