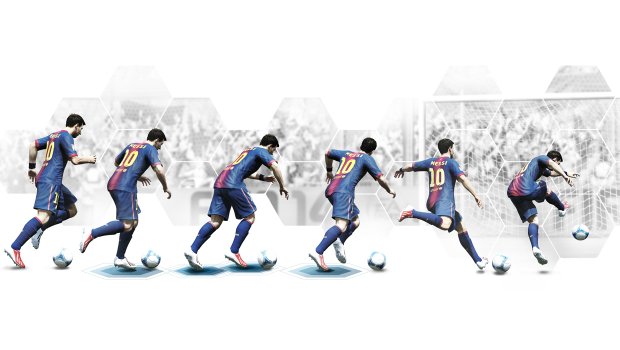 EA’s FIFA franchise has a unique task when it comes to the creation of their games, one that doesn’t heavily apply to other sports titles. With the whole world waiting in anticipation to play your product, it is pertinent to have a soccer game that captures the thrill of the sport, the national pride of its players, and the depth of passion that those players and their fans take to every single soccer match around the world. Short of placing gamers in the seats of Camp Nou with scarves in hand, FIFA 14 provides its dedicated fan base with the most intensely authentic sports experience on the market. Once again, FIFA reigns high over the sports gaming world, and is a must-own title for even the most rudimentary of soccer fans.

[singlepic id=16323 w=320 h=240 float=left]FIFA’s strong point has always been the control of players in-game. This title takes it to the next level with the new precision shot. Each step, pivot, turn, plant, and pass is fluid and dynamic, depending on player timing and positioning before making moves. No more will the ball simply suction to your player as you move through the pitch. One wrong move can send the ball careening away from the player into the hands of the defense, but a series of correct moves can lead to some creative and downright artful displays of offense. Dribbling and skill moves no longer need a button-press to become active, and now uniformly work within the movement of the player himself.

In addition to the updated physics of the players, Real Ball Physics takes the nuanced movements of the ball in play and delivers a new level of challenge. Many matches are won and lost by the way the ball bounces for one team over another, and now that is just as true on the digital pitch as it always has been on the real one. Particularly impressive is the way foot placement and player agility combine with the new ball physics to provide infinite scenarios for success or failure with striking. Never again will you simply run down the pitch and strike with full power and get a goal. The real-world physics simply won’t allow such nonsense.

[singlepic id=16324 w=320 h=240 float=right]Gamers looking for a light experience can play an exhibition match against a computer or online opponent. Those looking for a more intensive experience can enjoy Career Mode. Playing as either a single member of the team of the manager of a squad, your job is to perform your duties and help take your team (and your own status) up the ladder to greatness. While playing as a manager, you’ll control an entire squad, both in-game and outside of matches.

As a player, your duties mainly exist in the games themselves, and after a long and storied career, you can choose to take your created player and move him up to the manager position. In the Career Mode, you’ll be playing as a single member of the team (though you can choose to control to entire squad) and that fact has left some players frustrated with the AI of their teammates. In FIFA 14, updated Teammate Intelligence does a great job of eliminating that drag, giving your single player a whole squad of capable passers, scorers, and defenders. Teammate and opponent AI is crisp and situationally suited, and is keenly indicative of a player’s actual overall ratings.

[singlepic id=16325 w=320 h=240 float=left]FIFA 14 also boasts the most deep and interesting Ultimate Team mode of all of EA’s sports titles. Unlike in other iterations that focus on player overall ratings only, FIFA 14’s new Ultimate Team introduces Chemistry Styles, which is a simple idea that pays huge dividends with your Ultimate Team squad. The chemistry of players in positions connected through your team’s scheme rises based on team, league, or nationality. For instance, if your Ultimate Team defenders are all from Spain, play for Real Madrid, and play in the same league, they will enjoy the benefit of chemistry bonuses that affect their in-game play. In contrast, if those four defenders are from four seperate countries, nations, and leagues, they will have little in common and will not gain a bonus while playing with one another. There is a nice added strategy in collecting certain players from certain leagues or nations to complete a higher chemistry. Just like every other Ultimate Team game mode, it’ll take some money to really have a competitive experience.

[singlepic id=16326 w=320 h=240 float=right]A number of online playing modes are provided, and each is different in style. Seasons Mode pits players against other players, each match counting towards a season of play that determines champions, with teams moving up or down in global echelons that place winners with winners and beginners with other beginners. Players can play Seasons Mode singularly or with a friend in two-on-two settings. Also available within Seasons Mode is the Match Day mode that allows play of real-world matches as they happen day to day. Perhaps the most insane and ambitious mode is the full team online play Pro Clubs, where up to eleven people must work together to perform and win the match. These two modes and the World Cup mode (the same as Seasons but World Cup-oriented) all work similarly, and it may be wise to simply choose one of the three to participate in to fully enjoy what it has to offer.

The game looks great, with sleek and easily navigable menus and well thought-out designs for each menu and submenu. The soundtrack is a little underwhelming, but with tracks from Vampire Weekend and Bloc Party there can be little to gripe about. The player models look fantastic and the player-created models in FIFA 14 continue to be the best in the sports game genre. Lastly, over thirty leagues and six hundred clubs are available for play, providing the depth of coverage for each region’s set of teams. Very little is not to be enjoyed about this game.

[singlepic id=16327 w=320 h=240 float=left]The only problem that I encountered was a major one, however. The important Practice Arena just would not work for me under any circumstance. Usually the home screen for past FIFA’s, this year’s Practice Arena was tucked away in a submenu in the Game Modes screen. I attempted numerous times to load it up and practice my striking, but every time it would just go to a black screen and never load. The game wasn’t freezing, as I could still control the music and open the PlayStation 3 menus, but it wasn’t loading either. This happened with multiple attempts and was given ample time to load. While I can’t say with certainly that this is a widespread problem, it is one that some gamers will find very, very annoying. The Practice Arena certainly isn’t needed to fully enjoy this game, but it helps for inexperienced or rusty players like myself, and not being able to access it has been a drawback on an otherwise perfect game.

That’s really the bottom line here, folks. If the game had not been shipped with a broken Practice Arena (and for all I know, it is just my copy) it would be pristine. It’s so close to real that it often becomes frustratingly hard to play, but every sports game fanatic knows that it’s better to be frustrated by realism than by game glitches and broken animations. There is very little to not like about this game. FIFA 14 is a beautiful send-off to the waning current generation of gaming, and a perfect example of what has become the most authentic and entertaining sports game around.