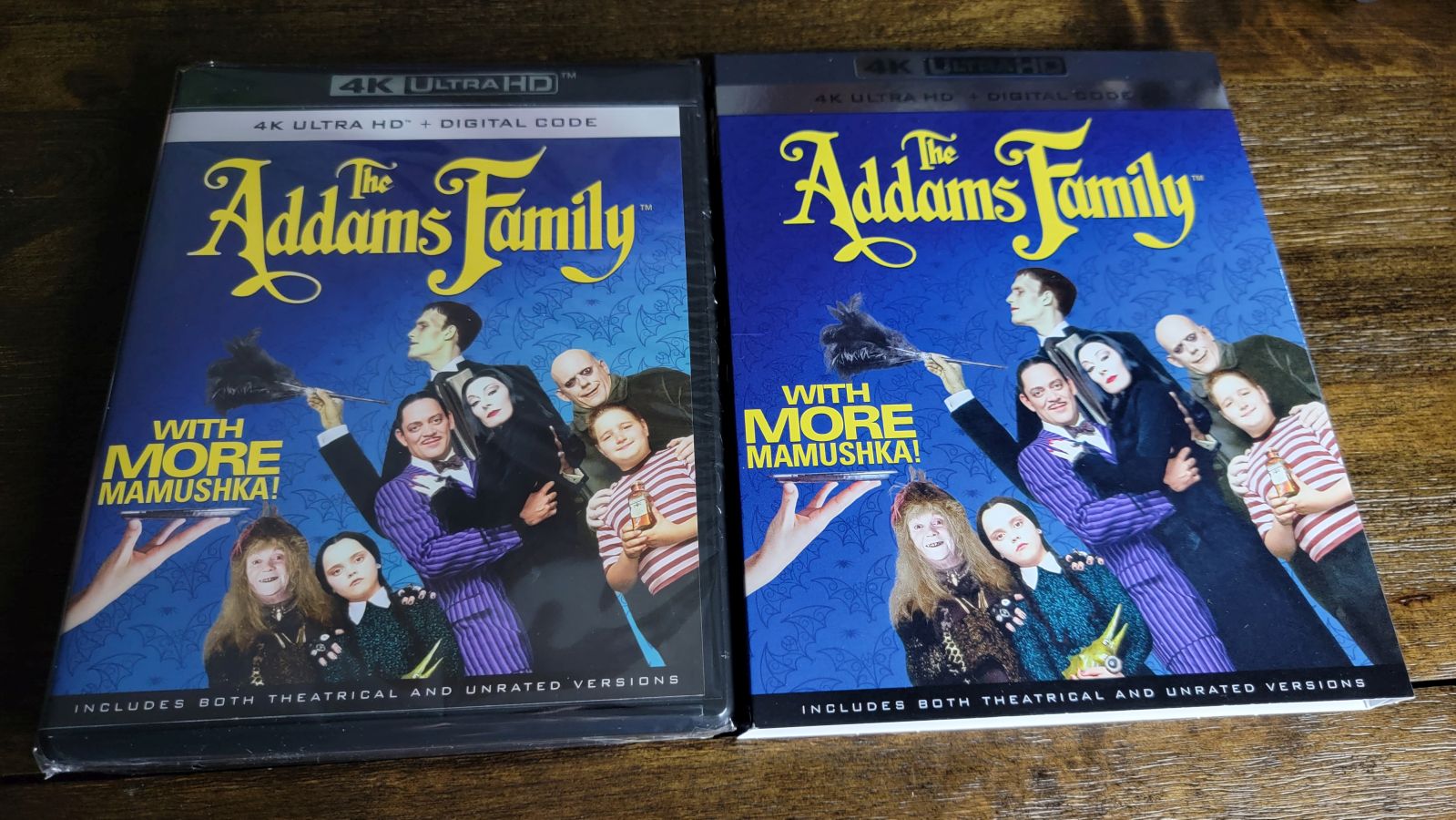 The Addams Family film was first released thirty years ago on November 22, 1991. Widely regarded as a classic, the film spawned a sequel and has inspired countless odes to the twisted yet incredibly sweet romance between Gomez and Morticia Addams. The Addams Family’s strength lies in its general lightheartedness despite its sometimes morbid subjects, showcasing that a family that is weird together, stays together.

To celebrate its 30th anniversary, Paramount Home Entertainment is releasing the film on 4K Ultra HD Blu-Ray and Digital 4K Ultra HD for the first time in an edition featuring both the Theatrical Version and Extended Cut, with an option to watch a short message from Director Barry Sonnenfeld before beginning the Extended Cut. Additionally, there is new content in the form of Filmmaker Focus: Barry Sonnenfeld on The Addams Family, alongside an archival featurette. The 4K Ultra HD Blu-Ray will be released on November 23rd, 2021 – just in time for the 30th anniversary – while the Digital 4K Ultra HD version was released on October 19th, 2021.

I won’t bother with an in-depth review of the film itself as it is thirty years old – odds are most people have already seen it and formed their own opinion on the film long ago. That said, it still holds up relatively well today with its tight focus on family. It’s rather endearing that a family of miscreants is one of the most stable, accepting, and loving families in film history. The Addams Family is unabashedly weird, and all the better for it. The deadpan nature of the characters and their complete and utter devotion to their lifestyle, without a bit of worry about how others perceive them, is what makes the film work. Background gags abound, and the leads give great performances. While the CGI in the finale is a bit old-fashioned, the work done to bring Thing to life without the use of CGI is still rather remarkable. The sets, cast, and direction all flow together to create a movie that rightfully entered the pantheon of film classics.

The Theatrical Cut comes in at 99 minutes long, while the Extended Version – which features the entire Mamushka dance for the first time ever according to Director Barry Sonnefeld – clocks in at 101 minutes. The Theatrical Version is rated PG-13 while the Extended Edition is Unrated, although I saw little in the extra minutes that would warrant a rating other than PG-13. The 4K Ultra High-Definition Blu-Ray features English 5.1 DTS-HD Master Audio, with English and French subtitles and Dolby audio. For proper audio and visual presentation, you will need a 4K Ultra HD TV with HDR support, an Ultra HD Blu-Ray Player, and a category 2 high-speed HDMI cable. A digital code is included which grants a download of the Digital 4K Ultra HD version of the film.

For a thirty-year-old film, the visual quality is astounding, especially considering all the shadows used to bring the family’s iconic mansion and property to life. While it isn’t on par with modern films, you wouldn’t expect that anyway due to the age. The dark tones are rich and the intentional use of lighting in the movie shines in 4K. Likewise, the image is sharp and defined, with very few scenes looking their age. The sharp contrast of the blood during the school play compared to the relatively dull tones of the film is a particular moment of note, as it is one of the few instances where brighter colors are allowed to stand out. Unfortunately, this extra detail also hurts a few of the scenes with Thing, particularly his city road scene, as it helps identify the use of green screen. This HD remaster also helps to point out the lackluster CGI during the finale, as it is one of the only moments that look dated. As The Addams Family goes, this is the best looking version we will most likely ever get. 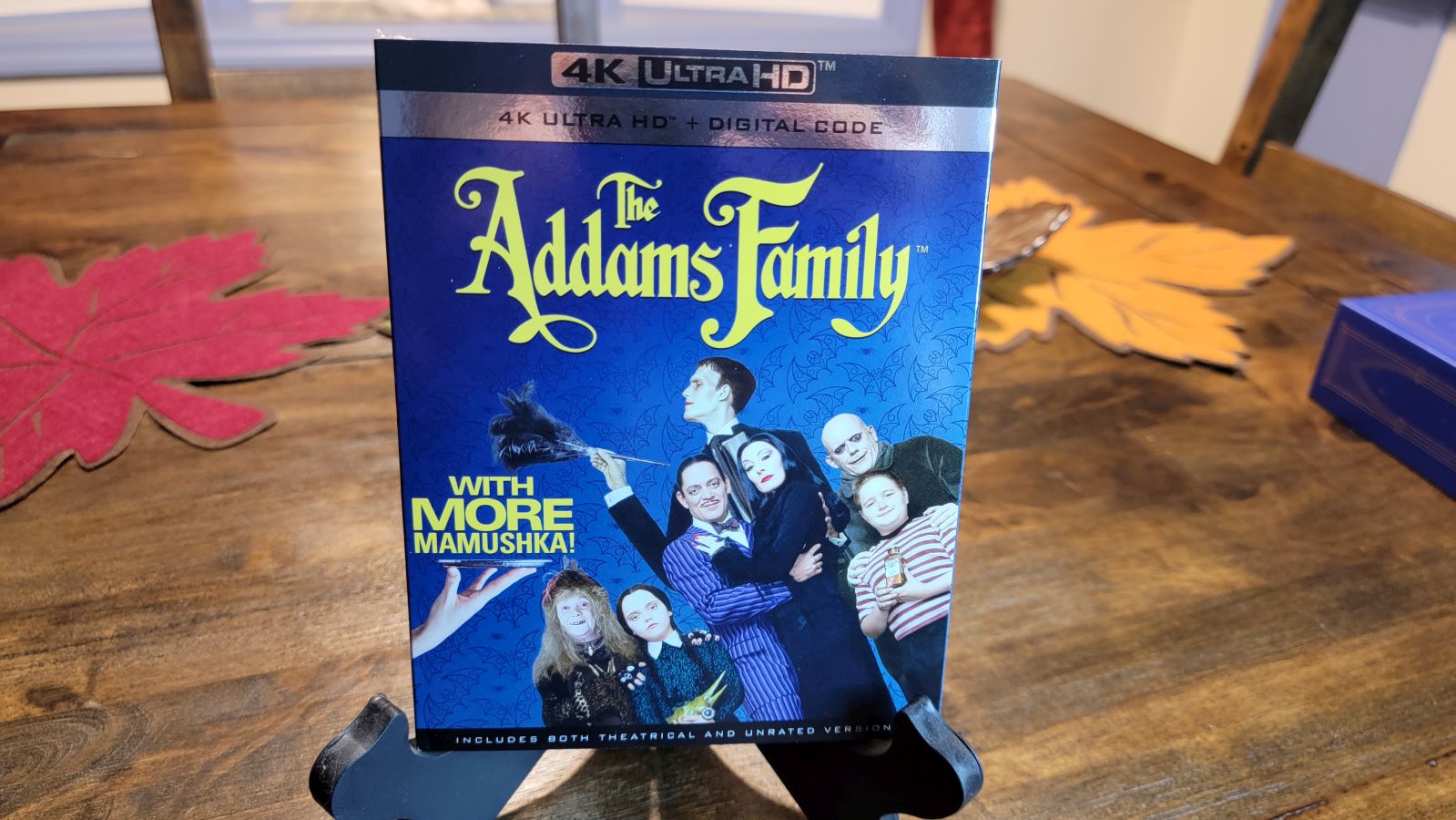 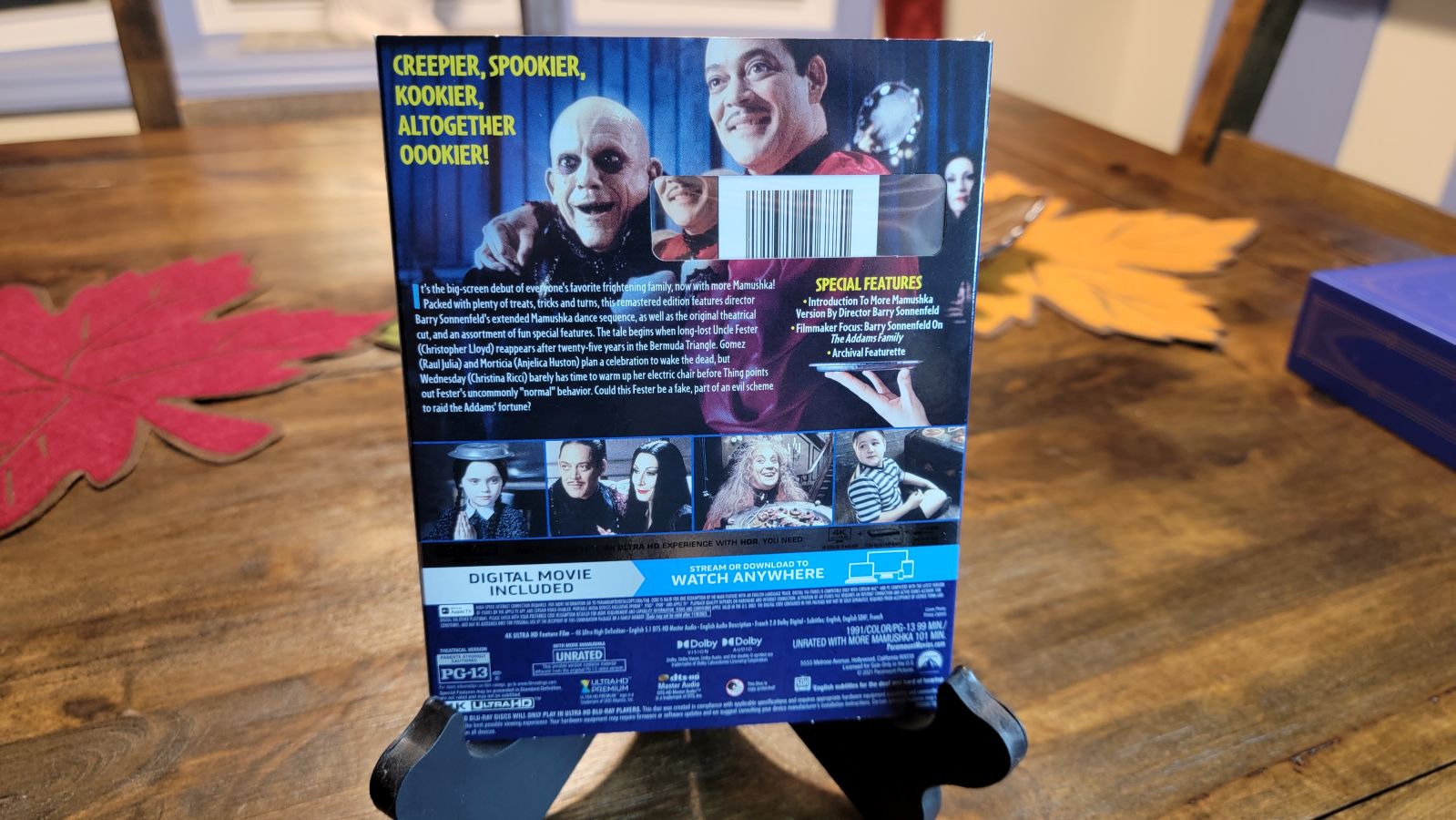 The simplest of the extra features is the introduction to the Extended – or the “More Mamushka!” – Edition, by Director Barry Sonnenfeld. At less than 30 seconds long, this shot from home introduction explains that all previous editions of The Addams Family had only presented parts of the Mamushka dance, and for this edition the original negatives were found and the complete dance was remastered. Watching the film, you’d have no idea where the dance was cut originally, as the scene flows together incredibly well and fits right in with the rest of the film. I honestly have no idea why the scene wasn’t shown in its entirety in the first place, especially at only two minutes long.

Filmmaker Focus: Barry Sonnenfeld on The Addams Family:  This 17-minute-long documentary again features Sonnenfeld recording from home, but this time with a full-fledged breakdown of the film and the hardships which occurred during filming. Sonnefeld takes a deep dive into the past to explain how he came to be chosen by Scott Rudin to direct The Addams Family, despite having never directed before. Previously a cinematographer, Sonnefeld reluctantly agreed – provided Rudin fixed the problematic script, which was a far cry from the movie we know today. Being from a cinematography background, Sonnefeld explains how hard it was to find a cinematographer that he could trust and not micromanage. Of particular note is that after a full cast table read the actors hated the original script ending so much that they designated then 9-year-old Christina Ricci to be their spokesman in hopes of convincing Sonnenfeld and Rudin to change the ending. Hint: it worked.

Additionally, there is a funny story about how Pugsly was cast, involving his sister auditioning for the role of Wednesday and being rejected, while Jimmy Workman had merely tagged along for the audition, yet walked away with a part. Sonnefeld then takes time to explain the iconic sword fight, his self-proclaimed favorite scene, the scene he hated shooting, how the sets were built, the magic of bringing Thing to life without the use of CGI, and how horribly over budget and behind schedule the filming went, eventually causing Orion to sell the film to Paramount Pictures.

Overall, this documentary is insightful, although I would have loved to hear the thoughts of some of the remaining cast members in celebration of the film’s 30th anniversary.

Archival Featurette: This is an 8 minute long featurette from the movie’s original release. From the outset you can tell that this featurette is from 1991, as it is not updated to the same standards as the blu-ray, although this isn’t distracting. Unlike the Filmmaker Focus, this documentary features interviews with most of the original cast: Raul Julia, Angelica Huston, Barry Sonnenfeld, Chirstina Ricci, Jimmy Workman, Judith Malina, and Carel Struycken.   Unfortunately, Christopher Lloyd is noticeably absent; although many of the cast members speak about how grateful they were to work with him on the set. While this featurette deals with many of the same topics as the Filmmaker Focus, it is nice gaining insight from the cast. This is a great featurette, even if it is a bit too short.

The Addams Family 4K Ultra HD Blu-Ray and Digital 4K Ultra HD is the best edition of the seminal film that you’re going to find. I doubt a better looking release will come along within the next few years, and while this isn’t a movie that you’ll use to wow your friends with your 4K set up, it’s still a great looking upgrade to a fun, timeless film. Coupled with short, but interesting extra features, this is a great package for any fan.

Richard Allen is a freelance writer and contributing editor for various publications. When not writing for Gaming Trend you can find him covering theatre for Broadway World, movies and TV for Fandomize, or working on original stories. An avid retro gamer, he is overly obsessed with Dragon's Lair. Chat with him via @thricetheartist on Twitter and @richardallenwrites on Facebook and Instagram.
Related Articles: The Addams Family 4K Ultra HD Blu-Ray
Share
Tweet
Share
Submit