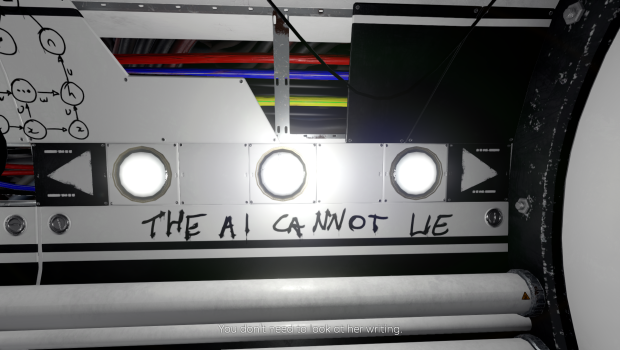 Event [0] is an exploration game that skillfully uses puzzles and conversations to guide you through its story. To progress, you will need to carefully explore every area of the spaceship Nautilus to find clues to help you with the game’s puzzles while learning about the ship’s dark past. You will also need to strategically navigate conversations with the ship’s A.I., Kaizen, who can be moody and can change its attitude and responses based on your answers.

The opening to the game immediately draws you in with its text based character creator, reminiscent of Mass Effect in the way that you decide your character’s past. The opening sets up the world in a fast but precise way that even though it only takes about two minutes to complete you feel a connection to your character and the world they are from.

Writing in the hall leading to the bridge

Event [0] has such an amazing atmosphere to it; as a game that is heavily based on exploration, this is important because it is crucial to character immersion. Kaizen, the ship’s A.I., is there to help you, and without it, you can’t progress through the game at all. However, the way it talks to you at times makes it seem like you are never safe around it. This creates such a suspenseful, eerie feeling in the game. To add to this atmosphere, the game uses some really great subtleties that make the world seem so real, such as debris hitting the ship for no reason or rooms being staged in such a way that you can tell something happened in them but there is no explanation as to what. Along with this the game’s use of music is incredible, when the first song came in at the end of the opening I got chills.

Event [0] excels at combining your ability to explore your surroundings, converse with Kaizen, and solve puzzles to get you to progress through the game. The in-game puzzles are challenging without being unfair and the game makes sure you have everything you need to complete them as long as you explore your surroundings. The longest I found myself stuck on a puzzle was probably about 5 minutes, and that’s because I hadn’t done enough exploring. While a playthrough only takes about one to two hours, the ability to get more than one ending due to conversations with Kaizen adds some replayability to the game; I immediately wanted to see if I could change the outcome.

Debris breaks a window on the Nautilus

While the game uses one of the weirdest control setups I have seen, using the left and right mouse buttons to move forward and backward respectively, the controls don’t feel too awkward and you’ll get acclimated to them after a few minutes. You can switch to the more common WASD setup in the games menu at the cost of turning off Kaizen when you walk away from its terminals. The traditional setup is detrimental to the experience, as Kaizen will say things while you are aren’t present at a terminal. These statements will be accessible when you go back to a terminal, but the lack of hearing them as they happen makes the world a little more empty.

The glaring problem with Event [0] is that it doesn’t seem quite finished. The awesome character creation that sets up the mood and the story of the game doesn’t really matter once you get into the game proper. Sure, the game makes a couple of references to the character you meet in the opening, but where do my choices come into play? All the decisions you made about your childhood and how you chose to act doesn’t really matter in the end, which makes it feel like all the time you spent customizing your backstory was pointless. Event [0] also felt like it didn’t really have much of an ending. I experienced two different endings, both of which basically tell you what is going to happen next, but seem to cut off right before the big payoff and leave you wanting more. The games also misses the opportunity to create a fuller world by giving the player more story in the world’s items that aren’t required to progress, such as diary pages that tell us about the crew of the Nautilus’s past.

Event [0] is a fun and interesting exploration game. Its use of conversation to progress the story is one of the more unique things that I have seen in recent memory. It is a little short, but the ability to get a different ending lengthens the game. While the game does feel like it is missing something in its story, the overall experience is memorable and enjoyable.

Zach has been a gamer ever since he picked up a PS1 controller and played Asteroids for the first time. From FPS games to Point-and-click adventures, Zach knows no genre that he can't get into. When not playing games, he spends his time looking at the newest computer components on the market and dreaming of a day when he can buy them.
Related Articles: Event[0]
Share
Tweet
Share
Submit