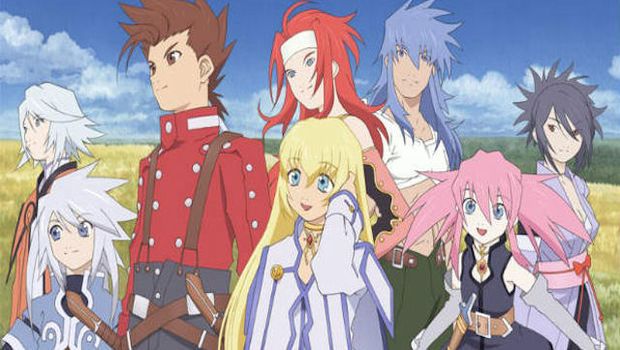 The Tales Of series are some of the best and most beloved J-RPG titles that currently exist, with droves of loyal fans and a winning gameplay formula that is still running strong after nearly 20 years.  However, even amongst its numerous installments (of 30+ games) 2004’s Tales of Symphonia stands out as something special. Maybe it was because it helped make the Gamecube something worth owning, or maybe it was because it was rare to have this series localized outside of Japan, but I don’t know anyone who played this game and didn’t fall in love. Now, a decade later, Tales of Symphonia has gotten the HD spit-and-polish treatment and has returned as a 2 game combo pack Tales of Symphonia Chronicles for the PS3, and man is it nice.

As an HD remake, I suppose the first thing that should be addressed is the title’s largest selling point, and that’s how gorgeous it looks. Even with the impeccably well balanced architecture between artistic design and graphical execution boasted in the originals, Symphonia Chronicles is just that little bit better that makes it worth it. Most of the hard edges have been buffed out, the animation of the series’ famous “skits” is crystal clear, the sound is pitch perfect no matter how you listen to it, and all of it done without making the game seem dated; and to this I say with a bow and a tip of my hat, “…bravo.”

Beautiful is still different from flawless though. Particularly on the world maps and other free roam areas of the game, icons for enemy encounters or locations seem retrograde in comparison to the rest of the title’s polish. When even a black, eyeballed, blob suffers from jagged polygon edges, you feel like a straight up model replacement may not have been too much to ask for. Even if keeping the original elements of the game was required scripture for the production staff, the option to select between something just a little more refined would have been an appreciated touch. After all, the original Japanese and English voices can be toggled at any point in the game, in addition to all sorts of various other pieces of content that was previously exclusive to particular console releases. It may not seem like a big deal to read about, but when you play the game it sticks out like an orange in an apple barrel.

One the gameplay and control side the release is absolutely solid… for a port. Symphonia Chronicles plays almost identically to the originals, with the only exception being whether or not you played it on the Gamecube, Wii, or PS2. That said, if you didn’t feel those controls from years ago were as tight as you would have liked them, they haven’t gotten any better. Characters still seem to float between attacks and motion, feeling more like lofty marionettes than purposefully animated characters. The craft of frame-rate, hit detection, and controller input always feels just a little off, which can be frustrating when attempting to string combos or block attacks. This however, is very much a point of preference, and less a mark of bad design. This part of the game is as it was, and is more of a blemish (if any) on the original game than its glossy reincarnation.

The thing that stands out the most about Tales of Symphonia Chronicles though is the obvious beauty and careful construction of its original production. From the animation choices, to the art direction, to the combat and stage design, these games were very intelligently made; genuinely interested in telling a fun story and providing a good time with the tools available. Because Symphonia wasn’t trying to “break boundaries” before is what allowed it to be a great HD release now. When a re-released game is one that was originally supposed to be “something to behold”, it shows years later when its accomplishments have become the standard. Symponia Chronicles is the crayons transition to the marker, not the horse and buggy to the Model-T. This allows even the most basic improvements to cascade into something truly nice and enjoyable, things that got us all into playing games in the first place.

Tales of Symphonia Chronicles is definite must-have for any Playstation 3 owner and/or fan of JRPGs. It’s a great value for the money and two great games with all the extras you could want. This is your something new and something old all in one and a game that once added to your collection you’re never going to want to be without. If you even think you want it, go out and get it.