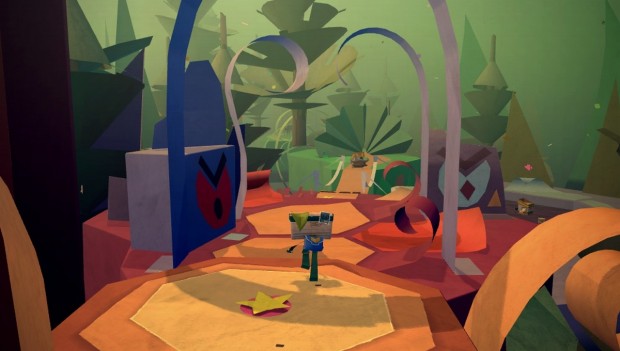 It’s official: Media Molecule is much more than just “the LittleBigPlanet studio.”

Tearaway is host to a wonderful world of paper. Everything here — from the sky and the clouds to the leaves and the grass — is made of paper. Part Psychonauts, part Scribblenauts, and part LittleBigPlanet (-nauts?), it’s a beautiful, unique display unlike any game before it. But more than just an exceptional-looking title with a mashup of influences, Tearaway blurs the line between game world and real world. This journey is one that will not be easily forgotten, and has earned the status of must-play.

At first glance, Tearaway looks to be a simply a third-person, 3D puzzle platformer, but there’s a lot more going on underneath the paper-thin aesthetic. As the player, your role in this title is rather unique — you’re actually playing as two characters. Utilizing the analog sticks and face buttons directs a messenger named Iota throughout the wonderful papercraft world — running, jumping, throwing, and interacting with a plethora of charming characters through beautiful, varied settings. On occasion, Iota does battle with Scraps, the resident antagonists in this universe bent on derailing his (or her — your choice) quest to deliver a very important message.

But when using the touch screen and rear touchpad, you’re filling the role of the “You,” Iota’s companion with god-like power over the surroundings. As the You, you’re invisible to the inhabitants of the world of Tearaway, but your influence is evident around every corner. A press of the rear touchpad can bounce objects, or even cause your finger to burst through certain areas of the paper world. A swiping gesture across the front screen can peel away coverings to reveal useful areas. And your face — as captured in real time by the PlayStation Vita camera — is present in the reigning sun at all times.

You have a tangible role in the world of Tearaway

Serving as the You gives you a tangible role in the world of Tearaway, both actively and in the scope of the narrative. When characters meet Iota, they are fascinated that he has a You in tow, and they marvel at your influence on their world. This is what makes the handheld platform for this title so perfect — it feels as if you’re holding a little universe in your hands. And I couldn’t help but grin every time I saw my face in the sun; it never ceased to surprise me.

Tearaway doesn’t stop there — another way that it works to blur the line between the real world and the game world is the use of Iota’s camera. Iota will spend much of the time taking pictures of objects, be it by the request of another character or at your own desire at any moment. Some of these pictures become memories themselves when they’re referenced later in the game, but any can be shared to your own personal space in the tearaway.me website for players around the world to see.

Some of the objects in the game world are all white, without any color or detail. Having Iota take a picture of such an object restores it, but also enables an inventive feature of Tearaway. The game leverages its idea that everything is made of paper so that you can bring parts of Tearaway out of the game world and into yours. Taking a picture of a white object unlocks it as printable papercraft. Log on to tearaway.me and you’ll find all of your unlocked papercraft complete with instructions to download, print, and assemble. The results are perfect replicas — my wife and I have loved bringing the game’s pig, gopher, and squirrel characters into our world, and are looking forward to crafting more.

You’ll be working with some of your own in-game papercraft as well. There is a smattering of optional objectives throughout Tearaway, and many of them entail using the touchscreen to draw lines on pieces of colored paper and cut out your own custom objects — which later are used in the game world in some way. It’s akin to another creative game, Scribblenauts, though instead of using words or phrases to complete objectives, you’re cutting out shapes. Unfortunately, the feature may not be as robust as expected.

The tool is rather restrictive — you’re quite limited in how much you can draw before “cutting out” your object. At one point, I was asked by a character to draw a snowflake, so I was ready to hunker down and do some detailed work. But with such a stringent limitation, I couldn’t draw enough to really approach what we know of paper snowflakes. Even so, it was rather cool to see my chintzy shapes flying through the sky afterwards.

But you don’t have to custom-craft everything that you use in the game world. You’ll be collecting currency during your play-through that can be spent on paper objects that you can attach to Iota and other characters. Customizing the in-game characters is a lot of fun (if I can give it a bowtie, I feel like I have to), and it gives incentive to share photos on tearaway.me. You can also spend the currency on camera filters, but they’re mostly aesthetic, rarely used to solve in-game objectives.

There are a lot of reasons to play again

With unlockable papercraft and optional objectives, there are a lot of reasons to want to play parts of Tearaway multiple times. Fortunately, you’re able to replay any area of the game at any time, even after the credits roll. In addition to an overall completion percentage, Tearaway provides an individual percentage for each area of the game, making it easy to zero in on which ones have more to discover. But even without extra tasks to accomplish, it’s worth revisiting just to experience the amazing papercraft world all over again.

It’s rather remarkable how fantastic Tearaway feels to play while in the absence of almost any real challenge. You can’t really lose. If you misstep and fall off a platform, Iota will reappear close by — the checkpoints are very forgiving, and there are no limited “lives” to worry about. Even if you’re defeated by the Scraps, you return to the checkpoint without losing progress in your battle (a la Bioshock’s Vita-Chambers). As a result, there’s never any need to retry a scenario unless you’re doing it voluntarily to look for more papercraft or side objectives. Tearaway is less about challenging and more about giving every opportunity to see everything it has to offer — it’s a bit like Kirby’s Epic Yarn in that regard.

Media Molecule has an uncanny talent for creating universes unlike anything before them. But with Tearaway, they’ve gone several steps further. By casting the player as a character in the game, and through the use of the Vita camera, this title makes us reevaluate where a game world stops and reality begins. Guiding Iota in his quest to deliver his message is engrossing both in how you influence his world and how he influences yours, and printing out papercraft allows you to put a keepsake on your bookshelf (I now have several on mine). At under ten hours, a play-through can be over too quickly, but only because you won’t want it to end. Here’s hoping that Tearaway will not be our only chance to tear into Media Molecule’s papercraft wonderland — I already want to go back.

The papercraft world of Tearaway is full of beautiful landscapes, charming characters, and creative gameplay, but it also seamlessly melds with the “real” world in unprecedented fashion. Upon completion, it will feel like your own story, different from anyone else’s. The conclusion is simple: no PlayStation Vita game collection is complete without this title.