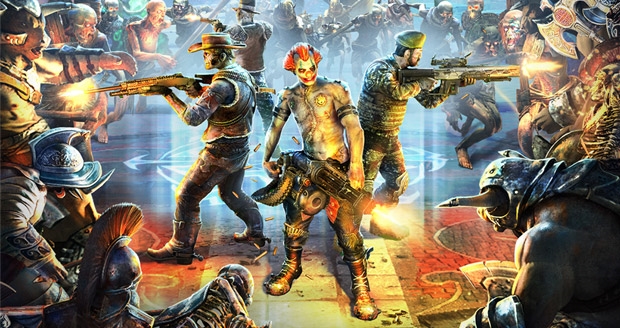 [singlepic id=11991 w=240 h=180 float=right]God Mode, developed by Old School Games in conjunction with Saber Interactive and published by Atlus, is a story of redemption. Apparently the players in the game are bastard half-breed children of  Greek gods, and having died are put to the test to see if they’re worthy to ascend from the depths of Hades. Each of the five included levels are laid out in multiple combat zones that are a host to waves of monsters. Every combat zone holds a statue which activates a randomly selected “Trial” – a modifier to the combat in that area. From bombs falling from the sky to harder enemies, random weapon changes or constantly depleting health, the game looks to challenge you in combat. On the flip-side, some offer a break for the players – effects such as blood turning to money, making enemies weaker or giving more experience per kill. In short, these Trials keep the game from growing immediately stale, and for the most part are well implemented.

Enemies are, in line with the story and art, interpretations of Greek mythology – the monsters include harpies, cupids, minotaurs, skeleton legionnaires and cyclops. The combat itself is almost lifted right from Serious Sam – third-person shooting with hordes of enemies of varying types swarming at you. Equipped with two upgradeable weapons, a melee attack and a rage-meter power-up, you’ll wade through wave after wave of monsters earning both gold and experience.

[singlepic id=11995 w=240 h=180 float=left]Initially it felt like a grind-fest without much reward. The starting weapons, an SMG and a double-barreled shotgun, were not a whole lot of fun right out of the gate. If you start a custom match and play single-player, even the easiest mode, you’re not likely to survive. Playing online with others pools everyone’s extra lives together, and since the people you play with don’t seem to be level restricted you can end up being a weaker tag-along who can then survive the entire challenge. Gods help you if you end up with someone who doesn’t follow any chat etiquette though – I couldn’t find any simple method to mute an annoying player, like one who’s microphone is picking up everything in their life and drowning out my game.

The status quo for modern shooters is that the incentive of multiplayer is leveling up and gaining access to new goodies, be they weapons, power-ups or even new threads. God Mode didn’t miss the boat on this, and has included almost a dozen unlockable weapons each with their own upgrades. Your rage meter power-up can be swapped out from the initial shield to eight other abilities that range from a healing aura, to bonus rewards all the way up to the “God Mode” where, for a brief period of time you’ll become invincible. Clothing and accessories are also available to swap. I must admit they are a bit lacking, and are, for the most part, a rehash of of the lower level items.

[singlepic id=11993 w=240 h=180 float=right]All unlockables come at a cost – both money, level requirement, and in the case of the final upgrade on your weapons, you need to have purchased the previous upgrades. For this single reason, I found myself playing “just one more game”. If you’re willing to risk a bit, you can also select one of seven oaths – restrictions you put on yourself (such as no rage power-up) in exchange for an increased percentage of experience and money.I found that God Mode scratches an itch similar to the Zombies multiplayer mode found in the Treyarch Call of Duty games.

Though graphics are great for an XBLA title, at the beginning of each map there is a period of time where you see all the textures and bump-mapping popping in, and there were several occurrences of physics issues. The voice acting of the Spirit Guide is appropriately sardonic and taunting, though there are definitely some repeat phrases that should have been caught in testing. God Mode is geared to reward players of higher level, and until you get there expect to spend a bit of time feeling frustrated. In combat when a monster is killed, the person with the killing blow gets the credit – it drives competition, but it would have been nice to see this as a selectable option when establishing a session. [singlepic id=11989 w=240 h=180 float=right]Speaking of which, the party system is functional but far from being ideal – I found that running an XBL party was far more effective than the in-game system. My last critique is the friendly fire in the bonus room after a surviving one of the mazes. While it is touted as a benefit, I found no appreciable gain in shooting each other over everyone simply racing for the bonus gold, yet sometimes there are a few will do so for no reason other that to cause grief.

Griping aside, Old School Games delivers an experience that marries modern expectation with classic retro shooters. At its heart God Mode is a fairly well-balanced game, with a surprising “one more time” appeal, if you can accept the low level grind. The cost of entry is low, and even though there are no announcements of DLC the game can certainly entertain you for more than a couple hours. This is especially true if you’re interested in unlocking and upgrading your arsenal. There is a demo available on XBLA, so if you haven’t tried this 800 point game I’d recommend giving it a go. It’s not a large sprawling Serious Sam encounter with a noteworthy single player campaign, but it certainly changes things up enough to keep you coming back for more.