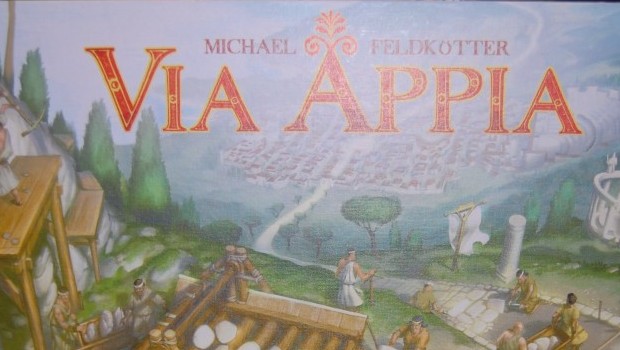 They say that Rome wasn’t built in a day. I have a feeling that neither were their roads. With Rome being a major port for trade and culture, the reach of Rome spread much further beyond the city’s limits. Rome conquered Brundisium and became another naval port for the Roman Empire. The two cities were connected by the Via Appia and Via Traiana. The game Via Appia is about building that road between those two cities.

As you can probably imagine, there was a process to building Via Appia. You need money to not only get the resources but to travel between the two cities. The quarry has rocks that can be used to build. Then those rocks are used to construct the road, and finally travel can be made along the part of the road that has already been constructed. Your options in Via Appia are similar.

Each turn you have one of four options. To gain income you can select one of seven income cards laid out. One half shows a number of sesterces, while the other half shows a number and type of stone. When four or more cards are available, you can get either the number of sesterces or the stones. When three or less are available, you receive both sesterces and stones shown on the card. If you choose the last card available, you get a “Push +1” token that is good at the quarry as long as you don’t already have one. After all seven cards were flipped to show that they were used, seven new cards would be dealt. I wondered if people would wait to take income until they could select a card that would give them both stones and sesterces, but sometimes it would be more advantageous to get a single option than to get both.  It’s a good balancing mechanism.

The quarry is one of the most unique portions of any board game that I have seen, integrating a dexterity element to the game. The quarry is set up at the beginning of the game with a number of stones in it at random. There is the tan large stone, the medium white stone, and the small grey stone. A player can take any stone they have accumulated, place it behind the quarry line, and push it into the quarry using the pusher. The player can do this twice, or three times if they have a “Push +1” token. Any stones that fall out can be exchanged for a tile of the same size or smaller, or it can be sold back to the bank for a sesterce. I have to admit, this is a fun part of the game, but you have to be careful that it is understood that you “push” and not “slam the pusher as hard as you can against the stones in the quarry” as my twelve-year-old nephew did.

If you want to empty your cart, you need to construct Via Appia. Three segments exist between Rome and Brundisium, with the cities Tarracina and Benvenutum as the other end points of each segment. You can lay down one or two tiles for road construction, but the second tile must be in the same segment as the first. Also, to build in a segment beyond the player’s piece, all the previous road segment must be complete. Each segment shows which tiles need to be laid down, and paths between the tiles show which order. You gain points for laying down tiles, with the larger tiles worth more points, and you also take a bonus token for each tile laid down in that road segment. Not being able to lay down two tiles in the segment ahead of you is another great balance mechanic that does help those behind catch up, but it doesn’t hamper the player in the lead much.

The final option is to travel. Each player has a token representing their place on Via Appia. Players can travel up to three spaces, but the further you move the more sesterces it costs. You can also only travel on tiles that have already be laid down. A single player can stand on the small and medium tiles, but two players can stand on the large tile. The first player to a city gets the most points, with the second and third player getting a lower amount of points. As players reach each city, the cost for movement goes down a sesterces.

The game ends when either Via Appia is completed or a player has claimed a victory point token in Brundisium. When either condition is met, a full game round is played so that every player has the same number of turns. The player with the most points at the end of the game is the winner. Bonus points are awarded to the player who built the most and second most tiles in each segment. If there is a tie for the winner, there isn’t any tie breaker, so all players with the highest score are winners.

The best part of Via Appia is how it flows. The number of options are limited, but each option has its own decision to be made, so strategy exists with each decision. The quarry is a great innovation and it fits within the game.

Via Appia looks great, and each part of the game reflects the theme. The dirt road starts to look a little more finished once the road tiles are placed. The storage areas look like they have stone walls to hold them. Water surrounds the play area, with mountains forming a ridge between the road and the rest of the play area.

I was skeptical when I saw that this was for ages eight and up, but when my niece tried it, she was able to figure out how the game worked without any problem. Her strategy wasn’t the best, but she figured out what her options were and how to do each one when she wanted to.

The components are high quality. The tiles are made of thick cardboard, and surprisingly the income cards are as well. I’m sure that it cost more to make the income cards out of cardboard, but they will definitely last much longer because of it. The pusher and stones are made of wood, and they will hold up well even after being pushed against each other multiple times.

The instruction books is four pages, but the rules are laid out with plenty of graphic examples of how they work. The first page shows the components and the goal of the game, with the next one showing the setup. The other pages give the rest of the rules. Since it is a simpler game, the rules are concise but thorough, and they don’t need to be any longer. I had a pretty good idea of how the game would play with a single reading of the rulebook.

Via Appia is on the lighter side of gaming. That being said, it shouldn’t be easily dismissed by gamers who like something with a little meat. There are enough choices to make each game unique, with enough variation and luck in each game that each play will be different. It’s not going to replace something heavy like Twilight Imperium, but it has enough range to satisfy almost everyone.

There is another old adage about judging a book by its cover. I guess you can say the same thing about the theme of a game. When I heard what Via Appia was about, I didn’t think it was going to be interesting enough to make it fun. I’m glad that the rep from Queen Games insisted that I take a copy with me. While it’s not what I would consider a gateway game, I can easily recommend it for just about any group of gamers. Just try it, it will probably surprise you.