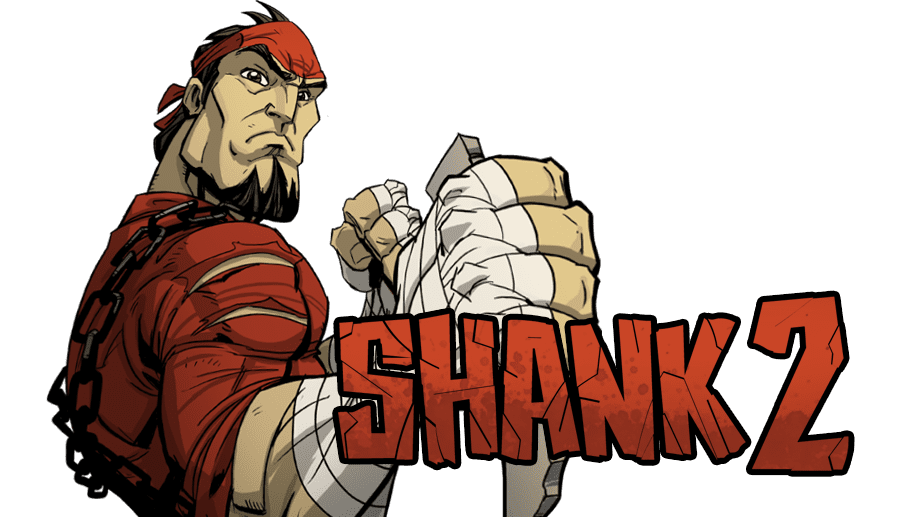 I never played the first Shank, so for me, Shank 2 is new territory. Having read up on it, the original was seen as somewhat groundbreaking for its time, with a colorful display, co-op gameplay and a solid re-imagining of retro gaming 2D side-scrollers like Bad Dudes, E*SWAT, Altered Beast or perhaps even Metal Slug. The only other contemporary game I can think of off the top of my head is Bloodrayne Betrayal. While I might be tempted to clump in Castle Crashers, that wasn’t 2D so much as it was a 3d side-scroller presented in 2D. What I mean is, Shank 2 doesn’t allow you to go into the foreground or background to avoid being hit. You are there, in the middle, and all you can do is jump up, crouch down, move left or right.

[singlepic id=10279 w=200 h=150 float=left]The meat of Shank 2 is its eight levels of mayhem, where Shank gets to shoot, stab, slice, impale, blow up, spear, and beat bad guys to a pulp. The story surrounds him visiting an orphanage only to find his sister has been kidnapped by a deranged overlord bent on finding a replacement heart for himself. I’d tell you who ends up having a matching heart, but gee, that would spoil about the only mystery of this game.

Along the way you’ll get to unlock 3 heavy weapons, 3 ranged weapons and 3 explosive weapons to use as you see fit. They all have different strengths and weaknesses, and I found that the default weapons at the beginning of the game still had purpose throughout.[singlepic id=10284 w=200 h=150 float=right]

That doesn’t mean the game is well balanced, mind you- far from it. I almost gave up on the second level, when a group of firebombing baddies turned Shank into ashes. Over, and over, and over again. I wasn’t even sure they’d developed the game beyond that point, since I was sitting on normal (there is no easy setting), and try as I might, could not progress. Fret not, I eventually came back to it and managed to defeat them.

If this was the one time my vernacular was reduced to a rainbow of four letter words and was entirely unique through the course of playing Shank 2, I would have probably mentioned it as a passing “some parts can be very difficult”. But no, the game is a series of imbalanced holes of frustration where you will too often die over and over, and spend more time on one or two set pieces than you do on the rest of the level. Thankfully the restart option has save points rather than being forced back to the beginning of the level, and you can also change your weapons before taking another bash at it.

[singlepic id=10282 w=200 h=150 float=left]I’m not one to throw the baby out with the bathwater, so if you’re into extremely hard pockets of gameplay, then Shank 2 may be right for you. If frequent save points, being able to change weapons during respawn, co-op survival mode, unlockable costumes the artwork and relatively low cost counterbalance the thin story, lack of co-operative campaign, broken keyboard controls and the relatively short two-hour story, you should probably be looking for this title, which can sometimes be found on sale. If you enjoyed the incredibly hard games for the challenge alone, then this might just be right up your alley.

If you’re like me, however, when you’re coming up with phrases that would make a trucker blush, it really didn’t matter that you can unlock a good dozen or so skins to play instead of the default Shank character. All you’ll care about is that it takes you fifteen times to kill seven-to-ten bad guys in tight quarters who are lobbing grenades, fire bombs or even swinging gigantic shovels (often at the same time), or facing ridiculously difficult boss battles for the first three-quarters of the game, only to then kill an almost laughable final boss battle at the end.[singlepic id=10283 w=200 h=150 float=right] To top it all off, if you decide to go at this game without a decent controller (I used a 360 controller with a wireless PC adapter), you’ll end up using the mouse and keyboard in a control scheme designed by a sadist.

Perhaps if there was a second player and the camera zoomed out a bit, the area attacks (grenades, fire bombs) wouldn’t have been so unbalanced or quite so frustrating. I would only recommend this game to those who have attached themselves to Shank’s story from the first game, or perhaps the hardcore gamer that enjoys a challenge. The art is good, the mayhem is there: too bad it sometimes feels like you’re bringing a knife to a gunfight.