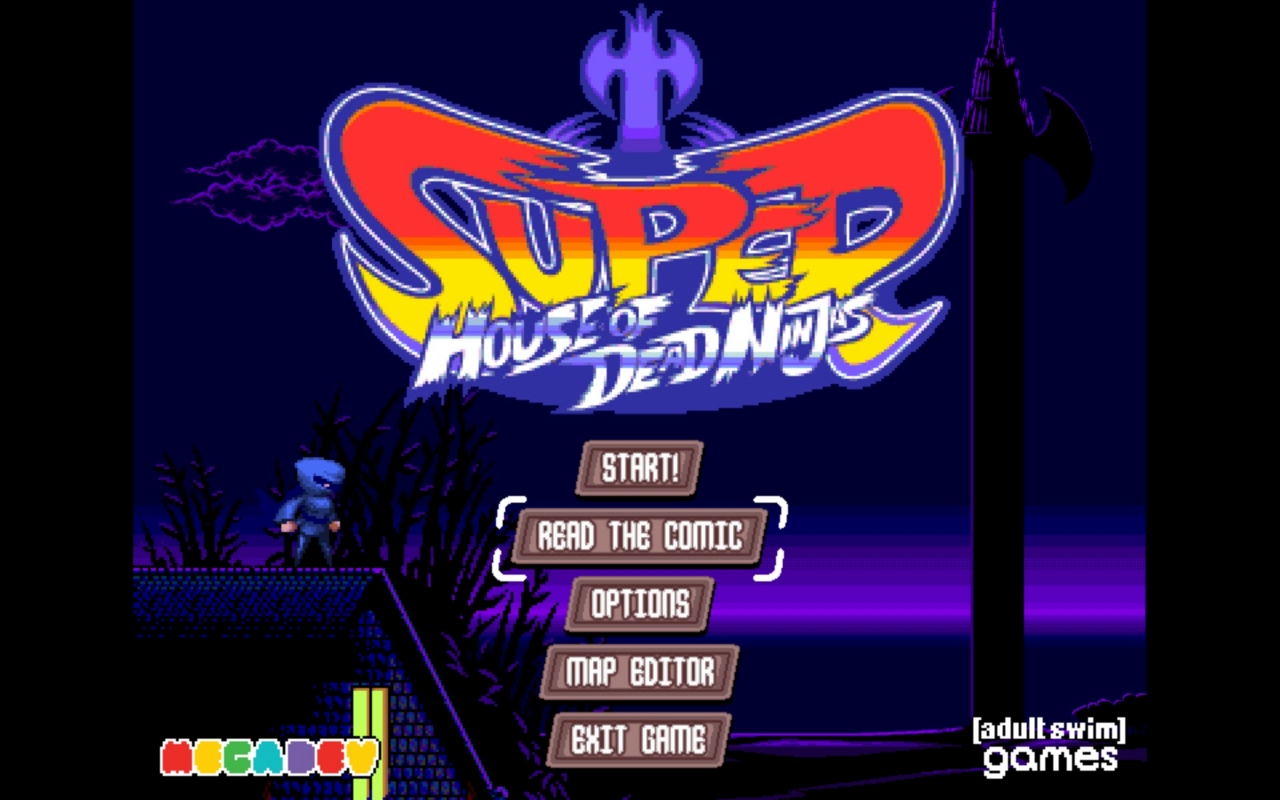 [singlepic id=11553 w=240 h=180 float=left]Picture this: a game opens to the title screen and the only introduction is an on-screen hint that suggests you read the comic – it can’t be all that interesting, right? I mean, the graphics are a throwback to somewhere around the 8bit era, the combat is similar to that of the original Shinobi, and the premise is almost laughably simple:  descend a castle made up of over 500 floors of enemies. What’s worse, it uses the dreaded timer mechanic.

You might be tempted to write this off, but wait! Super House of Dead Ninjas is actually a fun game that you can pop in, play for a bit, and then get sucked into the “one-more-time” that eats away an afternoon. A palette-cleansing experience that doesn’t take itself too seriously, the games’ fast pace pushes past the few flaws that I’ll inevitably point out.

[singlepic id=11562 w=240 h=180 float=right]For starters, there are more than a few times where “I got that guy!!” but somehow the Super House of Dead Ninjas’ opinion differed. Given the number of lives you have (which will increase based on how many times you’ve died), it comes down to reaction time vs. pixel graphics – but you’ve re-spawned and moved on long before you have time to care. Sometimes it feels like the weapon you swing isn’t connecting – I found that swinging a little earlier is better than later. I should also note that the game comments on your gameplay – so if you manage to double-jump and narrowly miss a set of spikes (for instance) it’ll remind you that you’re awesome, or attempt to console you for an unexpected death.

[singlepic id=11557 w=240 h=180 float=left]Speaking of graphics, don’t expect to have your mind blown with tessellation and realistic physics. Super House of Dead Ninjas is not trying to impress anyone outside of the pixel-geek category, which is OK in my books. The game is all about speed and balance and having volumetric lighting and mip-mapping might just get in the way. That’s not to say the game couldn’t use a little higher resolution and polish, but I’m positive they’re trying to hit the nostalgia nerve, and they do it ferociously.

The fun is found in exploring the randomly generated castle (as well as a secret area that requires you to earn tokens), and unlocking new and interesting weapons and items with each attempt. Basically achievements themselves, collecting new gear is the dangling carrot that gets you to try out different gameplay styles. You aren’t limited to the hacking and slashing of your main weapon, either. With the ever powerful magic spells, you wreak havoc on all on-screen enemies. [singlepic id=11564 w=240 h=180 float=right] Then there are thrown weapons such as the shuriken and axe, as well as your explosives category which offer weapons like grenades, Molotov’s and even blasting through walls and floors with dynamite.

The controls are solid, and they must have put significant thought into downward attacks – since you’re constantly falling you need to be ready to kill that which lurks below you. An attached gamepad simply works better than the keyboard, though the old standby works well enough in a pinch. From jumping, sliding down walls to swimming and double-jumping, I found myself wasting many an hour looking for the next weapon or item, and enjoying the challenge – and thankfully there are milestone points that you can start from, so you’re not forced to start at the top of the tower each time.

Super House of Dead Ninjas isn’t trying to be anything other than a fun diversion in a market glut with games which are trying to define gaming, and it succeeds on both counts. This indie titles snuck its way into my PC gaming rotation and will likely remain for quite some time. As a pick-up-and-play game with tons of challenges and randomized level design, it’s a fantastic tribute to 8-bit nostalgia  supported by solid gameplay. Highly recommended, if that’s your sort of thing.