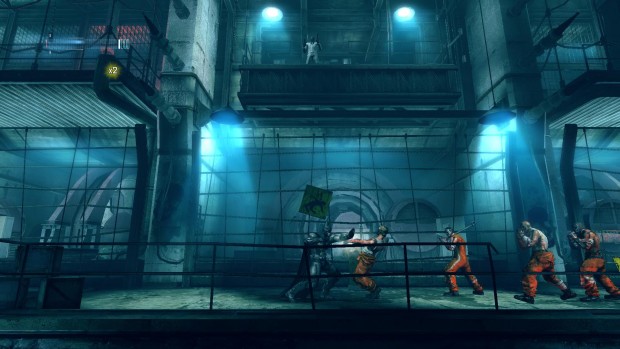 My history with Batman: Arkham Origins is… rocky, at best. I loved the first two games in the Arkham series, but I found Origins to be a broken, unnecessary mess.

So imagine my surprise when I find that Batman: Arkham Origins Blackgate Deluxe Edition is actually pretty good.

Blackgate takes place three months after Arkham Origins. The Joker, Black Mask, and the Penguin have been placed behind bars of the most secure prison in Gotham City, and as expected, they’ve caused a ruckus and have taken over different sections of Blackgate. It’s up to the Caped Crusader to stop each of them. It’s not an amazing story, but one doesn’t exactly need much context to get dropped into the shoes of the Dark Knight and bust some heads.

Where Blackgate differs from its triple-A cousin is in its presentation. Batman will find the same gadgets in his quest, beat up countless thugs in the series-hallmark free-form combat, and scour numerous environments for secret paths and hidden objects––except in Blackgate, everything takes place on a two-dimensional plane. Similar to games like Super Metroid or Castlevania: Symphony of the Night, Batman can only move to the left or right, but can explore the dilapidated locales within this prison just like he would in his full 3D adventures. In fact, the screen wraps and turns in numerous directions even as Batman is technically running right. It can be a bit disorienting at first, especially if you’re not used to sidescrolling exploration games, but surprisingly, it works.

What doesn’t work all that well is the map. Improved over the original handheld version, the Deluxe Edition’s map shows how each room is connected with each other in a clear, easy to read fashion. But because rooms and paths double back on each other, sometimes the map displays a mirror image of the area you’re currently exploring. It can be incredibly confusing, especially since the various wards of the prison aren’t laid out strictly in a left-to-right fashion.

Other additions include maps,  suits, and upgraded visuals. Well, somewhat upgraded visuals, actually. Blackgate does look better than it did on a handheld, but the textures and overall graphical fidelity feels blown up and stretched out, rather than rebuilt from the ground up. It looks fine, but as far as HD re-releases go, Blackgate Deluxe Edition it’s definitely not the best looking upgrade out there.

Still, Arkham Origins: Blackgate is a unique experiment in perception, and other than some awkward boss fights and some confusing map layouts, it works. Arkham Origins may have been more of the same in a buggy package, but Blackgate makes strides to change up the formula in some meaningful ways. And if you don’t have a handheld gaming device, the Deluxe Edition is a perfectly fine way to get some sidescrolling Batman action.

Batman: Arkham Origins Blackgate combines the series’ trademark combat and exploration and tosses them into a sidescrolling platformer with surprisingly pleasant results. The Deluxe Edition upgrade doesn’t make a whole lot of meaningful additions apart from some new content and slightly better visuals, but it’s still a fun game, despite its flaws.