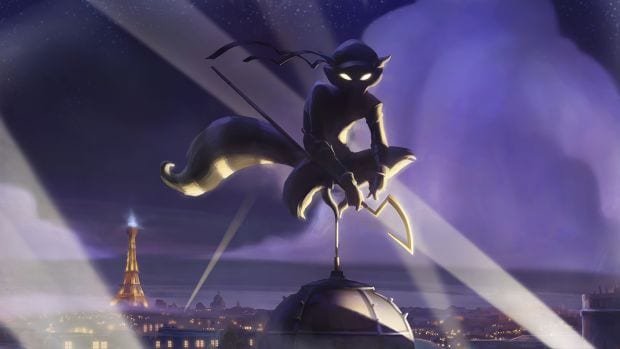 Have you ever opened up a time capsule? You fill a box with a bunch of stuff that you find interesting or sentimental – things that are representative of the time in which you live at that point. You bury it underground, or hide it somewhere no one can find it, and after waiting a few years – ten is usually a good number – you unearth it, open it up and marvel at the things you thought were important and enjoyed, and how far things have come since then.

Sly Cooper: Thieves in Time feels something like that.

It’s an amazing feat that Sanzaru Games – the studio responsible for porting the Sly Cooper Collection to the PlayStation 3 – was able to essentially recreate the entire feel and scope of the Sly Cooper franchise. Typically, when a new studio takes over a series something ends up getting lost in translation, but Sanzaru was able to capture exactly what makes a Sly game fun and interesting.

It’s sad, then, that its greatest strength – absolute devotion to its source material – is its greatest downfall.

[singlepic id=10614 w=320 h=240 float=left]Don’t get me wrong; Sly Cooper: Thieves in Time is a fun platforming romp – definitely something we don’t see very often nowadays. Lately platforming games have been relegated to the world of movie tie-ins, with the occasional Mario game thrown in for good measure. Even Sony’s other platforming property, Ratchet and Clank, has seen better days. So being able to play an honest-to-god platformer that doesn’t star an Italian plumber or isn’t based on the latest crappy kids movie is a breath of fresh air.

What takes the wind out of it is how exactly similar to the previous Sly games Thieves in Time is. It’s like Sanzaru had a checklist of everything that should go into a Sly Cooper game, and just made sure they ticked all the boxes.

Stealth-based gameplay? Check. Largish open worlds filled with hidden treasures and clue bottles to find? Yep. Being able to play as Sly as well as his cohorts? Done. Tons of different mini-games to change things up? Naturally.

You’ll run around each of the various levels, looking for secrets, taking part in different missions, all the while trying to chase after the latest MacGuffin in the Sly Cooper franchise – this time, Sly travels through time to help his various ancestors restore balance to their lineage’s time line. The entire game feels like Sly Cooper – from the art style, to the voice acting, to setting up then pulling off each level’s final heist, to even the most basic actions of running and jumping. It may not be the most technically impressive game on the PlayStation 3, but Sanzaru has completely nailed the presentation by creating a living cartoon world.

But rather than elevating all of these different elements and making something fresh and exciting out of old gameplay mechanics, Thieves in Time feels like it could have existed on the PlayStation 2. It plays like an HD re-release of a “lost chapter” of the Sly Cooper saga, rather than actually evolving the series in any meaningful way. It’s all of the same Sly gameplay you’ve played before, but that’s just the problem — it’s the same game from almost ten years ago, dropped into the modern era of game design.

[singlepic id=10615 w=320 h=240 float=right]To their credit, Sanzaru has added a few new ideas to shake things up, like the ability to switch costumes, each one providing Sly with different abilities to interact with his environment and solve various challenges along the way. Sly can don a Robin Hood costume to create new tightropes and reach new heights, or samurai armor to reflect enemy projectiles. In addition to playing as series mainstays Bentley and Murray, you’ll even be able to play as several of Sly’s ancestors, as well as Sly’s love interest/Interpol agent Carmelita Fox. Each character comes with their own unique abilities that allow them to solve different environmental challenges — ones Sly won’t be able to tackle on his own.

But it’s not enough. While these additions would have passed as proper enhancements for a sequel ten years ago, nowadays, it takes more than just throwing a few new abilities into a game and calling it a day. Even various touches here and there, considered charming a decade ago, come across as forced at best, to borderline racist at worst. You’ll have to suffer through hacky Italian, British, Japanese and Arabian accents, and witness of one of the worst characters ever to grace a video game: The Grizz, an evil, jive-talking bear. His rap lyrics are downright awful, and you’ll spend an entire level cringing as you’re subjected to his god-awful rhyming. It’s a stereotype of a stereotype, and it’s excruciating.

Even worse is that, despite Thieves’ lack of graphical evolution, there are some seriously baffling technical issues. The game constantly sees rather large dips in frame rate, even though the game looks like an up-rezzed PS2 game. Load times are also abysmal, usually lasting 30 seconds — or more — before loading any of the games missions. Need to hop back to the hideout to switch characters? 30 seconds in, 30 seconds out. It begins to add up quickly.

Compounded on top of this are the same sort of problems that have plagued the series since day one – frustrating combat and imprecise jumping that mar an otherwise competent platformer. Sly can hone in on a vantage point with the press of a button, and sometimes the game just won’t register that you’re close enough to it, causing some rather infuriating missed jumps. And good luck if you ever get spotted by the bad guys; enemies, especially larger ones, will eat through Sly’s health bar like candy, and the only way to combat most enemies is through beating a hasty retreat. Luckily, checkpoints are more frequent than not, and it’s possible to brute force past tricky sections with trial-and-error, but the fact that Sly’s greatest sins are still present after ten years of absence is unforgivable.

[singlepic id=10616 w=320 h=240 float=left]Despite the constant feeling of déjà vu, there’s a lot of gameplay here. The entire adventure will take around 10-15 hours to finish, never mind hunting down all of the hidden secrets and trying to chase after that ever-elusive Platinum trophy. And its hard not to fall back into Sly’s world – it’s familiar, safe, like an old blanket.

Players who purchase a new copy of Sly Cooper: Thieves in Time on PlayStation 3 will also receive a digital download of the Vita version of the game as part of Sony’s Cross-Buy promotion. Thieves in Time on the Vita is a shot-for-shot remake of the PlayStation 3 version – except with far fewer textures and level detail. There are some severe frame rate drops as well – far more than on the PlayStation 3 – especially when utilizing the first-person view; inexcusable, since the Vita is capable of producing rather high-fidelity graphics with little to no issue in other titles.

Barring these technical mishaps, the Vita version is a decent way to get your Sly fix when away from a dedicated console. Transferring saves to and from the Vita is a snap, and all progress transfers over – level completion, items found, even unlocked trophies. Controls are virtually identical, with less important abilities, like switching to first-person view or accessing the compass, relegated to the front and rear touch pads.

Also included is an augmented reality mode which allows the Vita to act as a pair of X-Ray goggles, allowing you to hunt down hidden objects while playing through the game on the console. It can be annoying to constantly hold the system up to the screen while searching for every last clue bottle or treasure, but the addition of a full-screen mode turns what could have been a useless add-on into a vital way of sniffing out every last hidden object in a level.

It’s hard to recommend the Vita version as a stand alone purchase – the technical issues hamper a game that already has its fair share of issues – but it’s a nice bonus for anyone looking to play the game when access to a console is impossible.

For a game so involved in trekking through the Cooper family past, it’s a bit ironic that Thieves in Time’s gameplay seems to be stuck there. Sly’s effervescent charm and stealth-based gameplay is just as you remember it from almost a decade ago – to a fault. Sanzaru should be commended for being able to give us another Sly Cooper game, but after waiting so long to step back into the cunning raccoon’s shoes, they should have given us a better one.