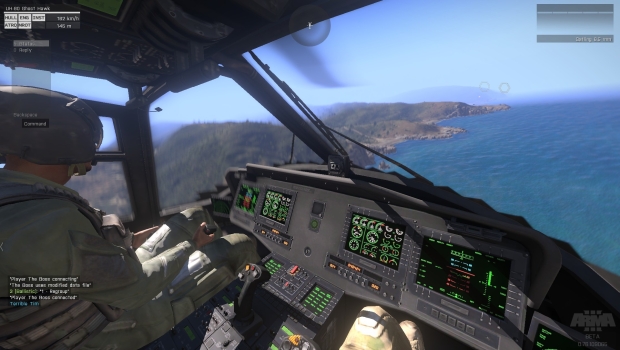 Although I’ve long been a fan of the Operation Flashpoint lineage, which bears a striking resemblance and supplied a lot of the coding talent at work on Arma, I’d never managed to delve into the franchise until now, and reviewing Arma III came to me as a welcome assignment. By the end, to my chagrin, it had overstayed that welcome. Here’s why:

Coming into this, I’ll admit I thought I was going to have a pretty fine time, as I consider myself a fairly avid war game buff, and love me some hyper-realism to boot; Arma III looked like it was going to hit all the sweet spots. It’s a game that operates on both a massive scale and a tiny one, where the map would take you all day to walk across, and your gear is inventoried down to the type of wrist watch you’re wearing. There’s no doubt that the developers at Bohemia Interactive wanted to pour as much steaming realism as possible down the warm gullets of their audience…. but to what end?

[singlepic id=15854 w=320 h=240 float=right]If you’re unfamiliar with the series, “Arma” stands for Armed Assault, and people generally think of it as the spiritual successor to Operation Flashpoint, although Bohemia Interactive wasn’t really allowed to use the name since Codemasters remains the owner of the O.F. intellectual property. It’s easy to see why the two series draw such close comparisons, given their in-depth focus on intense missions, visual excellence, and steep learning curves. The first Arma came out in 2006, and since then has garnered a large following with the sequel, Arma 2, and now the hotly anticipated third iteration (the finished version will hit the shelves on September 12th). Codemasters has continued to release Operation Flashpoint games with varying results, but it’s fair to say that the Arma creators have won over a significant number of fans who were looking to continue (and amplify) that uniquely tactical experience that early O.F. games had pioneered.

[singlepic id=15859 w=320 h=240 float=left]I got a chance to compare the Beta version to what’s being called the final release, and unfortunately they are pretty much the same. I, like many others, was excited about the prospect of diving into an illustrious single-player campaign. There has been some press surrounding the reasons why the game’s actual release seems so shaky (you can read a detailed blog post here that explains a lot of what went on during development). Here’s a tidbit from that post:

So why deliver the campaign after release? Simply put: it’s not ready. There are several factors – some of which we’ve touched on above – that have made it infeasible for us to finish our work to the level of quality we’d be happy with for this release. Why make it at all? Well, we like campaigns and we simply want to make and play them. We also know that we owe it to our community, who’ve backed us from the start. To those eagerly anticipating the experience, we sincerely apologize for the additional wait. While we would have loved to include the campaign at launch, we could not accept compromising on its quality.

Still, there’s a good amount of content for the introverted gamer: you can choose from a variety of ‘Showcases,’ which are meant to demonstrate the finest qualities of Arma III’s gameplay scenarios, and also give you a sense of the variety of multiplayer missions that you can expect to find online. Each mission usually involves a great deal of walking/swimming/flying as you attempt to make your way across the map towards some inscrutable objective while trying not to get sniped. After Showcases, you’ve got ‘Challenges,’ which provide the chance to go out on a range with an expert instructor. There, you’ll work on improving your marksmanship abilities by running and blasting your way through various obstacle courses. I think I derived the most enjoyment from this mode, actually, in spite of the fact that all of the targets were cardboard.

[singlepic id=15852 w=320 h=240 float=right]Finally, there’s the much-touted multiplayer experience, which upon first impression was a frustrating mess. First of all, I’d like to say that I take pride in my desktop, a.k.a. ICARUS-2. It’s getting a little long in the tooth, and perhaps flies too close to the sun on occasion, but I built it from scratch and it can usually run anything I throw at it, with frame rates around 90 or better even for RAM-vampires like Company of Heroes 2. That said, it pretty much choked to death on Arma III multiplayer; I was forced to edit a config file for the game in WordPad to return any semblance of normalcy to my gameplay, but even with the lag issue more or less resolved, multiplayer nevertheless seemed plagued by a host of problems that made the experience just short of excruciating.

[singlepic id=15860 w=320 h=240 float=left]Maybe I’m missing something. I did get the distinct impression that if I were actually to find a few people who were willing to work together, we might have been able to accomplish something special. Maybe we could have flown a helicopter across the map without crashing, infiltrated an enemy base, and carried out a surgical strike with a squad of riflemen to disable our opponent’s communications, which undoubtedly would have been badass and most exhilarating. In other words, I get that it’s a game where co-op reigns supreme, and if you don’t have a microphone and a working knowledge of TeamSpeak 3 then gtfo, but I felt there was a serious lack of ways to participate effectively for anyone who didn’t feel like broadcasting tongue-in-cheek commands to a squad that may or may not be paying attention. There are so many ‘maybes,’ and maybe I was just on a terrible server each time – I’m not opposed to granting the benefit of the doubt here – but I could never find anyone who seemed genuinely interested in working together, and I usually got greased before I even knew someone was shooting at me (from miles away, it seemed). Vehicles were hard to find and even harder to operate, and the alternate strategy of hiking for miles across open ground with zero cover or support rarely appealed to me.

[singlepic id=15856 w=320 h=240 float=right]Even with the fix I applied to the config files, performance continued to give me trouble in multiplayer, and I have to wonder – did the developers not take this into consideration when writing this bad boy? Based on past conversations I’ve had with other developers, I know they were supposed to, but right now it seems like you’d need the world’s beastliest rig to attain those really juicy frame rates. I know, I know – it’s Beta, and I shouldn’t get all up in arms about a game that’s technically unfinished, but come on guys, for someone who typically adores these types of games, multiplayer shouldn’t feel like a bad trip to the dentist’s. I hate to say it, but I often sat there thinking that Arma III feels like a clunky, overwrought, harrowingly difficult affair that provided almost zero moments of true enjoyment.

[singlepic id=15857 w=320 h=240 float=left]The sound design was decent, and I’ll admit I jumped once or twice when mortar shells exploded near me (as a result of my inability to properly call in fire missions). When combined with the sharp visuals, I definitely got caught up in the beauty of my environment on more than one occasion. What you’ve got in Arma III is a truly gorgeous presentation – the graphics are mouthwatering, and during the single-player scenarios I was able to crank the visual settings to 11 without any significant problems. The graphics are still pretty in multiplayer, but it’s hard to get the full effect when you have no idea what you’re doing, and your left hand keeps hovering over the escape key because there are like four other games you’d rather be playing. This is why I think a campaign, which will be included in the final version, could be a lot of fun; single-player generally gives the player a much clearer sense of direction (although, as I’ve noted, the objectives often involve just going for a very long hike), which allows you to enjoy yourself more freely. The Beta multiplayer, on the other hand, rarely failed to send my mood spiraling into oblivion until I couldn’t stand another minute. This did not feel in any way conducive to the type of playing experience I had so eagerly sought.

[singlepic id=15858 w=320 h=240 float=right]I think it’s hard to get a really true sense of the game when I wasn’t able to play the campaign, but as a preview of the final / review of the Beta, I hope this gives you an idea of what to expect when the game hits shelves on September 12th. I’ll certainly take a crack at the final version when it comes out (Beta includes it) and see if they’ve managed to improve on some of the detractors I’ve mentioned here. Until then, chances are I’ll be looking for something else to play. If you like hiking through the mountains for hours, a high-powered rifle cradled in your arms, then watching your screen go crimson as a sniper arcs three rounds into your head from like four klicks away, then this is truly the ideal game for you. This game is perfect for hardcore military sim enthusiasts, so if Uncle Jerry just got back from Afghanistan and wants to relive the glory days in real time for like 5 straight hours, get him a copy, too. Arma III clearly has some charm, and I do have a soft spot for all the realistic modeling and massively open-world dynamic, but unless this is right up your alley, I’d say you’re probably better off saving your money for Battlefield 4.