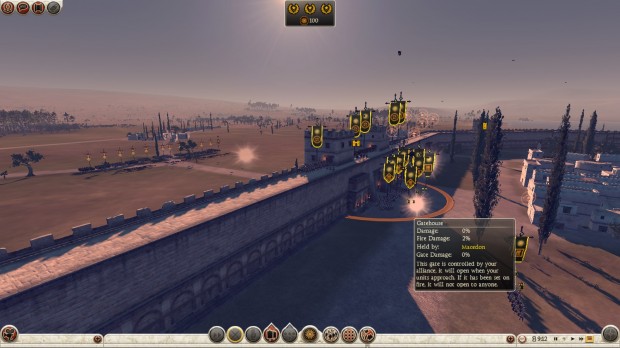 Sing in me, O muse, and through me tell of the Battle of Athens.  After my Macedonian armies captured the City of Athena from its rightful owners through might of arms, I made the crucial mistake of attempting to hold the city in the face of a hostile Spartan army. As anybody familiar with Herodotus or Thucydides will tell you, Sparta’s military prowess is nearly unmatched, and my bedraggled, war-weary sarissaphoroi were no match for them.  But soon after the battle started I realized that something strange was afoot–the Spartans had not brought any siege equipment to scale Athens’ walls. Instead they pushed several platoons toward the city gates.

I positioned my pikemen inside the gate and waited for the Spartan firebombs to bring the wooden gate crashing to the ground–but the firebombs never came.  Instead the Spartans cowered near the gate while arrows and javelins fell among them like rain. And that’s it–that was the only offensive action the AI took the entire battle.  I won because the in-game timer expired 50 minutes later. Allow me to restate that: For the better part of an hour, I sat thumbing my copy of The History of the Peloponnesian War waiting for an AI general to attack me with its superior army.

[singlepic id=16179 w=320 h=240 float=left]It seems to me that If I have to entertain myself  while “playing” a game, something has gone terribly wrong.  Though the (true) story above was the most extreme example of Total War: Rome II’s problems, the entire package is so heavily crusted with bugs and bad AI that it’s hard to find the gooey Total War goodness at its core. That juicy center is essentially unchanged from previous Total War games, mixing a turn-based strategic campaign with real time tactical combat where you can lead your armies in glorious battle. That framework remains as fun as ever–it’s just a shame that there’s so little supporting it.

Let’s get the big problem out of the way–the AI in Rome II is bad.  Really bad.  On easier difficulties, AI factions are passive to the point of absurdity–80 turns into one game and I don’t think I had an enemy army attack me more than twice.  The AI also has a habit of fielding tiny armies that can be swatted away by mere garrison troops.  That’s good news to my inner Caesar, but it basically removes any restraint on your conquering when you don’t have to worry about pacifying newly conquered lands.  Battle AI isn’t much better.  In addition to the debacle above, I noticed that AI commanders have no notion of  how important “concentration of force” is.  AI in the Total War series has never been amazing, but Rome II feels like a major step back from Napoleon and Shogun 2.[singlepic id=16180 w=320 h=240 float=right]

The Total War series has always built its reputation on visual splendor, and at first glance Rome II dazzles with its intricate city-scapes and warm, saturated colors.  On the higher graphical settings, Rome II’s units, terrain, and building look great–but that comes at a cost.  Higher settings come with some really rough performance issues, and Rome II is positively ugly if you ratchet down to low or medium settings.  Character portraits–especially spies and scouts–are universally ugly, even with the graphical sliders pushed up  On any level, you’ll have your fair share of glitches  Visual bugs in Rome II come fast and fierce, ranging from texture pop-in to multiple suns on battle maps.

If you get past the bugs and the AI, Rome II isn’t all bad. Total War’s distinct mixture of 4X empire-building and massive, cinematic RTS battles remains as engrossing as ever.  If you can get into the groove you’ll find yourself sucked into the “One More Turn” vortex, which is about all you could ask of any turn-based strategy.  That said, you’ll probably want to bring a book to keep you from falling asleep during the incredibly long time it takes the AI to run through the dozens of AI turns–you may well spend three or four minutes waiting to take a one minute turn.

[singlepic id=16177 w=320 h=240 float=left]The campaign map got a few new features that really add quite a bit.  Regions are now organized into provinces, and because you’ll get bonuses for controlling an entire province, you’ll have to think carefully about where to take your campaigning armies.  Armies and navies have a few new abilities, including one that allows you to double the distance your army can cover in a single turn and another that allows you to subsidize your units upkeep by raiding your neighbors.  These abilities add flexibility, though not all are as useful as one would hope.

If the strategic map got some improvements, the tactical RTS battles remain largely unchanged–if noticeably shorter than previous entries.  A serious fight in Shogun 2 was an hour-long affair, while in Rome II a contest involving 3000 soldiers is resolved within 10 minutes.  I’m not sure if it’s because units move more quickly, or if unit morale breaks occur faster, but it’s disappointing to be thrust back onto the campaign map before one even has the chance to admire the sun glinting off hundreds of spears.[singlepic id=16175 w=320 h=240 float=right]

At its core, Rome II is not a bad game, but it does feel horribly rushed.  Between the performance issues, the graphical bugs, and the horrendous AI it’s hard not feel a bit disappointed.  Creative Assembly has a record of putting out bug fixes and patches on a regular basis, so Rome II will get better–but there’s no way of knowing how much.