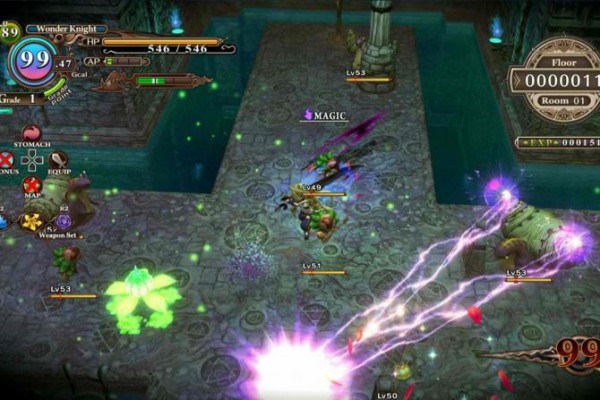 It’s been a couple years since I first took on the role of the torch-headed familiar, Hundred Knight, and clumsily (borderline inaudibly) swore my allegiance to the excitable swamp witch Metallia, beginning my lonesome quest to free her from her self-described undeserved captivity. It was an ironically cheerful story of vengeance, ancient betrayals, and an occasionally intense exploration of a villain’s quest for justice.

Altogether it was a great deal of fun, with just a few tedious snags holding it back.

Now, two years and a whole new console later, Witch and the Hundred Knight is back with the Revival Edition, updated and ready to meet a potentially new crowd of gamers. While this shouldn’t exactly be a surprise considering how many Japanese ports the Sony consoles are particularly filled with, what might take players off guard is how much Witch and the Hundred Knight has improved with age; and not in the ways you would expect.

The art and level design for Witch and the Hundred Knight is the kind that revives memories of the old Super Nintendo action RPG heydays. It’s hard to wander through these lively maps without thinking about classics like Secret of Mana.

So let’s get a few things straight right off the bat. Witch and the Hundred Knight is largely a straight up port of the original title I reviewed. The graphics have been slightly improved to take advantage of the PS4’s mightier specs, the controls are tight and don’t suffer from the mis-calibrations we sometimes encounter in platform transitions, and the music and sound has been preserved wonderfully. With the exception of the Tower of Illusion (which we’ll get too a little later), this is very much the same game that we got to enjoy back in 2013.

However, unlike many ports, I found that Witch and the Hundred Knight: Revival Edition’s similarities to the original to be one of its best components, and here’s why…

The thing about experiencing a re-release of a game you enjoyed, had recommended to you, or even just heard good things about is how it weathered its transition to the here and now. Not just in its playability, but in its concept. Like a book addressing a controversial subject, sometimes creations that press certain limits feel those limits push back whilst facing the test of time. They change from what they were, sometimes away from what made them memorable or great, into something we expect or, even worse, something we can more easily accept.

Japanese games are uniquely vulnerable to these potentially damaging re-interpretations, because they start all their journeys from their homeland being pulled apart and re-assembled for Western localization. In the case of updated ports, they are typically re-interpreted from their original localized interpretations, which themselves were diluted from whatever their original concepts were.

It is my hope that this updated release of Witch and the Hundred Knight, while only a slight improvement over the original, really helps lift these wonderful characters and their story to great fame. The game is truly fun, immersive, and fearless in its own way.

In the case of Witch and the Hundred Knight, despite its colorful atmosphere, humor, and occasionally unassuming music, it is an extremely dark story. You are playing the part of an evil Witch’s tool of revenge, her blunt (and sometimes sharp, and other times stabby) instrument of recompense, anger and hatred. The parties, people, and creatures you are crushing underfoot are very often the heroes of a more conventional tale, and that is simply not a story we regularly get to see.

The fact that this daring bit of storytelling has been preserved across its update is something to be celebrated, and in combination to the more tangible upgrades it has received makes the final product even better.

This brings us back around to the aforementioned Tower of Illusion dungeon that has been added to the Revival Edition.

The Tower of Illusion is a series of challenge maps that you can enter by putting a weapon of your choosing on the line for potential sacrifice. The more powerful the weapon the more powerful the foes you’ll face and greater rewards. While in this dungeon you’ll have the ability to summon the Witch herself, Metallia, and play as her, wielding her awesome might to crush your opponents.

In order to get the most out of the Tower of Illusion you REALLY have to be in love with the battle mechanics of this title. For a game who found some of its largest criticism with how repetitive the fighting could be, you have to respect the developers confidence for packing even more in.

This feature adds a little something extra to further flesh out a complex but otherwise largely straightforward game. However, considering the basic design of Witch and the Hundred Knight involves a great deal of backtracking, grinding, inventory micromanagement, and map hopping, adding another way to do all those things is an objectively sideways enhancement. Depending on how much you enjoy the combat this might really be your cup of tea, but otherwise it doesn’t really add much more value than your average DLC or pre-order bonuses.

Free of any other criticism, we can get down to the real value of the Witch and the Hundred Knight: Revival Edition, which is a chance to own a great, slightly more niche, action JRPG on PlayStation 4, and pay quite a bit less than the original was when it came out but with more content. If you’re a fan of dark storytelling and really want to experience what it’s like to play a fun game with a number of unpredictable twists, this is a great opportunity to add a great title to your collection on the cheaper side of the gaming hobby.

Not to mention the Hundred Knight, no matter how many villager homes he dominates or good witches he helps murder, is just so damn adorable!

Witch and the Hundred Knight: Revival Edition is a new opportunity to own a modern JRPG classic. While its new features are largely standard fare, its real value is its preservation of what made the original great without being diluted to fit the taste of a different audience. If you were a fan of the original but sacrificed it for a more current platform, or just want a chance to own a title that snuck past you the last console generation, this a great chance to bolster your collection and indulge in a truly unique experience.

I've been a huge fan and critic of games and movies ever since I had a voice to speak about them. I love power and influence of great storytelling, interactive and otherwise, and now want to be more than just a consumer. My biggest strength in this regard? Almost every time, I'm fair all the time.
Related Articles: Witch and the Hundred Knight Revival Edition
Share
Tweet
Share
Submit