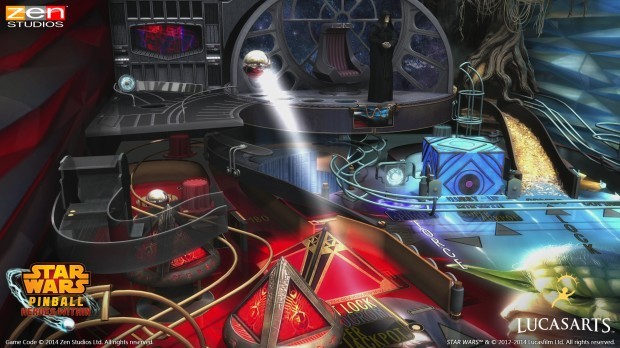 Star Wars Pinball: Heroes Within consists of four new tables. One is dedicated to the galaxy’s favorite scoundrel, Han Solo, one focuses on the droids of Star Wars, another is called Star Wars Episode IV: A New Hope, and the final table is called Masters of The Force.

The Han Solo table seems to try to emulate the Mos Eisley Cantina, and prominently displays the iconic Millennium Falcon. The objective is to complete objectives related to Han Solo’s actions in the Trilogy, and get as high a score as possibly while doing so. The Millennium Falcon opens up to reveal a small pinball mini-game during certain points, and players will spend a lot of time trying to fix the Falcon in general. There is also a pretty cool feature where you have to enter a “blaster duel” with notorious patrons of the cantina, but I just ended up getting shot a lot.

The droid-themed Star Wars table is definitely the most disappointing of the bunch. It features C-3PO and R2-D2 and is reminiscence of the Jawa sandcrawler from A New Hope. I like C-3PO as much as the next nerd, but the voice actor attempting to recreate his lines was just too off for me, plus the board has a few issues. For starters, anytime the ball ended up on the left side of the board, I lost. There’s a terrible drain lane there that I just couldn’t seem to avoid, so I never lasted longer than a few minutes without losing a ball. Most of the ramps on the board require so much force to crawl up that I found the ball rolling down the ramp more than I got it to reach the top. There are some high points as well, like trying to escape the Jawas and helping to free fellow captured droids, but I didn’t end up playing this table for too long.

The Star Wars Episode IV: A New Hope table is a pinball table after my own heart. Playing it immediately made me want to watch the film it was inspired by (which I am doing at the time of this writing), and it is one of the more sophisticated boards to come out of Zen Studios. The table Features various elements of A New Hope and allows players to play through 7 scenes from the film in sequential order, ending in the destruction of the Death Star. All of the quotes and scenes are done very well, and the minigames are some of the best I have played (the Death Star trench run in particular).

The final table is called Masters of the Force, and is divided down the middle into a dark side half and a light side half. This is a contender for one of the best tables, just because there is a lot for the player to do. It’s also the first time I’ve seen an alternate ending of sorts in a pinball table. The player can decide (or accidentally choose one, as was usually the case with me) to do the bidding of Yoda or Darth Sidious, and different minigames will unlock depending on your choice. I helped Qui-Gon Jinn and Obi-wan Kenobi fight Darth Maul for about five uninterrupted minutes, and unlocked the dark secrets of a Sith Holocron, and am still not bored of this table.

If you are a fan of pinball or Star Wars or both—buy this DLC. It’s clear that the people at Zen Studios are experts at both, and $10 is a low price to pay for a few entertaining hours of bumper-slapping.