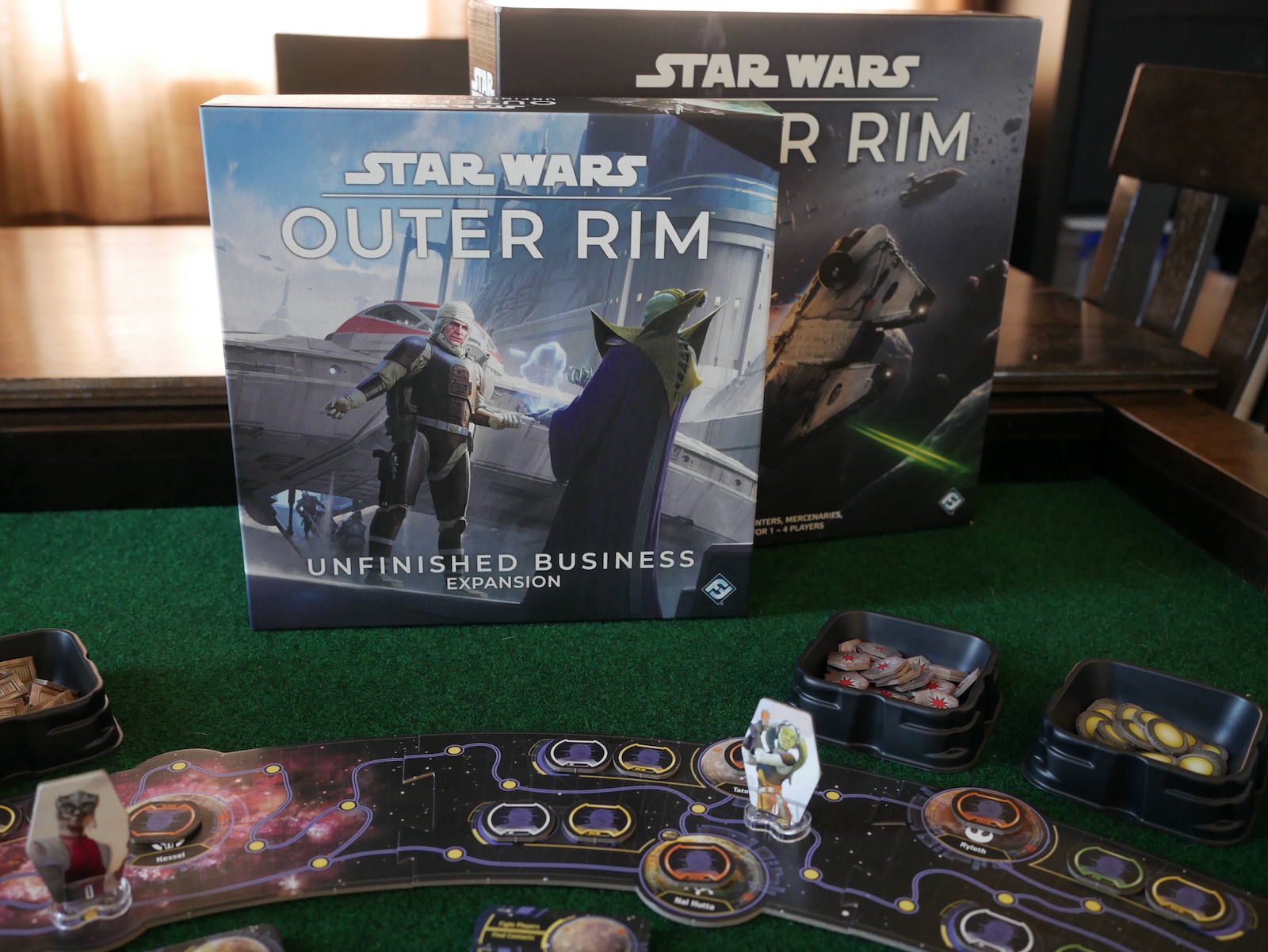 That Fantasy Flight Games would eventually come out with an expansion to the bounty hunter themed Star Wars: Outer Rim was a fairly forgone conclusion. Besides there being several more characters from the comics, cartoons, and live action series offerings on Disney+ that were definitely a perfect fit, the most obvious indicator was the numerical gaps in the event deck. In my review of the core game, I mused that a Mandalorian themed expansion would not only be perfect but timely, and with Unfinished Business my wish was kind of granted? In fact the roster of characters/ships not only includes Mando and Razorclaw, but several characters from Star Wars: Rebels and the comics as well, including fan favorites Black Krrsantan and Hondo Ohnaka. 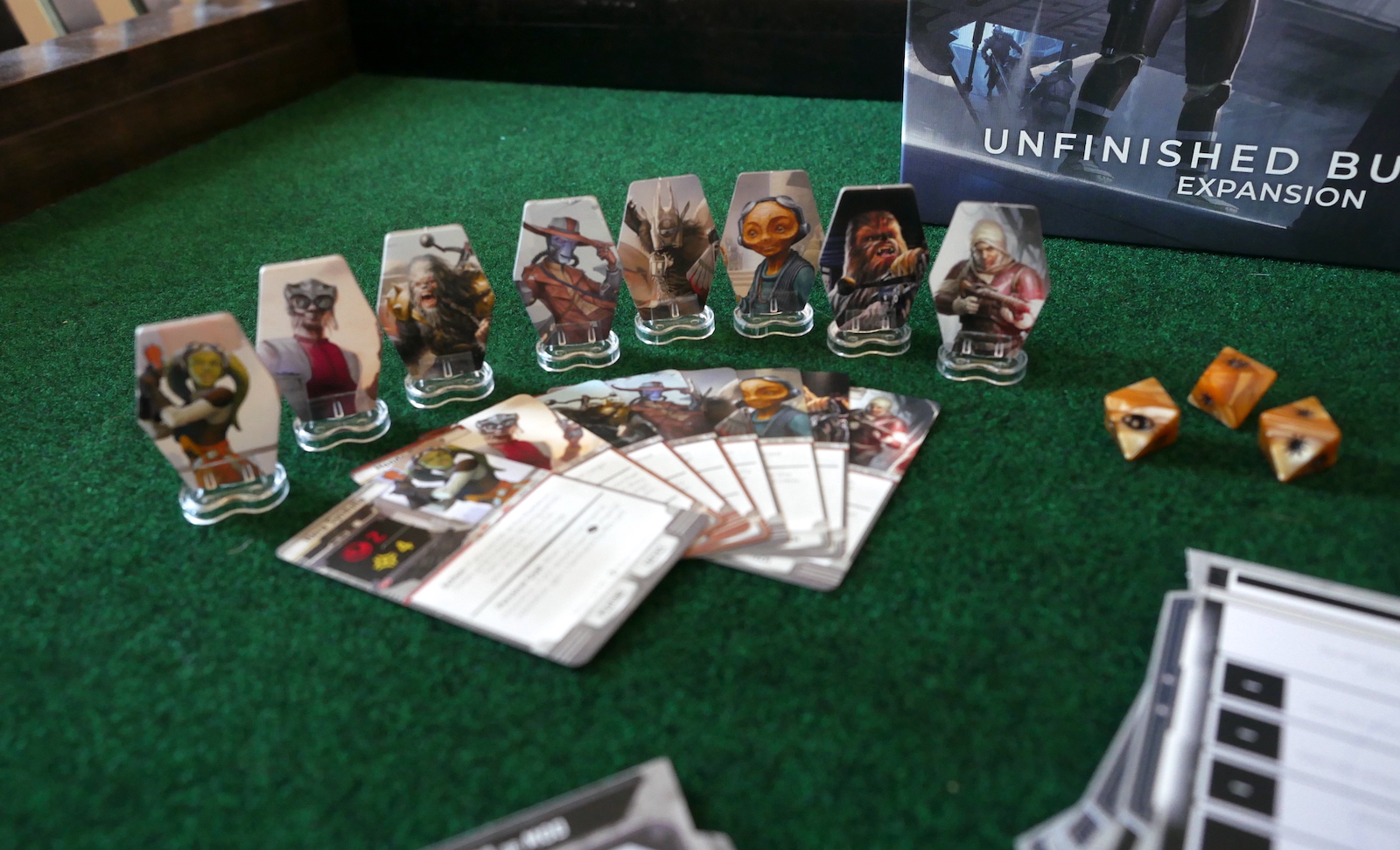 Now, if Unfinished Business just came with more of the same kind of stuff- characters, ships, items, bounties, etc.- I’d be ending this review right now and pointing furiously at my review of the core game, where my biggest complaint was that all of the theme-rich parts of the game were largely pointless and even distracting if you simply played to win. Playing as The Mandolorian, buying and upgrading his Razor Crest, and picking up Grogu as a crew member is great, don’t get me wrong, but it doesn’t do much to sway my previous opinion. Luckily, there’s more in this little box than that.

You can probably boil down my previous review to this one sentence I now quote:

“Don’t get me wrong, Star Wars Outer Rim is very fun, especially with a full complement of 4 players, I just wish it gave more incentive to savor the more interesting and theme-rich parts of the game’s design.”

Unfinished Business gives us that incentive in one of the best ‘expansion-as-a-patch’ additions I’ve ever seen in all my years of tabletop gaming: Ambitions. 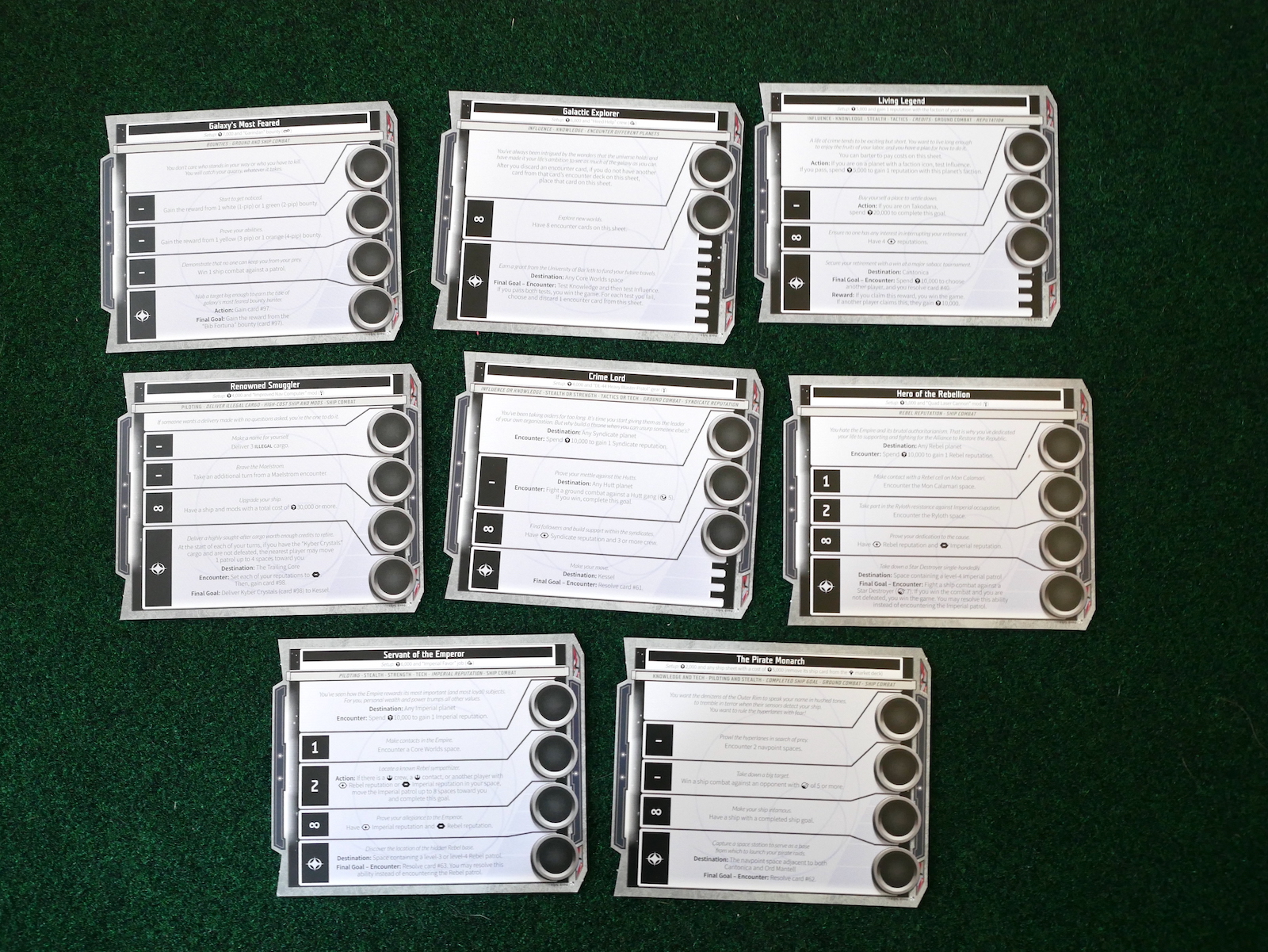 Eight little cards that slot in on the right of your player board, Ambitions provide new setup instructions, player abilities, and add specific tasks and requirements, three of which can be completed in any order, while the fourth requires the previous three to be completed as well as an agreed upon amount of fame (which is voted on by players before starting. This is a ‘valve’ that helps determine how long the game lasts). Ambitions basically add a bit more asymmetry to Outer Rim by adding roles to each player’s character, roles that are steeped in theme: The ‘Hero of the Rebellion’ must make contact with a rebel cell on Mon Calamari (planetary encounter) as one task, the ‘Renowned Smuggler’ must brave the Maelstrom in the Kessel Run twice as one of theirs. These new tasks and how they are completed provide the missing link to Outer Rim that transform the game from a repetitive fame horse-race that punishes you for loving the thematic elements, to an absolute blast that exults in the theme and rearranges the various mechanics of the game into something more vital. Framed as an optional rule, I posit that Ambitions be required for every play, it certainly is on my table from here on. 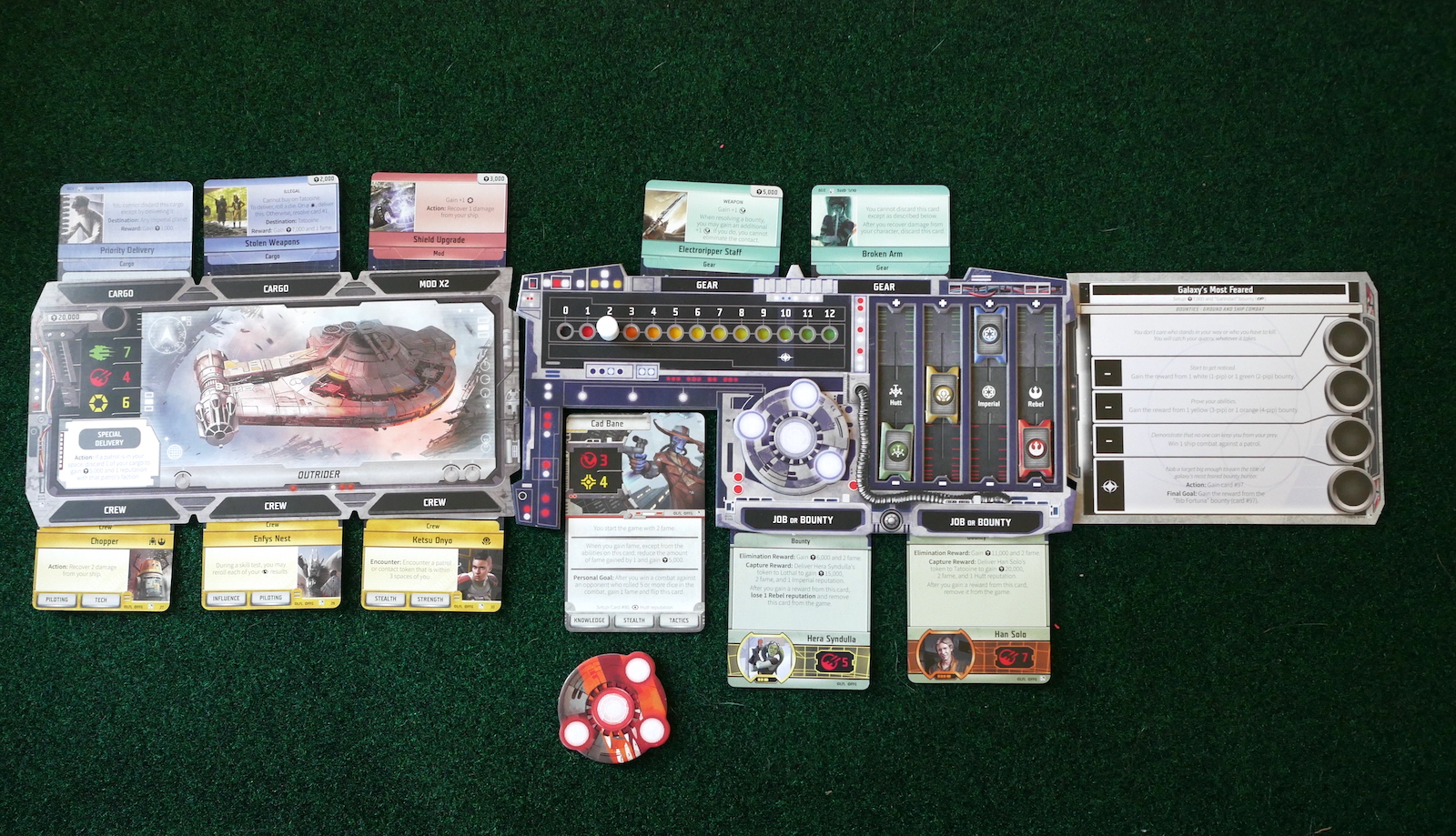 The other two major add-ons in the box are Favors and new single-player rules and AI decks. Favors are fun, but often get lost in the shuffle in the midst of a mountain of components and cards. At the beginning, each player receives a debt token that matches their tableau board, a ‘favor’, which they can grant to another player, which grants a one-time use of one of four abilities: borrow a skill for a single skill-check, roll an additional die in ground or space combat, grant a positive faction reputation point for the duration of a turn, and add 1 to movement. Favors can be bought for immediate use or a debt token is provided for a favor to be granted in the future. There’s some fun to be had here, player interaction is sparse in the core game, and bargaining for favors can get downright comical, especially alongside the new pvp-ish rules around seeking bounties on other player characters.

The new AI deck significantly fleshes out the single player game, allowing for bounty hunters to be AI opponents, and specific cards for each character provide more connective tissue to the theme. Notably, with multiple AI decks you can now have multiple AI characters, but the best new addition to the game (ambitions) is brushed aside and the AI characters simply embark on the race to ten fame. I’m just not convinced it’s worth the set-up time (which is significant). 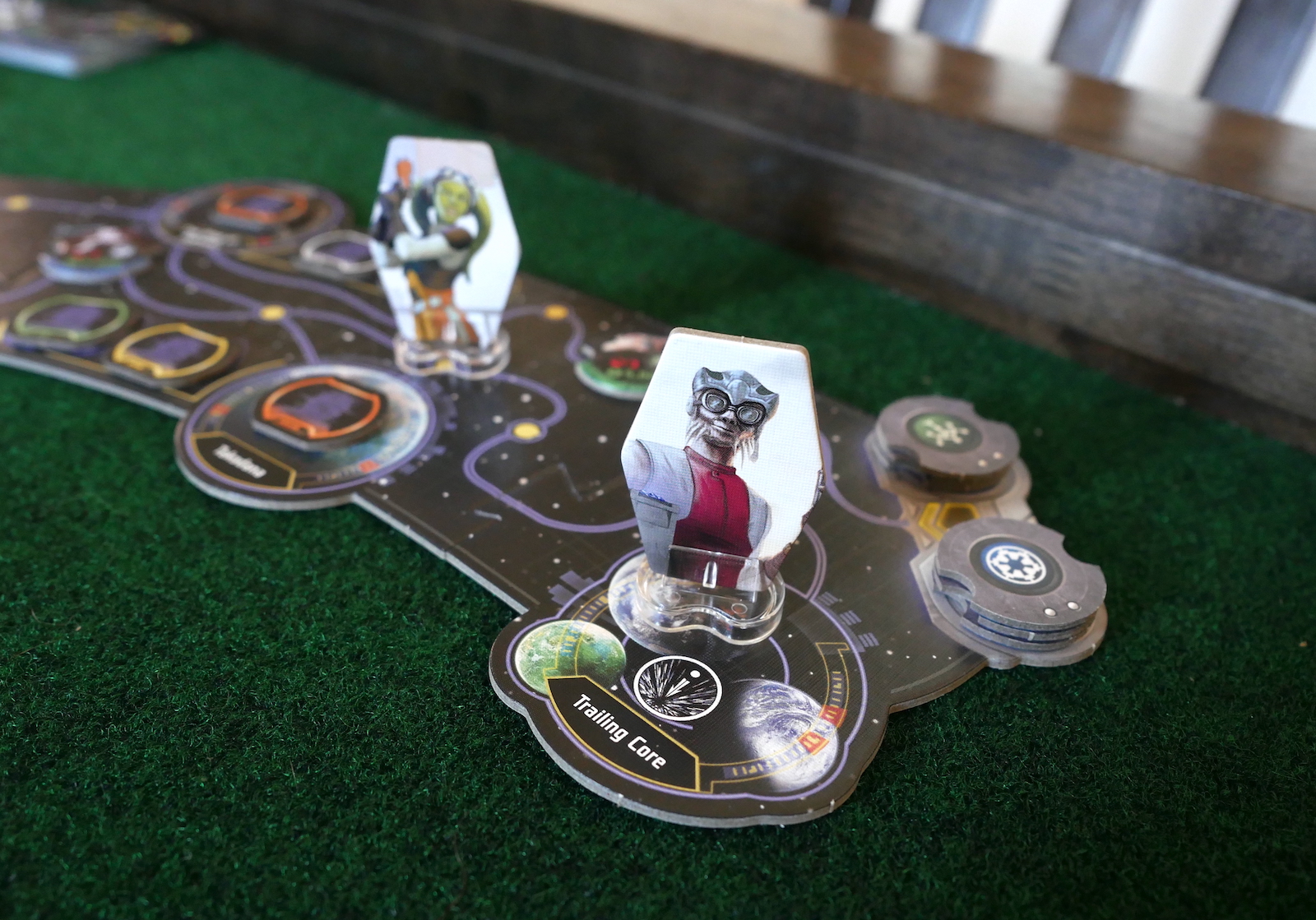 Also, I would be remiss if I didn’t also mention the Core Planets, represented by replacement endcaps on either side of the board arc. The Spinward Core and the Trailing Core amount to two very tough encounter spaces, but the real addition here is the ability to move ‘across the core’, an action that takes an entire turn and an encounter that will incur a heavy cost. Moving across the core allows players to go from one end of the arc to another, adding considerable movement flexibility on the board. A very worthy addition. 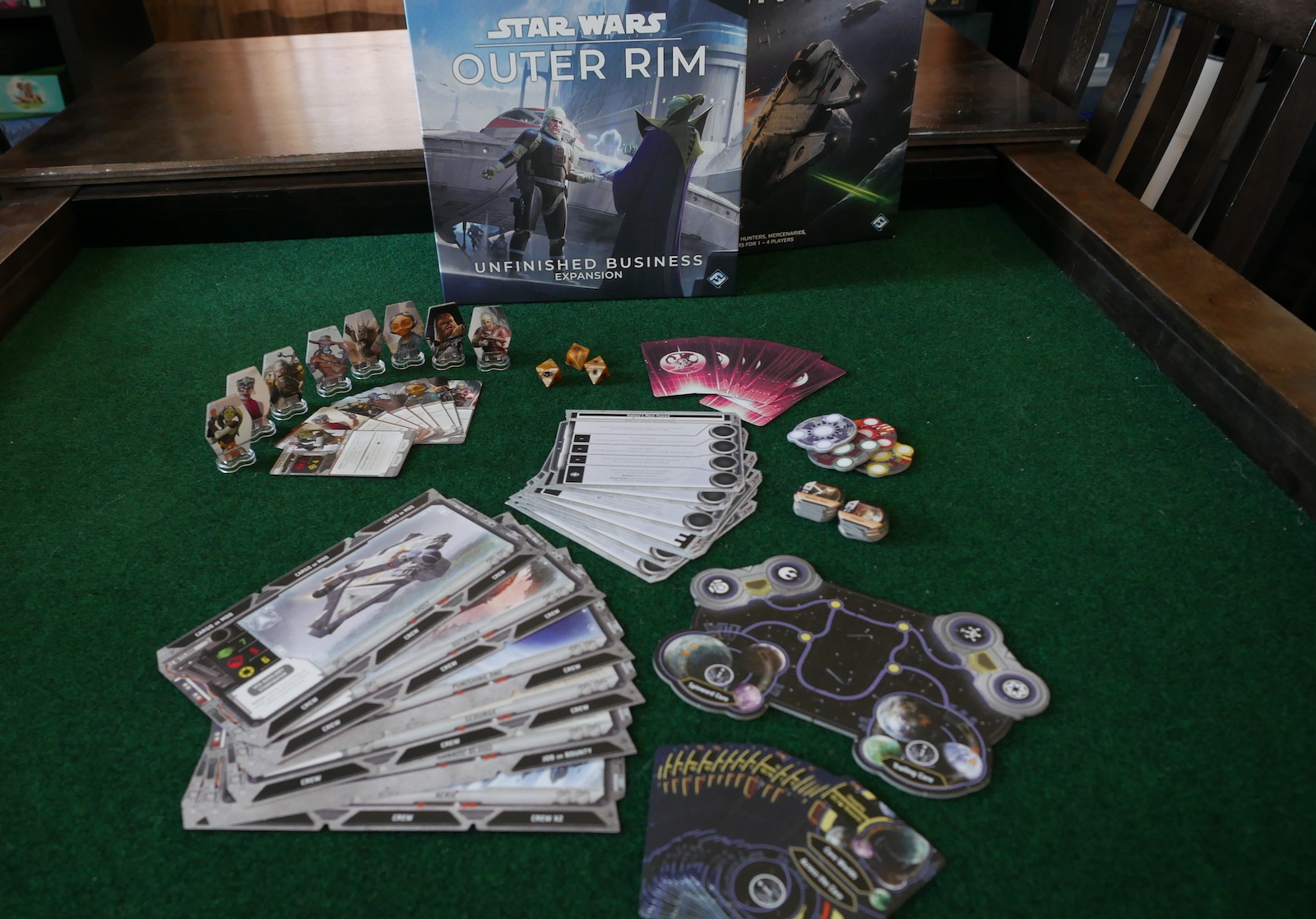 Unfinished Business is an apt title for an expansion that turns a game that felt like it could be so much better into a game that I now get excited about bringing to the table. Yes, it’s still something of a table hog with a brutal setup and takedown, but the Ambition cards make the theme and gameplay really sing in a way the base game didn't.

Mike Dunn is the old man of Gaming Trend, having cut his teeth on Atari consoles and First Edition Advanced Dungeons & Dragons back in the day. His involvement with Gaming Trend dates back to 2003, and he’s done everything from design and code to writing and managing. Now he has come full circle, with a rekindled passion for tabletop gaming and a recent debut as Dungeon Master (nearly forty years after he purchased the original DMG).
Related Articles: Star Wars: Outer Rim Unfinished Business, Tabletop
Share
Tweet
Share
Submit