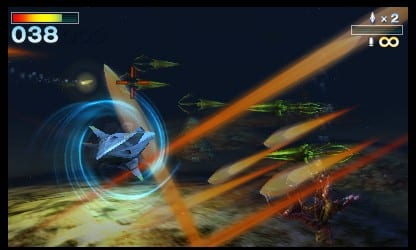 When I worked for a major retailer while in their electronics department we had a Super Nintendo display with two controllers. Most of the time Super Mario World and Super Mario Kart were the games that were in there the longest. One day the game was switched out to Star Fox. The game touted a new Super FX chip inside the cartridge that allowed better 3D graphic processing. Star Fox also cost more because of that chip, but that didn’t stop the sales of the game.  It sold well enough to become a Nintendo franchise character ranking up there with Mario, Samus, and Kirby.

Since then Fox McCloud and his Arwing squadron have had their share of adventures and mishaps. A sequel for the SNES was cancelled by Nintendo, even though the game had been completed. Star Fox 64 was released for the Nintendo 64 and featured Fox in his Arwing again. Star Fox Adventures had Fox leaving his Arwing and setting out throughout the universe on foot. Star Fox Assault kept Fox in his Arwing and brought a more traditional Star Fox experience to the Gamecube. Star Fox Command was released for the Nintendo DS and it made you control Fox through use of the stylus. Now Nintendo has brought back Fox to a portable system with Star Fox 64 3D.

tar Fox 64 3D is another rail shooter similar to the traditional Star Fox games. You play as Fox McCloud flying through most of the game in an Arwing fighter. Throughout the game your faithful companions Falco Lombardi, Slippy Toad, and Peppy Hare are there to give advice, find alternate routes, and examine the shielding for bosses. Sometimes ROB 64 will give an update on the status of your mission or send out supplies. Fox’s squadron is chasing after Andross, who has been exiled to the planet Venom. The Star Fox team travels through the Lylat system, battling mercenaries and other enemies through planets and asteroid belts to reach Venom and destroy Andross once and for all.

Star Fox 64 3D employs both screens at the same time. The top screen is used for showing off the action with the bottom screen used to show the status of your Arwing and any incoming messages from the other ships. I never played the original Nintendo 64 version, but the graphics do look good for a portable game. The action never seemed to slow down, and the lighting effects for boosts, somersaults, and U-turns looked great. The 3D made a difference with how far away the enemies, but it could get a bit disorientating while flying around structures, especially when they obstructed your view of the Arwing.

The voices for Star Fox 64 3D are a bit surprising. I really didn’t expect Slippy Toad to sound so much like a kid. The other characters are a bit rough around the edges, but they do their job well. It would have been nice for them to have a little more emotion during some of the more harrowing scenes. The phrases used can get awfully repetitious quickly. Their mouths also don’t move with the text, they just move randomly. It’s unexpected to see that in modern games like this. You do get feedback for every obstacle you hit with your ship, enemy that goes down from your lasers, or power-up that your run over.

Star Fox 64 3D can be controlled using the regular controls, which is the way I would recommend. Several control options are included, such as being able to invert the Y-axis and changing which buttons brake and launch bombs. Using the up and down on the D-pad performs somersaults and U-turns, while they can also be done with up and down on the circle pad along with the boost key. You can also do barrel rolls by hitting the L or R button twice. This helps repel enemy fire. The other control method is with the gyro controls. As you move the 3DS, the Arwing will move in that direction. The problem with this mode is that as you move the 3DS, the screen moves as well. You can use the regular controls while using the controls, but sometimes your movement of the 3DS can be the opposite of which way you want to go. You definitely don’t want to use the 3D capabilities while playing this game, you will get double vision on your screen.

There aren’t specific difficulty levels in Star Fox 64 3D. Instead, how you do within a level determines the path you take towards Venom. If you complete the hidden task in the level or take the correct path, you’ll see “Mission Accomplished.” If you complete the level but don’t perform the particular task, then you’ll see “Mission Complete” instead. At least you can go back and retry levels so that you can get the other levels and try all of the different paths.

The multiplayer options seem to be a last minute add-on that could have used some fleshing out. You can battle with three friends in an arena-style deathmatch, and you can set the ending conditions to be a certain number of points or after a certain number of minutes. You can use your own face as your Arwing avatar using the built-in camera on the 3DS, but since the multiplayer is limited to local play by downloading data from a single cartridge, it seems rather odd since your friends are there with you.  Not having online multiplayer is a truly missed opportunity to the longevity for the game.

I never played Star Fox 64 so I was happy to play the 3DS version. I can imagine that those who enjoyed the original will enjoy the updated graphics and the portability of the game, if they haven’t already downloaded the original game off of the Virtual Console on the Wii. For those that haven’t played it, it will make a nice addition to the 3DS library. Hopefully we’ll see more adventures of Fox McCloud on the system in an original adventure.