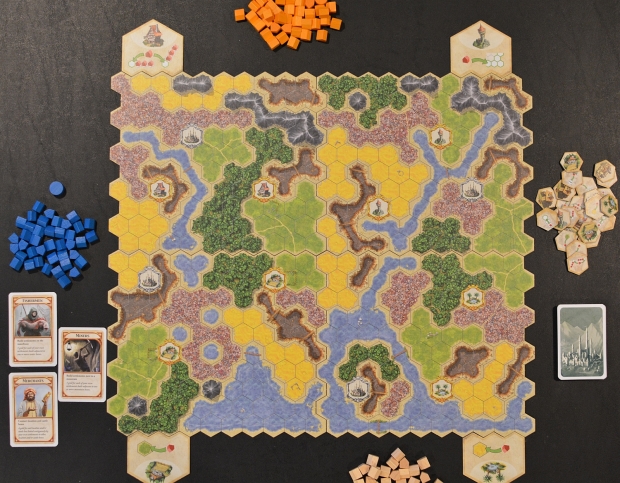 Game awards tend to be an exercise in pretentious favoritism, where the flashier products of the big names tend to get the most visibility like Hasbro/WOTC or Hans im Gluck. For whatever reason, eye candy is a big factor in what makes a game of the year nominee. This makes it difficult for startups to compete, regardless of the more important gameplay merits. And when the stakes are as high as they are in the gaming industry, where being named game of the year can increase sales 100 or even 1000-fold (!), political or casual determinations can kill the small but otherwise worthy publisher. The 2012 award went to Kingdom Builder published by Queen Games, a consistent contributor of Spiel des Jahres nominees.

The 2012 Spiel des Jahres is without question a polished and pretty game, with sturdy map sections and lots of little painted settlements that are easy to manipulate for even the schnitzel-fingered. Germans have a reputation to keep, dating back to the third time they lost control of France, of disseminating quality, so not just any print-and-play dungeon crawl will make the grade. But beyond the bright colors and carefully-cut hexagons, what makes Kingdom Builder worthy of such an award? And who the heck is making these decisions?

In no particular order, nominees are evaluated on:

The most important criteria really should be Gameplay or Game Concept. So why was Kingdom Builder the most original, playable and appealing to the judges? There’s only one way to find out.

Finding the Spiel des Jahres website was easy but my German is a little non-existent. Luckily, Douglas Adams invented the Babel fish (God DOES exist!) and then Alta Vista (huh?) smartly acquired and made popular the first Internet universal translator. Less Luckily, one language does not precisely translate into any other. The direct translations may still be informative, but a translation of the translation is required. Here we go.

The first judge on the site is Udo B. First impression: Udo looks the gamer type. Does everyone in Germany wear those wire-rim glasses? From his bio, we know that, “The passion was fueled mainly by two older cousins at a young age; an important free lesson was to be able to lose.” So he was the youngest and weakest of a childhood triumvirate. Following these early sessions of humiliation, Udo carried “The passion” to University, where he, “Finally succumbed playing while studying. Despite best intentions the way magically led repeatedly into the local game shop, while actually seminar or library were to estimate.” A-ha! So he has ADD (and probably AD&D), and was a lousy student, though he blames this on “magic.” Udo then drowned his shame in a sea of fantasy fueled by niche games and dirty magazines: “Blessed spot two discoveries: Games Beyond the mainstream and fantasy magazines! But panic in the face of the huge offer: There was much yes so frightening to catch up! And 19 years have passed…”

Udo finally found a forum to express a lifetime of fermented anger. “Acquaintance with a game critic 1997 encouraged, to try it myself even with criticisms.” His selection as a judge must be a crowning achievement. Long years the tortured jester, he is now the king-maker. That Kingdom Builder would present itself for his judgment seems serendipitous.

Next is Karsten G. His bio is revealing: “Karsten Large wrote after the completed degree in mathematics in Oldenburg as a volunteer and then as an editor for the Nienburg daily newspaper “The Rake” about the Lokalsport.” He likes sports, a lot. Maybe too much, as it turns out: “His passion for gambling to rub off more and more on the family. Especially his little son…” Karston Large (probably his Gamblers Anonymous name) has infected his own children with the zeal to gamble. But it’s not his fault. “Karsten Large even grew up with classics and played Rummy with the grandparents, Canasta with the parents, with the brother as well as Risk and Stratego chess with the cousins.” The long tradition of gambling addiction in his family is troubling. Apparently there’s no sport or game Karsten won’t put money on. I suspect he was hooked to the concept when he learned the object of Kingdom Builder is to win the most “Gold.”

Finally there’s Guido H. Apparently a gypsy, his father provided for the family by gambling on chess. “The father then sought a chess opponent, brought back the pocket money for tens of thousands and had to experience serious resistance in the Rummy was getting into the scene.” The “Rummy” could refer to the card game or his father’s alcoholism, we cannot be certain, but the next sentence from Guido’s bio offers a clue: “The journalistic starter kit took Hamdan at the Südkurier Villingen and radio Neckar Castle, but then succumbed to the sweet Lockrufen of Lake Constance.” Ahh, the scourge of many men – sweet Lockrufen! Guido’s lack of willpower would continue to plague him. “During his studies at the University of Konstanz he sank due to game-avid WG and lax study morality really in game worlds.” Our unlikely judge would land on his feet, turning his personal liabilities into strengths: “Since early 2010 permanent editor in Chief and brave lone of the German edition of Tric Trac: a web page with commented news and passionate reviews.” Did Kingdom Builder stir the nostalgia of formative years spent lurking between hollows in the Black Forest? Probably so.

There’s a clear pattern among the Spiel des Jahres judges: lifetimes of personal failures and addiction tendencies which ultimately caused them to seek fantasy over reality, and then write about it. The result: Kingdom Builder was the obvious choice for Game of the Year! Not so obvious, you say? Ok, here’s how Kingdom Builder works:

Players randomly draw four sections of the game board and place them together. This is the same dynamic as Settlers of Catan or Last Night on Earth, and induces variability into game strategy. Each board segment has a unique layout of terrain hexes and contains a special action type that can be acquired during the game. Similarly, victory conditions vary from game to game. Three Kingdom Builder cards are drawn from a deck, each detailing a specific scoring method. The combination of random board creation and random victory conditions are the heart of what makes this game both playable and fun.

Players take turns drawing terrain cards and placing settlements on the corresponding terrain hexes on the board. The most important rule of the game is that, when possible, players must always place new settlements adjacent to existing settlements they own. Careful planning is necessary to take advantage of the terrain to maximize scoring opportunities. For example, with the “Discoverers” Kingdom Builder card, players score one gold for each horizontal line on which they have placed at least one settlement. Placing along a vertical line that extends from the north side of the board to the south gives the most possible gold/victory points, but due to the adjacent rule and the random terrain draw, this is not an easy thing to do. Another scoring condition is the “Miners,” where players score for every settlement placed adjacent to a mountain hex. The combination of these Kingdom Builder cards may not be complimentary, forcing players to choose where to place to maximize victory points.

Placing settlements adjacent to location hexes gives the player special actions corresponding to the unique location type of that board segment. Special actions are limited – each board segment has only 2-4 tiles to pick up. With each subsequent turn its possible for the same player to pick up multiple tiles of the same special action type. These special actions can then be used to take multiple extra placement actions according to the rules of that tile. Two basic types of tiles allow players to either place additional new settlements or to move existing settlements. For example, the “Farm” lets a player place one new settlement on a grass hex, building adjacent if possible. The “Harbor” lets a player move one existing settlement onto a water hex. This is the only method that players can build on water. These special actions are critical to winning, as the more settlements a player can place increases his scoring opportunities. This may sound complicated but in general this is a very simple game to learn how to play.

The recommended age group for Kingdom Builder is 8 and up. I think that’s appropriate. This is an outstanding game for younger players. Not so much for more experienced gamers. My group got bored with it after a while. We finished a game but did not choose to play again. We may have appreciated its elegant simplicity more if we’d played it after Mage Knight instead of before. I strongly recommend Kingdom Builder for young people or as a lighter strategy game in a mixed group. It does not in any way even remotely resemble Dominion, which is great and for which I applaud Mr. Vaccarino.

The Spiel des Jahres judges have a history of awarding games for simplicity and playability. Kingdom Builder scores high marks and is a worthy choice.

This is an outstanding game for younger players. Not so much for more experienced gamers. I strongly recommend Kingdom Builder for young people or as a lighter strategy game in a mixed group. The Spiel des Jahres judges have a history of awarding games for elegant simplicity and playability. Kingdom Builder is a worthy choice.