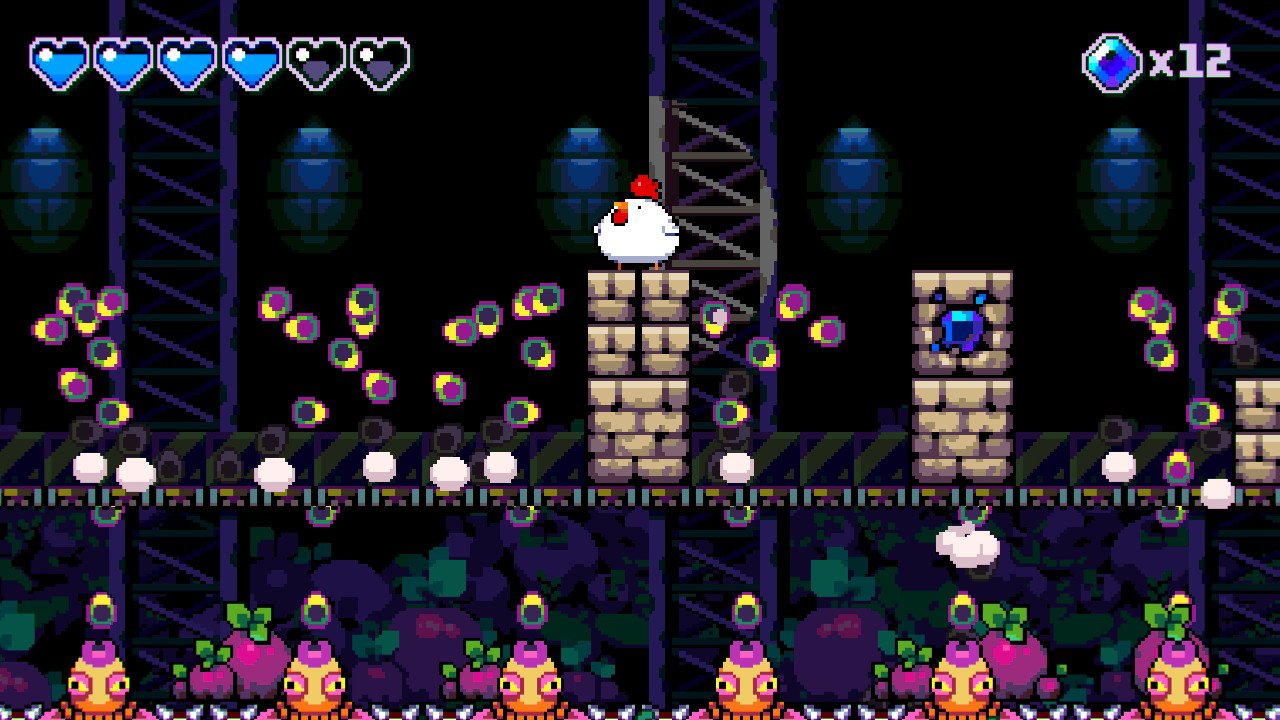 I love the Bomberman franchise, mainly because of the fact that your abilities are a blessing and a curse. Sure, you’ll need your bombs to clear rooms full of baddies, but they can also be your undoing in a split-second decision. The series is both parts puzzle and action, and I think that’s the main inspiration for Nitrome’s Bomb Chicken. While a little on the short side, the game does a great job with its puzzle-platforming gameplay and gorgeous pixel art.

Bomb Chicken puts you in control of a chicken imbued with a strange power after a freak accident gives it the ability to lay bombs in lieu of eggs. This is your sole ability, and you must use it to traverse through the game’s 29 different levels. You’ll traverse three worlds trying to uncover the mystery of BFC, the corporation with the mysterious blue goo in which your chicken was immersed. It’s not the deepest plot in the books, but it does the job well.

While basically every face button lays a bomb, you can also stack bombs in order to gain height, which is necessary since you can’t jump. After a few seconds, bombs explode (as they are wont to do), and any connecting bombs will explode in a chain reaction. It’s up to you to stack them in a way that won’t destroy your chicken, as it will die in one hit with most everything in the environment. Luckily, you can obtain more lives by grabbing crystals scattered around the levels, and deposit them on the altar of a divine chicken statue, which eggs you on into finding a way out, though nothing is quite as it seems here. (Also, pun intended.)

The main bomb mechanic is surprisingly versatile. Whether they’re used to demolish some boxes, gain some vertical movement, or defend the chicken from enemies, the bombs are simply more than a one-trick pony. I was amazed at how Nitrome used this mechanic and stretched it out to fit the game without it running too stale. Some later levels will be punishing with timing and placement of bombs, but the puzzles are rather ingenious once you get the hang of the explosive nature of gameplay.

In terms of presentation, The chicken itself is adorable, and its goofy movements in relation to the dreary environment put a smile on my face every time I booted up the game. Much like Snake Pass’s Noodle, the chicken is a great character to control, and the pixel art moves fluidly and without framerate issues, docked or undocked. The boss battles, while few in number, are a highlight to Bomb Chicken. There are only three of them in the game, but they are rather smart in terms of mechanic use, and I was excited to dispatch them with my bombing intelligence.

Did somebody order spicy wings?

While the main mechanic was utilized quite well, the environment and enemies feel a little underused. The game’s 29 levels move a little too quickly, with new enemies and gimmicks introduced and forgotten rather quickly. You might get a couple levels with the blue goo that will cause a deadly ripple when a bomb explodes, or plant enemies that sprout indefinitely, causing you to pay attention to where those seeds might grow, but other than that, they’re gone in a flash.

Don’t look down, or you’re clucked.

In fact, it’s rather disappointing that the game is over relatively soon, clocking in at around two hours. It could have easily been double the length with no indication of staleness or repetition. It’s also a shame that the game offers no replay value beyond the initial playthrough, as there’s not much motivation to try and collect all of the crystals you may have missed. There’s no real progression or things to explore after the secret areas within levels (which award more crystals, which means more lives), which is rather disappointing. It doesn’t allow the innovative aspects of Bomb Chicken to breathe, and overall makes the game a tad rushed. I wanted to solve more of the game’s puzzling levels, but I felt a bit unsatisfied with the conclusion.

Bomb Chicken is a very innovative puzzle-platformer that unfortunately suffers from a short runtime and limited replay value. However, for those that want a quick little single-player game that stars a cute chicken, there is no game better suited for the job.

Elisha Deogracias is an aspiring accountant by day, freelance writer by night. Before writing for Gaming Trend, he had a small gig on the now defunct Examiner. When not being a third wheel with his best friends on dates or yearning for some closure on Pushing Daisies, he's busy catching up on shonen manga and wacky rhythm games. Mains R.O.B. in Smash. Still doesn't know if he's a kid or a squid.
Related Articles: Bomb Chicken, Indies
Share
Tweet
Share
Submit