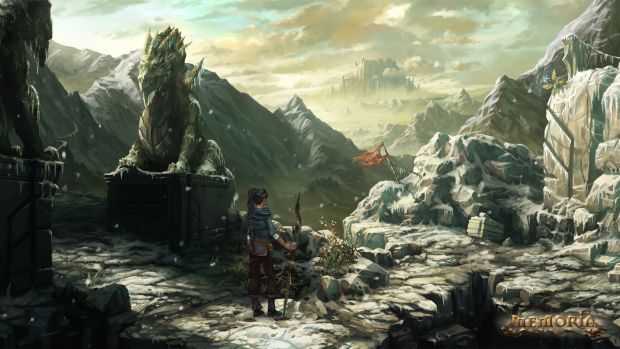 I’ll be the first to admit that I don’t have a storied past with point-and-click adventure games. They’ve never been a genre that clicked with me as I struggled to understand the appealing nature of finding meaningless solutions to minute issues. Due to my negative past with the genre, I didn’t expect Memoria to incite any kind of emotion except frustration from me. Throughout the game, was there frustration? Some, yes. Was there also triumph, happiness, and painful heartbreak? Most definitely.

[singlepic id=16294 w=320 h=240 float=left]Memoria is a game developed through the mind of Kevin Mentz and Daedalic Entertainment. It tells the tale of Geron and Sadja, two people who live hundreds of years apart but are connected in an unknown way. You begin as Geron as he approaches a mysterious camp that he has been sent to in hopes of getting an old traveler to perform a spell on his raven, Nuri. He’s attempting to transform Nuri back into her previous pixie form before she loses all her past memories.

This opens up possibly the strongest relationship in the entire game as both Nuri and Geron have a connection unlike any other. It’s never one hundred percent clear exactly what all they’ve went through, but it is clear that they have been beside one another for a long time. There is an emotional tie, one similar to a big brother/little sister relationship, that yanks at your heart strings every chance it gets. To further top things off, the voice work given by these two characters is incredible in every sense of the word.

The attachment to the compilation of characters is possibly Memoria’s biggest strong point. Apart from Nuri and Geron, the writers consistently establish a plethora of characters that you either fall in love with or despise immediately due to their actions in-game. Those emotions can be attributed to the spot-on writing formed by Daedalic and Kevin Mentz. The life given to these characters propels them into your heart and makes you care about every step and every breath they take.

To complement the writing, the overarching tale being told in Memoria is equally impressive. It’s set in a mythological time where real magic isn’t completely unheard of. [singlepic id=16295 w=320 h=240 float=right]With any ancient mythological setting comes some lingo that can wear on you as time goes forward. Apart from that, the story builds perfectly on excellent character relationships and even takes itself in some places you don’t see coming. Ultimately, this leads to one of the most climactic endings I’ve experienced this year. I was confused, I then gasped, and hell I almost shed a tear. It was glorious.

I can harp on how monumentally brilliant the exposition and narrative in Memoria is all day, but it means nothing if it suffers from unplayable point-and-click mechanics. Thankfully, Daedallic is a bit too smart to let that happen. They’ve put together some brilliant point-and-click ideas that increase accessibility for the genre and for Memoria exponentially. The ideas aren’t entirely unique as they’ve been seen before, such as highlighting parts of the environment that you can interact with, but they still go a long way in keeping you from getting too frustrated.

Another very neat addition is the fact that when an item is placed over something it can be used on, there’s a highlight around it. This helps you avoid the issue of trying every item on every inch of the screen. Of course, you can turn this off if it makes the game a bit too easy for you. Unfortunately, I did find the highlight mechanic to not work properly in certain late-game situations, which was quite odd. One other intelligent inclusion was the integration of multiple spells. The ability to freeze and unfreeze items, get into people’s minds, etc. really adds a unique feel to an archaic point-and-click formula.

[singlepic id=16296 w=320 h=240 float=left]That being said, there are without a doubt some very difficult puzzles to be found within Memoria. Though I make it sound easy, there were multiple times where I found myself still pounding my head against my monitor despite the helpful attributes at my disposal. For the record, I did use both the highlighting mechanics so I can only imagine playing without them is much more difficult. Thankfully, Memoria does avoid one issue the genre typically suffers from which is the puzzles seeming nonsensical in a really frustrating fashion.

In without a doubt the most unfortunate thing about Memoria, I experienced multiple launching issues with the game. After installing from Steam and launching Memoria, it crashed immediately after the introductory video finishes. This issue continued no matter how many times I restarted the PC, restarted the game, or even began a whole new save game. Lucky for me, the issue was finally rectified once I completely uninstalled the product and reinstalled it. This is a known issue so hopefully Daedalic will fix it in the future, but it’s definitely something to keep watch for.

To say point-and-click adventures live and die by their visuals would be a bit off point. But the visual design is possibly the most overlooked aspect of the genre. Drawing beautiful art that you will not get tired of staring at for 40+ minutes while completing a puzzle is insanely difficult. However, Daedalic did just that as they introduce a new pane of beauty in every environment you enter. The animations themselves are a bit stilted and awkward, but in a way that seems very intentional. It adds some character and intrigue to something as minuscule as animation.[singlepic id=16297 w=320 h=240 float=right]

Memoria suffers from some technical issues when you launch it, and that’s very unfortunate. But once the game gets going, it sinks its hooks deep into<> you and refuses to let go until the credits roll. Due in part to its smart mechanics and gorgeous art, but mostly in thanks to its narrative. It features some of the best characters and storytelling of the year and deserves to be played by everyone, no matter your thoughts on the point-and click genre. Simply put, Memoria is an achievement of a video game.