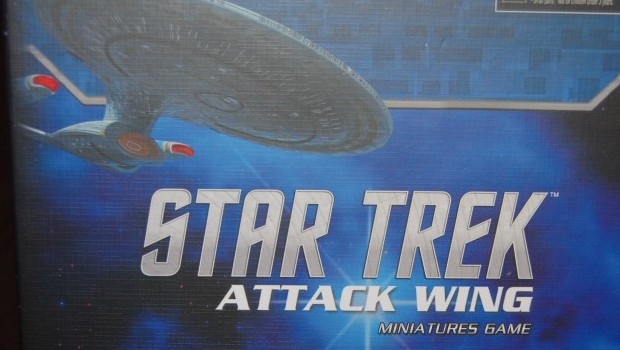 For a while, the Star Trek universe felt like it had gone a bit stale with the end of Enterprise. That changed with the most recent J.J. Abrams movies. While some debate exists to how much these movies actually feel like Star Trek, there is no denying that they have helped bring interest to Kirk and company. WizKids has created some great games with the Star Trek license, in particular Fleet Captains, and now they are looking to bring the capital ship battles to the table with Star Trek Attack Wing.

Attack Wing includes a quick start guide that features a simplified version of the rules. I recommend going through these to get a basic feel for the game. The regular game doesn’t have that many more rules to it, so don’t be afraid to use these rules with experienced gamers.

When opening the box, you’ll find the following components:

The plastic ships have a nice bulk to them. They are small, but the molds have great details to them. They look very accurate to the ships seen on TV as well. Plenty of room exists to put everything back in the box, but don’t plan on putting any other ships from this wave into the box.

At setup you pick your Faction, the corresponding ship, Captain, maneuver dial, and associated faction cards. These are all marked with the faction symbol to make sorting of these easy to do. All of the cards are laid down in front of you face up, and shield tokens are placed above your ship’s card with the active side up. Then the ships are placed in the starting area, typically a 3’x3’ square. Then the game can officially begin.

Each game round has four phases. First is the planning phase, where you select how your ship is going to move with the Maneuver Dial. The next phase is the action phase where each ship moves and performs an action in ascending order of Captain Skill. Then the combat phase occurs where ships can attack, if possible, in descending order of Captain Skill. Finally the end phase occurs, where disabled shields are flipped back to active, special tokens are removed, and any end phase abilities are resolved.

Movement is done with the maneuver templates, sliding it up against the slots in the front of the base, holding the template in place, and then moving the ship so that the slots in the back of the base match up with the template. Actions include evasive maneuvers which can cancel 1 damage, a scan that reduces the number of defense dice rolled by that ship, and battle stations which makes the battle stations logo on the attack or defense dice rolled counted as a success.

Cloaking ships are handled in both the movement and combat phases. Cloaked ships have the ability to move sideways, while in combat they are allowed to roll extra defense dice. Since it is difficult to replicate cloaking in a game like this, these rules do a good job to help give the cloaked ships unique powers.

During the attack phase, in descender number of the ship’s Captain, the range ruler is used to determine if the ship is in range, and if an extra attack or defense die is used based on the distance between the attacking and targeted ship. The active player declares the target, rolls the attack dice equal to the ship’s primary weapon’s value, and then modifies the attack dice if they wish with the abilities they have. Both damage and critical damage markers can show up on the attacker’s dice, which The owner of the attacked ship does the same with the defense dice. The dice are compared and damage is dealt to the attacked ship if the ship was hit. Active shields are removed from the ship first, and then damage cards are assigned to the ship. Damage cards are given face down for regular damage, but played face up showing a disadvantage for each critical damage. When a ship receives as many damage cards as its hull value, the ship is destroyed.

Some of the rules might seem a bit daunting at first, but after a few turns the order will seem natural. The game can play quickly if you decide your movement for your turn without hesitation. Basically you select your movement, move, take actions, and attack. The game also rewards going on the attack, as you have a much higher chance of rolling a hit then rolling an evasive action. This helps the game play faster as well. Besides, the main object of the game is to blow up your opponent, right?

The base game comes with three ships from three different factions, but two Federation, two Romulan, two Klingon, a Cardassian, and a Breen ship are already available in Wave 1. Having three ships isn’t bad for a starter set, but if you are OCD about getting every ship or expansion for a game, Attack Wing can get expensive quickly. Still, the variety of factions available can, and probably will, increase. The amount of variety possible here is unfathomable. Who knows, we might see Ferengi and Kazon ships in the not too distant future. Having more factions makes the possibility of team battles more plausible as well.

WizKids has created games with quality components, and Attack Wing is no different. The multiple tokens and maneuver templates are thick. I don’t doubt that they will last many plays without issue. May damage cards were curved when I got them, but not to the point that they aren’t usable. The other cards are fine. I do wish that the cards were a bit thicker, but they shouldn’t see much wear and tear since they aren’t going to be shuffled constantly like a deck builder.

While a lot of Star Trek is about exploration and contacting new civilizations, some of the best moments in Star Trek is from the battle sequences. The Dominion Wars with the Jem’Hadar fighting against the Federation under the backdrop of Deep Space Nine was one of the best space battles ever created. It’d be on the top of my list to be recreated using this system. I don’t know what we’ll see in the future, but I’m looking forward to see what they have. The Star Trek Attack Wing starter set is a great introduction, and with only a few more ships can really enhance the experience. I highly recommend it.