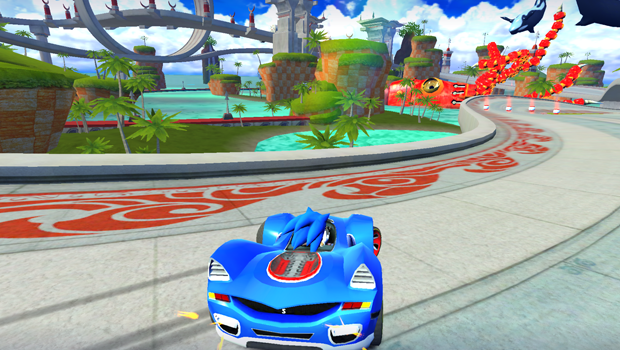 Sonic & All Stars Racing Transformed (hereafter Sonic Transformed) is Sega’s most recent foray into the world of iOS gaming, providing some of the company’s most well known characters and environments for the purposes of pick-up-and-play racing fun. What we have here is a mix of Sonic, Panzer Dragoon, Jet Set Radio and other past hits, wrapped up in a singleplayer and multiplayer racing title featuring some cute environments, a decent array of modes and unlocks, and – of course – a cash shop option that manages to be on the fairer side of unobtrusive. While it probably won’t be known as a title that added something innovative to the racing genre, Sonic Transformed is probably going to end up as a must-have title for any Sega fan who already has an iOS device in their pocket or living room.

One thing Sonic Transformed has going for it right away is content – the variety of characters and maps on offer is considerable, as is the diversity between them. Naturally characters from the Sonic series are heavily represented, including Sonic himself, Tails and Amy as initially unlocked character options, while Shadow, Knuckles, Metal Sonic and Dr. Eggman are available for unlocking during the course of gameplay. In addition to the mighty blue hedgehog’s gang, there’s also a variety of picks from past Sega hits – Gum from Jet Set Radio, BD Joe from Crazy Taxi… even Amigo from Samba de Amigo and Ralph from Wreck-it Ralph makes an appearance. There are a few more unlockable characters as well, but that should give you a glimpse at the variety of Sega IP being provided here. The environments of the tracks seem to be just as diverse, paying homage to Panzer Dragoon, Samba de Amigo and other titles. It’s like walking (well, racing) through an all-out Sega amusement park.

There’s also a good variety of gameplay modes here too. Sonic Transformed will let you race on land, sea and air – though mostly land – through a number of different challenge types. While most simply emphasize getting across the finish line before anyone else, others put more of a focus on maintaining long drifts around wide curves, picking up boosts during the course of the race, or even multiplayer head to head challenges. Singleplayer is largely split between World Tour and Grand Prix, with World tour comprised of various different (and systematically unlockable) modes, while Grand Prix is focused more on straight up racing – tasking you with winning multi-lap races in order to win a trophy and advance to the next challenge. Online and local multiplayer is also featured, along with Facebook integration – great for those of you who love playing with and competing against your friends.

The actual gameplay of Sonic Transformed is passable. Players can choose between touch and tilt controls to control their racer, and while the touch controls seemed a little too loose for my taste, the tilt controls made the experience easy to pick up and get into. The sole problem I experienced here was with the ‘flight’ portions of the race. While tilting left and right works fine for maneuvering a plane or a car, the sometimes sudden transition to the ‘flying’ mode in the game – took me by surprise, and was the exact opposite of graceful. I found myself struggling to just keep flying in a straight line all of the sudden, unsure what direction my iPad was expecting me to orient it in order to do anything but grind up against cavern walls while I dropped from first place to nearly last. iOS 7 controller support is touted for this game, but lacking one of those devices, I can’t attest to whether that improves on the experience.

That aside, racing in Sonic Transformed is straightforward and follows after other iOS racing games. You can turn left and right, you can press a button to drift around corners, and – similar to the Mario Kart series – you can also pick up boosts during a race to either give yourself an edge, or knock an opposing racer out of commission for a few precious moments. The game also features a currency system, allowing you to pick up rings and stars that can be spent on a chance at buying some performance enhancement at the start of the race, or used to make attempts at races beyond the initial ‘easy’ mode once they’re unlocked. Of course, if you’re not earning rings or stars fast enough, there’s a cash shop option available… including the option to unlock all the races in the game once and for all for $9.99, along with other similarly priced packs. I never quite know what to think of cash shops. I certainly don’t think there’s anything wrong with having one, nor does Sonic Transformed seem particularly offensive on this front – though $9.99 for a full unlocking of the tracks (and this apparently doesn’t include character unlocks) seems on the high side for an iOS game of this calibre.

In the end, Sonic Transformed is a decent racing game that offers some good variety in terms of game modes, characters, and environments. The actual gameplay is decidedly average – it gets the job done without really either amazing nor particularly bad. It’s probably going to be a must-have for any fan of Sega’s long and star-studded title history, and it may be worth a look for someone searching for an iOS take on Mario Kart styled racing games. Just be ready for some situationally slippery controls and a cash shop that may be a bridge too far for the cash-conscious.

Sonic & All Stars Racing Transformed is ultimately a decent iOS racing game that serves as a tribute to Sega's past hits. While it's not going to transform the iOS racing genre, it offers a nice callback to some popular past hits - from Sonic the Hedgehog to the Panzer Dragoon series and more - which is probably reason enough for any Sega fan to pick this one up.