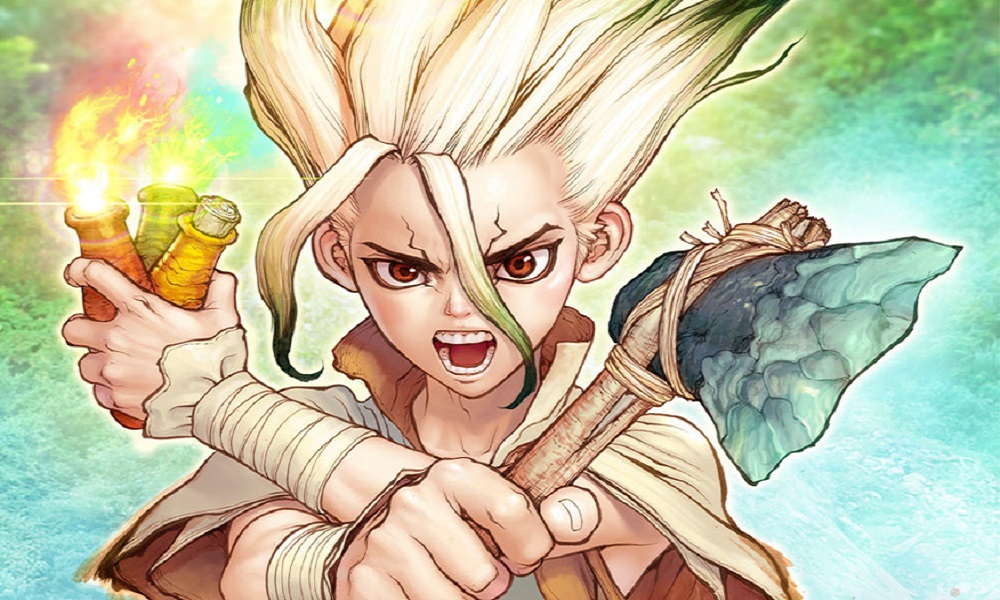 The end of the world is nothing new. From zombies to plagues to divine acts of God, there’s already a multitude of works that depict humans suddenly dying off and disappearing. On that end, Dr. Stone might not be unique; however, its blend of Shonen action, comedy, intriguing characters, and a world that is waiting to be explored make this a perfect manga to jump into if you’re looking for a wild ride.

Within the first few pages of Dr. Stone’s initial chapter, we get to witness the lovely act of everyone dying – or at least something close to it – as everyone around the world turns into stone. Hopeless romantic (and one of our protagonists) Taiju wants to confess his love to his crush Yuzuriha and tells his best friend Senku about it. It’s in these first few pages alone that we get to establish a genuine and heartfelt friendship between the hot-blooded teen and the calculated scientist, and it’s something that I appreciated immensely, especially reading through the rest of the pages with additional problems popping up with the feral jungle setting.

After getting blinded and subsequently petrified, Taiju holds onto his consciousness and is preserved as a rock until he mysteriously reawakens after thousands of years. Curious and disoriented, he realizes that Senku had been awakened prior to Taiju breaking free, and together, the two try to restart civilization by working on an antidote to reverse petrification. In the meantime, they have to survive against animals who have evolved and gone feral since humanity was wiped out, and learn to use technology that dates back from the literal stone age.

While the main premise feels straightforward, the introduction of the main villain throws a wrench in the duo’s plans; while trying to fix their antidote, the pair run into some feral animals that want to kill them and have to resort in reviving Tsukasa, a beastly man that is more than capable of holding his own in a fight. Unfortunately, his introduction also brings a schism in the argument; whereas Senku wants to restart civilization with everyone intact, Tsukasa is only concerned about reviving the world without adults, destroying any older statues he sees. After his introduction, Taiju and Senku hurredily revive Yuzuriha (who Taiju originally wanted to revive first) as they try to create gunpowder in order to neutralize their current threat. It’s this conflict that drives the story past the end of the first volume, with the trio of friends running to a faraway destination in order to complete their goal.

When I read the first chapter through the Jump Start initiative (where Shonen Jump picks up the first three chapters of series debuting in Japan), I was a tad unimpressed, but having seen a bit more of the story, I’m interested in what happens next. The first half of volume does start a little slow, but it sets up the mysterious situation the protagonists are in, and builds to a climactic race against time. While not necessarily bad, the pacing in the first few chapters feels a bit slower than normal, but overall it’s quite alright due to the fact that worldbuilding is done in these pages.

The friendship between Taiju and Senku is heartfelt, and while the former does get into some stupid shenanigans (complete with exaggerated reactions from Senku), it seems that the two really get along well. The contrast between the two feels complementary as well: while a genius scientist, Senku knows his emotional flaws and physical weaknesses, which are covered by Taiju’s courage and willingness to save his friends. Senku’s pleas for help seem genuine instead of secretive, and he loves humanity and wants to revive it once again, with everyone intact. It’s an inverse of the insufferable genius trope, and I enjoyed Senku’s personality very much.

Considering the story only has four characters at this point, I was surprised with how much conflict could be discussed here; the worldviews of the protagonist and antagonist are clearly different, and their motivations and personalities could not be more different. Tsukasa is a villain who has been molded from trauma (seeing as how he wants every adult gone, not just bad ones), but his extremism and ungodly physical power is a great contrast to Senku’s coolheadedness. It’s one showdown I can’t wait to see resolved in the next volumes. I quite liked the art too, as it reminded me of Riichiro Inagaki’s previous work, Eyeshield 21. While that one was drawn by another artist, there’s still those fun exaggerated expressions and cool action shots here and there. It helps that a lot of the world is encased in stone, and the gray-scale format of manga really translate that well.

Dr. Stone is one of the best new Shonen manga on the market today. With likeable protagonists, a slick art style, and a serious conflict buildup, this has all the ingredients of a winner in the future.

Elisha Deogracias is an aspiring accountant by day, freelance writer by night. Before writing for Gaming Trend, he had a small gig on the now defunct Examiner. When not being a third wheel with his best friends on dates or yearning for some closure on Pushing Daisies, he's busy catching up on shonen manga and wacky rhythm games. Mains R.O.B. in Smash. Still doesn't know if he's a kid or a squid.
Related Articles: Beyond the Page, Dr. Stone Volume 1
Share
Tweet
Share
Submit