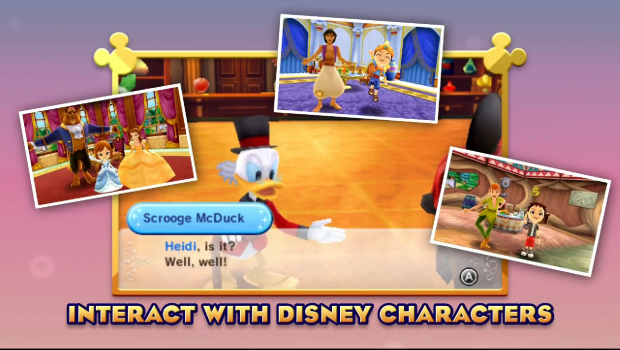 I’ve got Goofy wanting me to find some denim to mend his pants, Donald wants me to catch a bunch of fish for him, my cafe just ran out of stock of those special tarts I made, and Aladdin needs me to go on a quest for him. While all this is going on, I must make sure I tend the garden so Winnie the Pooh’s flowers grow just right.

Disney Magical World lets me run around a virtual world with dozens of Disney characters, all while completing a series of errands for its many denizens. It’s not that I’m not enjoying the menial tasks that it throws at me—Lord knows I enjoyed the crap out of Animal Crossing: New Leaf. But the amount of back and forth required to make progress is daunting if you don’t force yourself to slow down a bit and enjoy the scenery.

Speaking of Animal Crossing, Disney Magical World takes more than a few cues from that series, though instead of spending time with a bunch of random (though admittedly adorable) animals, you’re hanging out with Mickey Mouse and crew. You’re the newest resident to Castleton (yeah, I don’t really remember that from any of the movies, either, but whatever), and apparently everyone in the Magical Kingdom is walking around like a headless chicken when you show up.. You’re the only one who can help the town’s denizens take care of their daily tasks, and as you complete more objectives, you’ll find more and more things to do in Castleton.

These opportunities are actually entertaining, and some are downright surprising. You can buy clothes to outfit your avatar or furniture to decorate your cafe (or craft your own). That cafe can be stocked with countless new dishes to earn you money. You can go fishing, grow crops, collect trading cards—even take part in some light action-RPGing to complete quests and gain more items. Fulfilling these requests and achieving milestones unlocks more mini-games to play, quests to complete, and recipes to create. Where Animal Crossing was good for small, 15-minute bursts of gameplay, you can easily lose several hours catering to the whims of most of the Disney kingdom.

Unfortunately, most of the requests you’ll fulfill are repetitive fetch quests. Go get these doodads and give them to Pete for a new gizmo. Go get these ingredients and make a new set of tables out of them. These quests are easy to take in small bursts, and the rewards are worth the effort, especially when you unlock a new game mechanic or new item. But over time, I got sick of Goofy using me as his own personal pack mule. Donald Duck had more patience for this stuff.

The illusion of customization fades away after a while, leaving you with a severe lack of actual choices to make. Eventually, you can customize your own room with various furniture, as well as dress your own avatar in different sets of clothes, but unlike Animal Crossing, you can’t design anything—you’re simply stuck with whatever you can purchase and unlock. Even so, you can buy and create a plethora of different items and accessories, as long as you’ve got the money and ingredients to make them. Just don’t expect to put your own creativity to much use.

Disney Magical World is a much more focused experience than Nintendo’s other life simulator – for good, and for ill. Running around a facsimile of the Magic Kingdom and hanging with Donald, Goofy, and the rest is a novel experience, and the constant drive to progress, to improve Castleton, and to unlock new features helps to give players a reason to keep coming back. But it’s way too repetitive, its options too limiting, and no amount of magic can hide that.

Disney Magical World is a fun romp with a plethora of objectives to complete and items to create, but by the time you find yourself running across the same stretch of land for the umpteenth time to gather more items for that next quest, the magic starts to fade.