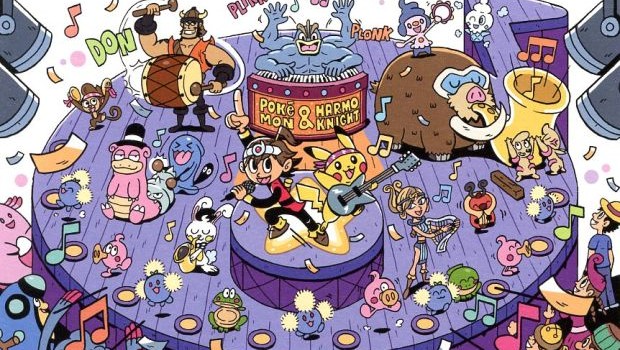 $14.99 is a lot of money to ask for. With that kind of cash, you could buy fifteen copies of Angry Birds – or an infinite number of copies of Jetpack Joyride or Temple Run. When a company charges that much money for a game, there are certain expectations that go along with it.

So, when Nintendo asks for nearly fifteen bucks for a game that ends in a couple of hours, I have to wonder – what are they thinking?

HarmoKnight isn’t a bad game – in fact, it’s downright fun for the brief time you’ll spend with it. Game Freak, the team behind the Pokémon games, has created a rather unique take on the “endless runner” genre, one in which music forms the backbone of the entire experience.

[singlepic id=11300 w=320 h=240 float=left]A meteor has crashed, bringing with it Noizoids, evil monsters that only Tempo – along with his trusty wand – can vanquish. Each of the fifty or so stages plays out like a brief, one to two minute interactive song. Tempo will furiously run to the right, either swiping at enemies in sync with the music, or jumping to avoid pitfalls and spikes. Occasionally you’ll hit a branching path, allowing you to take either the high or low road, but ultimately, it’s all about smacking Noizoids along with the beat, and making your way to the goal at the end. HarmoKnight demands near-perfect timing, and it can be frustrating to think you’ve hit something, only to find you were off by just a hair.

Luckily, the whole game is really charming – I mean, Game Freak is behind this, that should go without mention. As Tempo makes his way to the end of the game, he’ll travel across a world map, reminiscent of 16-bit platformers. Boss fights are nerve-wracking – in the best way – and you’ll hold your breath while you try to finish the level with only one heart left. All of the characters are beautifully animated, and the music all sounds like a combination of video game soundtracks and Christmas-time. While the music is fine, it all starts to bleed together after a while – each world has a different theme, but the chimes, bells, and synthesizers all sound similar from level to level, and each song has the same bouncy, saccharine feel.

Along the way, Tempo will meet a few new friends, each giving the player several different ways to defeat the Noizoids. It sounds like it’s a great idea, but you’ll only be able to switch to a different character at specific points in certain levels. It’s a nice change up, but it would have been better if you could choose characters at any point in the game.

[singlepic id=11301 w=320 h=240 float=right]And that’s ultimately the problem with HarmoKnight: there’s just not a whole lot of depth. You’ll collect notes as you travel through the levels, but it’s mostly used as a score, rather than for any purposeful collecting. The world map is a nice touch, but there’s really no point behind it – there aren’t any secret levels off the beaten path, and other than a few branches, it’s entirely linear. You’ll reach the end of the game, and after thinking there’s some kind of Nintendo twist – a second quest or some such thing – it ends. You can go back and unlock a hidden world with harder levels, as well as repeat all of the same levels at a faster tempo, but the story ends after a mere handful of hours.

HarmoKnight has the Nintendo polish, but you’re spending $14.99 for what is essentially a glorified mobile game. The lack of depth normally found in Nintendo games, and the brevity of the whole experience makes this one a hard sell. At $4.99 this would be almost a no-brainer, but I cannot recommend this as a must-buy at such a high price. Look at it this way: Bit Trip Runner 2 costs the same amount of money, offers a similar experience, and gives you more than twice as much content, with many more playable characters, moves, and levels. Go get that game instead.