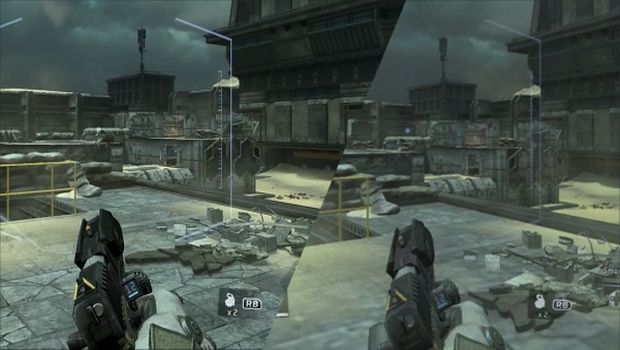 “Titanfall for 360? That’s gotta be a mistake…” was my first reaction when I heard about this release. I mean, Titanfall is one of the primary (some would even consider it the flagship) releases for the Xbox One’s vanguard of new IPs, displaying its seamless graphical horsepower and the new capabilities of Xbox Live’s reinforced networking. I mean, to play Titanfall, I must either buy it for PC or purchase it for the Xbox One right? It’s supposed to be a system seller of a sort, right?

Well, for those of you believed that, the good news is despite this release, you’re still mostly correct. If you want to play the Titanfall we saw demoed at E3 last year, where you could see each plate of a Titan shift as it sidestepped a battery of rockets, the two original options are the only way to go. However, if you simply want to take part in the action Titanfall advertised, look no further.

Now if anyone was curious, Titanfall 360 is still Titanfall, which we covered just about a month ago when the title hit shelves. Yes, some expected corners have been cut so the game could run on the 360’s significantly leaner architecture, but it’s not a completely different variant that it shares a name and little else. All of your wall-running, jet-pack jumping, and smart pistol kill-streaks are still here for the taking, and for more information in that regard I point you respectfully toward our previous review. Here, we’ll be talking about Titanfall 360, and while I stand by this version being a good game, the differences between the two stood out more than I expected.

As soon I passed the title screen, I was welcomed with an apology for the server issues I’d be encountering, which I accepted with a vapid sigh. As anyone familiar with latency issues in a multiplayer deathmatch would agree, “server errors” can range anywhere from opponents teleporting across the map to them becoming invulnerable behemoths staggering across your screen, slowly trudging in place until their players quit the room or the software dumps the entire match. Titanfall’s particular brand of errors, at least in my experience, was slightly longer lobby times, which, when compared to the alternatives, was a pleasant piece of bad news.

The next bit of ugly were the unanimated mouths and motions of the drop ship crews as me and my platoon sortied into battle. (I mean they would looked right at me, and speak with no lip motion… It was disturbing.) The screen would then cut in and out to black as the subtitles displayed across my television, and not in a dramatic or cinematic sense. My team and I would be there as the mission was being explained, before the image cut to darkness with a stutter of the audio, and then the animations would fade back to where they had been while the dialogue moved along without missing a beat. This was something that happened consistently, so I’m not sure if this was part of the pre-apologized-for problems or the launch state of the game itself, but Titanfall is all about the set up, not the narrative, which made ignoring the issue pretty easy once your virtual boots hit the ground.

Even without playing the Xbox One version of the game, the Xbox 360 edition of Titanfall feels scaled back. You can see the places where details were supposed to be and have been smeared into something else. That’s not to imply the 360 version of the game looks bad; they look exactly how you’d expect a triple-A 360 title to look in this day and age. However, from an artistic standpoint, you can also see all the areas that would never have been designed or drawn the way they had been if the game had been created for the 360 originally. This slip in definition can be felt when grunts seem to simply melt into the background colors or the radar icons are too faint to be useful, which, unless you give Titanfall its own custom TV setting, can become irritating.

This game does play wonderfully though, with not a single stutter or skip on any of my many missions. Weapons fire, titanfalls, fine analog control on snipes and trick shots; all of it performed beyond my expectations. As I became more familiar with the game’s functionality and pacing, the more and more I knew I wouldn’t have it any other way. Sure, this game looks good when it was created to look amazing, but even with the drop in frames at no point did I feel cheated or trapped by a sloppy interface or crummy support. With practice, becoming a great pilot in this version is a very real possibility, and that’s a very cool thing for those of us who don’t yet have the $500 bucks to drop for a Xbox One. Whatever that means for Xbox One purchases, I’m not entirely sure, but for fans of first person shooters, this is a big get.

Titanfall 360 may not be as pretty as the Xbox One edition, but it’s just as functional. Online-only games place most of their burden in places you’ll never see, giving them plenty of time to isolate complaints and patch up the holes. If getting your hands on Titanfall was something you’ve been salivating over but committing to a new console stood outside your means, the gaming gods have heard you... and they have been kind.