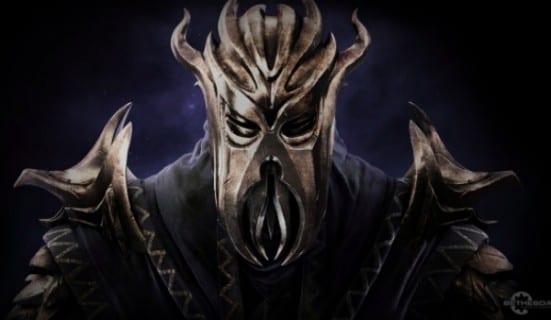 Years ago I spent much of my time wandering the island of vvardenfell in The Elder Scrolls III: Morrowind, and my obsession was extended during my adventures in Solstheim with the Bloodmoon DLC. Back then, the frosty island was home to werewolves, Nordic tribes, and the Daedric Prince Hircine. A lot has changed in 200 years though and with Dragonborn, players return to Morrowind and Solstheim in the first substantial DLC offered by the Elder Scrolls V.

My journey to Solstheim began immediately, as I appeared in Whiterun and was met by two cultists wearing the products of a  demented arts and crafts festival. They told my Dovahkiin that he was not the true Dragonborn and attacked him, which the Dovahkiin didn’t think was very nice and chopped off their heads. While collecting the spoils of his homicide, the Dovahkiin discovered a note on one of the deceased that told of a boat to Solstheim and a mysterious guy who thinks I should be dead. Tempted by the allure of more murders and looting to come, the Dovahkiin headed for Solstheim.

“This creepy mask will protect my face, right?”

The story that follows revolves around Miraak, the first Dragonborn, and Hermaeus Mora, the Daedric prince of fate, knowledge, and memory; the latter of which makes Dragonborn’s story a truly captivating experience. Dragonborn’s campaign will have the player exploring new Dwarven ruins, pillaging Nordic resting places, and searching for hidden knowledge in Apocrypha (Hermaeus Mora’s plane of Oblivion), all with the intention of defeating Miraak and releasing his hold over the minds of the people of Solstheim.

Dragonborn offers a ton of unique gameplay experiences, and a whole new island for players to discover, so the DLC refreshes a game that most people have already spent countless hours mastering. I spent most of my time in Solstheim searching for the elusive, but lucrative, Black Books that, once read, would transport my character into the realm of Apocrypha. After varying stretches of exploration, players will eventually discover a few secrets of Hermaeus Mora, and be allowed to select one ability to take with them as they make their way back to Nirn. In another series of quests, I found myself chasing down the secret to making a new, special kind of armor, which pitted me against the loathsome Thalmor. And for an old nerd such as myself, this was all enhanced via the Morrowind backdrop that the whole thing is set upon.

Although Dragonborn offers many new experiences, there are some aspects of Solstheim that may be all too familiar to fans of Skyrim, such as the Skyrim-esque dungeons filled with tiresome hoardes of draugr, and overused dwarven ruins laced with mechanical terrors. Luckily, these repetitive experiences have (in most cases) been updated enough for players to enjoy a little more variety. One such dwarven ruin, for example, has players chasing dwarven cubes that control the water-level of the dungeon in what seems to be an ode to the Ocarina of Time’s water temple. In a different quest, players will have to trudge through the same collapsed Nordic tomb several times, but during each trip the tomb will become more and more excavated, with a veritable prize awaiting players determined enough to reach the tomb’s furthest depths. These well-crafted quests help give variety to a formula that has become conventional after more than a year of playing Skyrim.

Of all the new abilities, items, locations, and enemies that Dragonborn offers, none excited me more than the prospect of riding dragons, which was alluded to when Dragonborn was first announced, and unfortunately it is the biggest shortfall of the DLC. In order to mount dragons, the player must first obtain all three words of the new “Bend Will” shout, which is part of Dragonborn’s main quest. After all things are said and done, players are free to roam Skyrim, forcing dragons into temporary allies as they please, however doing so reveals the disappointing gameplay involved. While atop a dragon, players have the ability to lock onto targets, attack said targets, and order the dragon to land, so they can dismount…and that’s it. I had dreams of flying my dragon across Skyrim, but instead players are subject to the random whim of the dragons, which usually involve flying in circles aimlessly. Dragons can also fast travel to different locations, but when you get to where you’re going, it’s more of the same, and that means that there aren’t many ways for the player to utilize dragons.

As it turns out, the life of a dragon requires quite a bit of flying in circles.

Dragonborn plays every bit as good as Skyrim, but is plagued with the same glitches and performance issues as the main game. In the first few minutes of gameplay, a subtitle stayed frozen on my screen and never left until I reloaded my save file. Also, anytime I entered Apocrypha via a Black Book, the game froze in place for 15-20 seconds before loading properly, which sometimes interrupted the cinematic experience.

Despite the DLC’s sometimes repetitive experiences, occasional glitches, and underwhelming dragon mounts, Dragonborn is the first major expansion for the Elder Scrolls V, and is worth every penny you’ll pay for it. With a new island to explore, another plane to conquer, tons of new items and abilities to discover, and a story worth playing, Dragonborn represents everything a Skyrim fan could ask for from a downloadable add-on. Longtime Elder Scrolls fans like myself will be happy to return to Morrowind, and will be rewarded with quite a few callbacks to their actions in the Elder Scrolls III. Dragonborn’s shortcomings should be no reason to miss out on the best reason to revisit Tamriel in the past year.