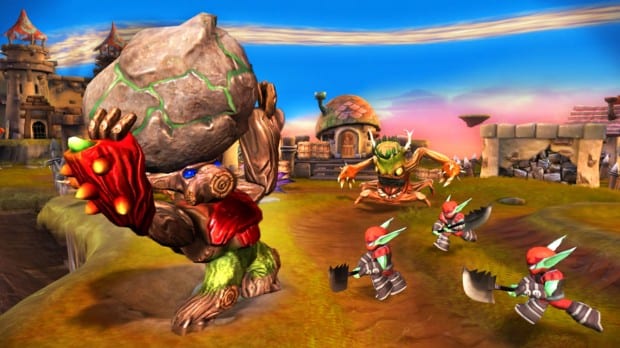 Skylanders Spyro’s Adventure came out of nowhere last year to become the hottest selling toy of the holiday season. It sold out in droves, forcing parents to pay high scalper fees in order to sate their kids’ desires come Christmas time. The absolute fever pitch of Skylanders-mania surprised everyone; everyone, that is, except for Activision, who has decided to turn Skylanders into a yearly franchise (as they are wont to do). It’s a brilliant idea: give the kids a small taste for a reasonable price, and drum up desire within the game by leaving players hanging unless they buy more action figures. Skylanders Giants (which has dropped Spyro almost completely from the game, and is not even included in the Starter set) is this year’s addition to the franchise, complete with new figurines and updates to old ones, and its worth as a game comes entirely from how much money you’re willing to put into it.

[singlepic id=9498 w=320 h=240 float=left]Skylanders Giants quickly sets the tone, unabashedly embracing its clearly commercialist goals right off the bat. Kaos, the villain from the first game, has been banished to Earth as a figurine in a toy store, and, while surrounded by other Skylanders figurines, uses a Portal of Power (yup, that thing that comes in the box you bought) to transport himself back to the Skylands. Upon returning, he has hijacked a Giant — the new addition to the franchise — and continues to cause more havoc. The plot is paper-thin, reminiscent of children’s Saturday morning cartoons which were more about getting kids to buy toys than it was about providing an actual entertainment experience. It’s basically there as a way to move the game from location to location and give players a reason to go out and buy new figurines. If the game weren’t any good this whole thing would be moot and I’d tell you to outright pass on the whole thing, but luckily, Giants is actually pretty entertaining.

As you travel through the different areas of the Skylands, you’ll take your ragtag group of eclectic creatures and pit them against various evil monsters whose sole purpose is to prevent you from making it to the end of a given level. It plays out like a dumbed down version of Gauntlet or Diablo, where you’ll guide your Skylanders through a series of challenges, fighting off bad guys, gaining experience points, levelling them up, finding hidden treasures, and solving some light puzzles (mostly relegated to pushing blocks around, though later levels tend to come up with some pretty novel ideas). It’s all pretty mindless, and nothing ever gets too challenging, but there is a surprising amount of variety on display here. With sections that borrow from on-rails shooters, a minigame very similar to the card game from Final Fantasy VIII, a boss fight that gave me flashbacks to Ikaruga (!!!) of all things, there are tons of surprises to be found in every level. It does borrow a lot from other games, but it handles most of these disparate gameplay ideas well enough to be entertaining. It’s not perfect by any stretch of the imagination, and the controls tend to feel stiff more often than not. Even so, there is a depth and entertainment level here that is sorely lacking from most children’s games.

[singlepic id=9499 w=320 h=240 float=right]New to the Skylanders franchise is the addition of the titular Giants. These guys are lumbering beasts with insanely powerful attacks, and their figurines tower over the relatively diminutive basic Skylanders characters. The addition of the Giants doesn’t really change the core gameplay all that much, other than adding a few new combat options and obstacles to overcome, but they are really cool to mess around with, and cause way more destruction than the smaller Skylanders.

This is all well and good, but there is one huge caveat with Skylanders and your ultimate enjoyment of this game hinges on whether or not you will buy into it. In order to see everything Giants has to offer, you have to spend money; quite a bit of it, actually. See, each Skylanders figurine has a chip built into the base, and when you place your figurine on the Portal of Power the portal reads the chip and loads the character into the game. All data regarding that character (experience points, stats, abilities, etc.) are saved onto the figurine itself, so intrepid youngsters can take their figurines over to a friend’s house and keep all their information intact. You can beat the game with the three main starter figures — you have to have one of the Giants at the very least, as there are certain barriers to progression that are only surmountable by them — but there are tons of hidden secrets in each level: there are hidden hats which provide stat bonuses to your Skylanders, Soul Gems which unlock hidden abilities, treasure chests which shower you in jewels, and other secrets. Many of these hidden items lie off the beaten path, to which you are barred passage unless you have a Skylander of the proper element. You get three Skylanders in the Starter Set: Cynder (a Death-based Skylander), Jet-Vac (an Air-based Skylander), and Tree Rex (a Giant Life-based Skylander). There are eight total elements, so in order to access all of the secret areas, you’ll need at least five more Skylanders to round out all of the element types. That’s about $50 in figures to access content already on the disc.

[singlepic id=9500 w=320 h=240 float=left]Giants constantly pokes you with that carrot-on-a-stick the entire time you’re playing the game. When you collect a Soul Gem, you’ll unlock a new power for a Skylander, but chances are it’ll be for one you don’t already own. It will then ask if you want to watch a preview video for the Skylander whose power you just discovered. It’s essentially a quick ten-second sizzle reel showing off how amazing this Skylander really is, and why you need to run out right now and grab it. I admit to being swayed by all of this and if I were a weaker person (or my daughter were old enough to really understand this whole concept and force my hand with begging and pleading), I’d be plunking down cash to experience everything this game has to offer. I literally hated myself during the times that I came across a blocked off area requiring an element I didn’t have and thinking to myself that I needed to go out and rectify this impasse I found myself in. Giants feeds on that part of your brain that desires completion and collection and will use every weapon in its arsenal until it finally breaks you, making you run to the nearest toy store to grab more of these plastic toys.

You will also find the game far easier the more figurines you have in your possession. Each Skylander is essentially one “life” in typical video game parlance; if it dies, you must retire it until you complete the level and switch to a different figurine. The more Skylanders you have, the more “lives” you have to complete a level. While the normal difficulty isn’t that hard, there is a harder difficulty level, and I imagine it can get pretty rough without having that safety net available. Also, certain areas contain affinities for different elements, granting strength and experience bonuses to Skylanders of that type and encouraging players to constantly be switching out their figurines rather than relying on one type to get them through the game. It can be a pain to constantly switch Skylanders back and forth because it has to be done by manually picking them up off the Portal (whose cord is only so long) and put a new one on, but it is nice to be able to physically interact with the characters you’re playing with on screen.

[singlepic id=9501 w=320 h=240 float=right]So, you’re essentially paying $10-$20 (or more) for single- or multi-packs of figurines to unlock on-disc content. Activision is at least very upfront about this and doesn’t hide the fact that there are tons of these guys to collect. The build quality of these figurines is absolutely fantastic as well; they clearly could have skimped on production values and I believe kids would still go crazy about them, but the fact that they look so darn cool definitely helps make the concept of buying these figurines that much more appealing. The Giants and special Skylanders known as Lightcores — new to this game — also light up when placed on the Portal, and the effect is really impressive. Also, if you’ve bought into this whole concept from the beginning, rest assured that your Series 1 figures from Skylanders Spyro’s Adventures will port right over to the new game, though this understandably does not work the other way around. If I were back in grade school I would be going absolutely nuts for these guys, begging my parents at every opportunity to get one more toy to add to my ever expanding collection, so I totally see the appeal for this game.

Skylanders Giants is an expensive proposition. To jump right in requires a willingness to buy into the whole concept that you won’t be able to do everything in the game without potentially dropping several hundreds of dollars into physical figurines to unlock content already available on the disc. If you’ve already made that investment from the first game this is kind of a no-brainer, as you get a pretty hefty adventure with a ton of secrets and unlockables and all of your previous figures carry over into the new game. What value you get out of Skylanders Giants is tied directly to how much you’ll be willing to spend on it and while it’s definitely pricey, the added value of a physical product that is actually a pretty well made and exciting piece of tech softens the blow a bit. The game itself is way more fun than it has any right being, and while it doesn’t pull off its concepts perfectly, it does manage to stay interesting throughout, with tons of clever little ideas and nods to other games. So parents, I warn you: your children’s new obsession has arrived, and it’s probably best not to fight it.