When does something go from being a legitimate form of entertainment to becoming an obvious cash in? How do you draw the line? With Skylanders Giants on the Xbox 360, it’s obvious that Activision is trying to make a ton of money with a plethora of plastic toys, virtually requiring extra investment in order to access content on the disc, essentially turning these figurines into glorified unlock keys. It helps that the main game itself is actually pretty fun, despite the crazy amount of money required to explore all of the content it constantly taunts you with. The same really can’t be said about Skylanders Giants on Nintendo 3DS. What was a fun, if expensive, game on consoles becomes a downright chore on the handheld, which leaves me asking the question: why does this game even exist?

Skylanders Giants on the 3DS tells a different story than its console counterparts, but the experience is largely the same. You’ll traipse through several different worlds, most consisting of more than one stage. All things you’d expect from Skylanders is here: place your figurines on the Portal of Power to put your characters in the game, and run around beating up enemies with impunity to gain experience points. Each level contains multiple secret paths that can only be accessed by various elements of Skylanders. There are a ton of secret items to find, and multiple objectives for each stage add some replay value to the game. The 3DS game may tell a completely different narrative from the console versions, but all the Skylanders you’ve bought will work on the 3DS version of Giants so the only additional equipment you’d need is the special 3DS Portal of Power (which is pretty tiny, and can barely fit my Tree Rex Giant on it). With all of these features, you’d think that the 3DS game would be a comparable experience to the console versions, but alas, it’s not even close.

[singlepic id=9843 w=320 h=240 float=left]When you first boot up the game, you’re required to pre-load Skylanders onto the cart using the supplied Portal. Unlike the console versions, you can actually store two Skylanders on the game and switch back and forth between them by pressing their icon on the touch screen. It’s nice in theory, as it lets you tag team between Skylanders in case one starts to run low on health, and it gives you another chance at having the right element to getting into the secret areas. The problem lies in the actual implementation: you can’t switch your loaded roster in the middle of a level. You have to wait until you get back to your airship to switch out figurines on the Portal of Power. Forget to bring the right Skylander? Tough luck. Get back to the airship, switch it out, then hop back in the level. Why can’t I just load up all the Skylanders I have into the game and switch between all of them? Why can’t I switch mid-level? The switch doesn’t even have to be instantaneous like the console versions; just give me an option in the pause menu that lets me access the Portal to change out my roster. It’s mind-boggling that this option isn’t available.

What should be a fun concept just turns into a giant pain, and these weird design choices permeate the entire experience. Unlockable hats, which normally give upgrades to your characters in the console version, do absolutely nothing in this one. Levelling up either grants you a power boost or a health boost rather than the full gamut of stat increases featured on the Xbox 360 and PS3, and abilities are given at certain levels rather than purchased with coins. Speaking of coins, collecting them just grants an experience point bonus at the end of a level, with no upgrades or items to buy over the course of the game. The lack of these RPG elements and minigames turns Giants 3DS into a lackluster beat-em-up, funneling you from challenge to challenge while you mash the attack button on cookie-cutter enemies and move toward the exit. This is a straight-up action platformer, completely losing all the nuance and depth the major console releases have. In fact, about the only thing I can really say this game offers over the other versions is that the Skylanders run much faster (and can dash at the press of a button) and can actually jump — too bad it never really takes advantage of either of these new abilities, short of some half-baked jumping puzzles.

[singlepic id=9844 w=320 h=240 float=right]Most egregious of all is the frame rate. The graphics aren’t much better than a typical original DS game, and yet the game turns into a slide show when more than three enemies appear on screen or any piece of large scenery approaches from the background. It’s downright appalling to experience frame rate this bad when the game is hardly taxing the system’s capabilities. The game even glitched out at one point, and a weird graphical blip appeared whenever the number 9 should have displayed. The whole package just lacks polish.

While I can absolutely recommend the Xbox 360 version of Skylanders Giants, I cannot emphasize enough how lacking this version is in comparison. The inability to switch Skylanders in the middle of a level, the bland gameplay which lacks the charm the other versions have, and the awful framerate drops, combined with the fact that it costs the same full retail price as the more full-featured console version makes me wonder why this game was even made. Don’t be fooled by the packaging; these are not the Skylanders you’re looking for. 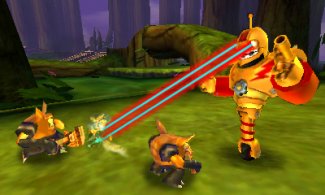 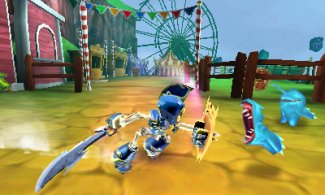 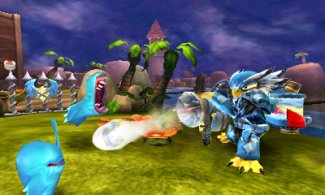 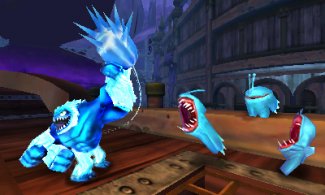 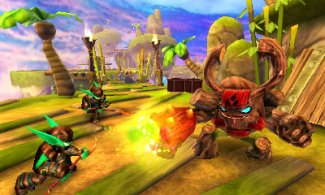