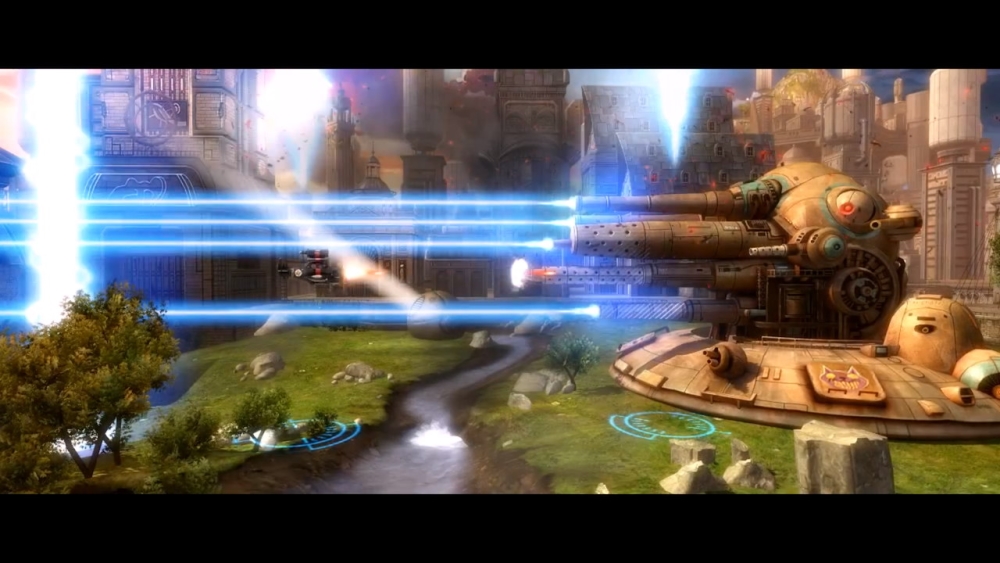 Sine Mora, co-developed by Digital Reality and Grasshopper Manufacture, was well received by the 360 community back in March of 2012. Freshly released on other platforms this past November, I found some time to sit down with the Steam version to see what makes it tick. I first should outline what I understand to be the connections between the collaboration between Sine Mora’s two developers – Digital Reality brought the gameplay, 3D assets, programming and story, and Suda51’s Grasshopper Manufacture of No More Heroes and recent Lollipop Chainsaw fame undertook the art  and sound design.

[singlepic id=10291 w=200 h=150 float=left]Starting with the visuals is easy, because the success is obvious. For a sidescrolling shooter, this game is gorgeous. Field depth, 3D transitions and animations are all smooth and, for the most part, provide no room for complaint. The look and feel of the bosses and the different weapons are  unmistakable, and if you were interested in showing off what advancements can be made in an otherwise ancient genre, Sine Mora is worth a look. If there was one complaint I had with regards to the presentation of the game, it wouldn’t be the occasionally overused 3D loop around major bosses, or the bloom on the  Geometry-Wars-esque bullets. No, it would be the transitions between levels.

When you begin and end a level, you’re treated to a screen or two of text, being voiced in Hungarian, with no option to change it. There is no character representation except a 2D icon of the characters – and with a disjointed page or two of written story about a father’s revenge in the middle of a war, or genocide, or, well, whatever, I found myself losing interest in anything they had to say. In fact, the game itself only loosely connects the gameplay to the story, and most of it comes across about as relevant as Slippy in the StarFox games. I found myself, more often than not, fighting the urge to hold the “skip” button during the talking sequences.  The music and sound effects were on par with the graphics though, even if the voice-overs left me wanting.

[singlepic id=10290 w=200 h=150 float=right]The gameplay is a mixed bag of genius and goofy. Digital Reality stepped up the expectation of the genre with them stepping away from a health bar or instantly replaceable ships, and is a well-executed revolution in the genre. Basically, you have a certain amount of time to play, and if you get hit, it costs you time. When you defeat enemies, you gain time bonuses, so it’s in your best interest to never stop shooting. The main special ability (which can be swapped out in other game modes)is the ability to slow down time for short periods to outmaneuver the onslaught of enemy fire. While you can refill the meter via dropped powerups from fallen enemies, this happens far too infrequently to truly enjoy this added mechanic. I felt it was wasted on anything other than boss fights, and the formula for almost every level was “try to stay alive without using any special abilities until the boss fight”, and the bosses generally don’t drop any boosts themselves.

[singlepic id=10289 w=200 h=150 float=left]Sine Mora is fairly short, and while some of the bosses were truly unique, you spend more time fighting gigantic multi-level bosses than you do side-scrolling – and the interesting combat rarely isn’t dodging boss bullets. Granted, there is more to Sine Mora than a grandiose story delivered through some text screens and subtitles. As you play the storyline mode you unlock ships, powerups and pilots for the arcade mode, and if you’re so inclined, there is also a grueling score attack mode and (thankfully) boss practice modes.

The heart of the game is the arcade mode, where you’ll find endless reasons to throw your mouse, keyboard and possibly even the controller. I’m almost convinced that someone in Digital Reality is getting kickbacks for each panel of sheet rock sold – the game is, beyond Normal story mode, an exercise in masochism. Yes, you can unlock pilots, abilities, planes and even paint jobs for the arcade mode – I just didn’t find any compelling reason to do so. The arcade mode is a rehash of the overwrought story mode, and with no normal mode to enjoy arcade you are cast into the unforgiving fray on hard or worse. [singlepic id=10287 w=200 h=150 float=right]Moreover, if you’re not using a controller, the keyboard or mouse controls are far too unresponsive to tackle anything more challenging than normal. I found it bewildering that they put a slider to adjust the mouse sensitivity, and yet it does nothing. I couldn’t navigate through the first divergent path on hard without a controller – nor could I move fast enough to dodge incoming fire from bosses.

Play, let alone replay, is reserved for the hardcore sidescrolling aficionado. There are some well known and respected names behind Sine Mora – from sweeping scores by Amira Yamoaka to bosses designed by Mahiro Maeda, there is a significant tribute to bullet hell here. It’s just too bad that it isn’t more inclusive of a wider audience – the fun runs out as fast as your life, and the novelty.