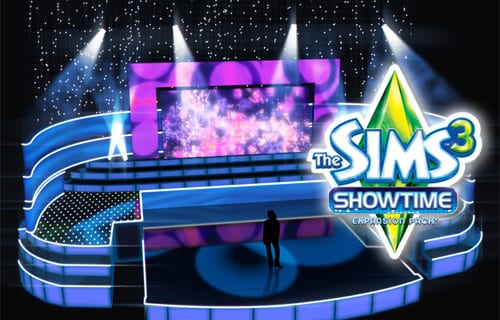 Ever since the original Sims released in February 2000, two things have remained true. Making people get jobs and take showers can be enjoyable in a video game, and there will always be a ridiculous number of Sims expansion packs. We now roll into the Sims 3 sixth expansion pack, but is Showtime worth your hard earned simoleans?

Showtime is all about making your Sims a star, adding new professions, traits, skills, objects, and a new town to explore. It not only opens up new possibilities for your Sims but a whole new way to play. With Showtime there is an enhanced online capability to share and play with other Sims players online. The new achievement system allows players to earn badges for completing special challenges throughout their game play. These new achievements can be viewed and shared on the new in-game player profiles. Also new to the Sims is the ability to see the latest Sims news and updates without having to leave the game.

These improvements helped streamline the interface and gameplay and I felt they added quite a bit while not getting in the way or becoming annoying. All the above features are geared towards hardcore Sims players however and casual players will most likely find nothing of value to them. Also if you are logged into your profile during play some objects will show up in buy mode that can be purchased from The Sims online store for real cash. It is a nice idea but I couldn’t help but feel like it was just a big ploy to get me to find a new item I wanted and in the moment fork over more money for virtual goods. People who don’t mind spending money on the Sims may find it useful for finding new items in different categories, but people who have a hard time spending 40 dollars on an expansion may just see it as a nuisance. Luckily all these features are completely optional and you can choose whether or not to log in every time you start the game.

[singlepic id=4789 w=320 h=240 float=right]The biggest addition that Showtime has to offer is the new career paths. Whether you chose the acrobat, singer, or magician how your Sims work has had a major update. Instead of your Sims just going to work during set hours you are given tasks that you can choose to accept. For instance the singer early on has to sing for tips or deliver sing-a-grams to other Sims in the world. As you complete these tasks your work meter fills up and as you advance in levels you can start getting gigs. Soon you will be playing big venues with fans just waiting to see your Sims perform. This new career system allows you to make money while still being in full control of your Sims and allowing them to do other daily tasks in between performing gigs. It feels new and refreshing on the old take of watching them leave for work and returning. I have to admit I felt compelled to reach the top of my profession just to make them a star and unfold new stories and adventures I created. However for a casual Sims player the new professions aren’t really worth the time and money, these felt like they were geared towards hardcore players looking for something new for their Sims to do.

One of the biggest features that I grew to love was the SimPort feature. SimPort allows you to connect with friends and send your performing Sims on tours into other peoples games. While you can’t actually follow your Sims

into others games you can earn achievements, simoleans, and career experience. Also your Sims will complete their tours whether you are currently playing or not. It’s always nice to log in the next day and see new money and items that were achieved while you were sleeping. I also feel it is a step in the right direction to make Sims even more of a social game. I’ve always felt like Electronic Arts could do more multiplayer aspects in the Sims franchises and I feel this may be the right path. I felt more connected with other players while not annoyed or scared that someone would ruin my town. The overall experience of SimPort was very pleasant and they could really improve and build off of the system in the future to make the perfect balance of not allowing others to ruin the time you have put into your town while also not dumbing it all down like the Sims Online.

Also contained in Showtime is a whole new town, Starlight Shores. As in most towns including in the expansions it is mostly created for Showtime and maximize the new features. The town is pre-built to showcase the venues and new items in the world, and I felt they layout and feel of the new town fit Showtime very well. That being said it also felt like another town in my already growing library. I am not complaining about it nor am I praising it, it just felt like another place to play. I liked the layout, new Sims in the town, and new places to go but it never wowed me or surprised me in any way.

Showtime also comes with new items to deck out your Sims with including; new appearance options, mechanical bulls, pool tables, jukeboxes, DJ tables, and Skee Ball lanes. Some of these items can help in your career paths, such as the balancing ball for the acrobats or the danger box for the magicians. Also you can buy the DJ tables and moonlight as a DJ for some extra simoleans. The items including however were kind of a letdown. The hairstyles and appearance options were all kind of boring, making it harder to create a unique and stylish performer. Also the items such as the mechanical bull and pool tables were fun, but lost their appeal quickly becoming just another item in my house. Overall the new items lacked any lasting appeal and just fell flat for a full-fledged expansion. The only thing that truly felt new was the ability to buy things and set up your stage at the venues so you can make it feel like it is truly a show your personal Sim is performing.

The overall experience was pleasant but very dry. The new traits; diva, natural born performer, and social butterfly all felt like they were well geared for Showtime, but not much outside of that. The same lies true with the lifetime wishes. I enjoyed these while on my run through of Starlight Shores but with all the other expansions and add-ons I felt they fell short of anything outside of the content in Showtime. Also anyone expected any sort of graphic overhaul will be let down. It is still the Sims 3 with the same look, style, and gameplay. Showtime just adds new features but doesn’t change much outside of some social features. Hardcore players looking for more to do will find comfort in Showtime however new or casual players will be disappointed in the package. With a full fledged $40 price tag I was expected a lot more content than I actually got.The whole expansion seems to cater to the Sim fanatics unlike Pets or Adventures that added more for casual players. If you love the Sims pick it up, for everyone else you won’t be missing much.