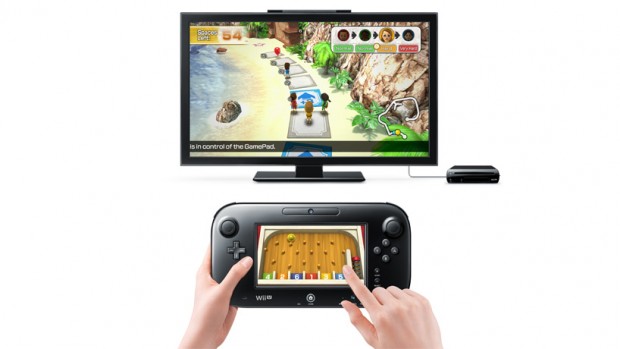 There’s an episode of The Office where everyone forgets Kelly’s birthday, and it’s up to Jim and Dwight to throw together a celebration at a moment’s notice. Dwight’s straightforward approach to party planning consists of hanging up a bunch of half-inflated gray balloons and a sign reading “It Is Your Birthday” in the most plain, boring font imaginable.

Wii Party U feels very similar. On the surface, everything appears to be all about frantic fun and frivolity, but if you peel back the plastic veneer, you’ll discover that you’re attending one of the most boring parties ever thrown.

It’s like we can’t go a few months without a new minigame menagerie hitting the market, and Wii Party U is Nintendo’s latest attempt to throw as many reasons to use a GamePad as possible into one game. Wii Party U tries to offer family-friendly fun through several different modes of play: TV Party, House Party, and GamePad Party.

TV Party features some of the longest games in Wii Party U, and play out similar to Mario Party’s board games – you’ll roll dice with up to four friends, move around several different boards, and play over 80 different minigames. House Party has you partaking in more open-ended party games – guessing sketches or playing games of remote control Twister are the norm here, and outside of a handful of games, these are largely pointless and forgettable. GamePad Party has you competing with another player in various GamePad-only minigames. Each player takes a side of the GamePad and uses their analog stick to interact with the game on the screen; move your pegs in a foosball match, or play a virtual game of tabletop baseball.

Save for the aforementioned House Party mode, most of the games offered here are at least decent the first time through, though most of the minigames rely more on luck than anything else – you’ll find that there is a disturbingly large amount of games that simply require you to pick one option and hope for the best. The board games throw some interesting ideas into the mix – GamePad Island especially, with its weird die-rolling minigames and special, game-changing spaces – and the GamePad games are a unique diversion.

But they’re just that: a diversion. Out of all of the minigames, modes, and options, only a small handful are actually interesting enough to play more than once or twice. There’s no depth, and no reason to return once you’ve played through all of the modes with a group of friends.

The game’s bland look and feel only serves to further highlight the abject shallowness of the entire experience. Featuring a similar design aesthetic to Wii Sports, Wii Party U boasts a clean, sterile exterior, ensuring that absolutely nothing offends, from the graphics, to the light jazz Muzak – somehow, Wii Sports seemed to have more personality. The proceedings are hosted by Party Phil, a jibbering bobblehead who looks like a Muppet without any of the charm, and blithers nonsense as you read the reams of instructions you’ll see any time you start up a new game. For a game all about partying with friends, Wii Party U tries very hard to make sure everyone’s asleep by the second round of minigames. If this game didn’t come with a Wii MotionPlus Remote, I’d feel very ripped off.

As a $10 pack-in with a Wii Remote, Wii Party U isn’t necessarily a bad deal. The games are worth playing through once with some friends, but it seems like the developers’ only real success is boring you to tears with its uninspired presentation. Once you’ve seen everything this party has to offer, you’ll quickly start making excuses as you reach for your keys and try to get the hell out of there.