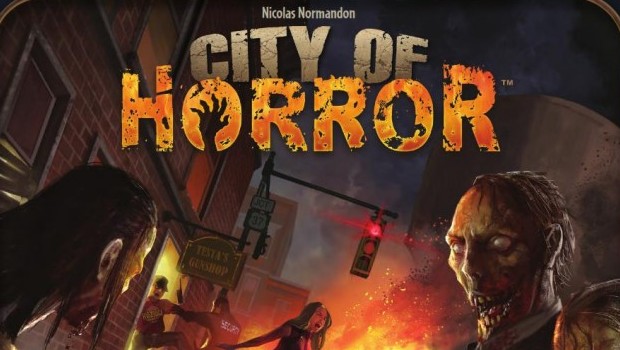 Zombies are everywhere! Seriously… everywhere. On TV, in movies, books, comics… I am sure there is a song about zombies. They have taken over our pop culture. Boardgames have not escaped the scourge. Basically a meme itself, zombies are playing a bigger and bigger role in tabletop gaming. There have been some hits, there have been some misses. Where does City of Horror fall?

City of Horror is a survival negotiation game. Each player controls a handful of characters in a doomed town. These characters are going to be fighting to stay alive by doing whatever it takes. After being assigned to a specific player, the characters are put into color coded stands to remind players who controls who. Each character card includes their worth at the end of the game, the character’s specific power, and shows if they are “rested” or “exhausted” depending on which side is face up. Most characters can use an ability for a one time perk, like killing a zombie, or stopping an equipment card from being played, at the expense of flipping the card to ‘exhausted. Each side has different point values, so keeping your characters rested will yield more points.

At the end of four rounds, a helicopter will arrive and rescue all of the vaccinated citizens of the town. This means that players will need to find vaccines and keep their people alive.

Most of the action takes place on the modular board. Every space can be flipped over to an ‘advanced’ side, making the game difficulty slightly adjustable. In each of the corners are buildings the characters will take shelter in and activate special location abilities. In addition, there is a small spot for the water tower, and the middle of the board contains the crossroads. Each location has a certain number of character spaces, which limits the number of characters that can ever be in one location. The exception is the crossroads, which has unlimited space. Each area also offers a location bonus, for example: players who have characters in the clinic can discard an item to pick up a vaccine.

Players also have a hand of equipment cards. These cards can be used as activators for location specific powers, as in discard to perform the action. Equipment cards also have various one time use abilities. Some allow players to move a character outside of the movement phase, or kill some zombies. Little ways to temporarily break the rules.

At the start of each round every player selects a movement card. This card will be used later. Then the top card of the zombie deck is resolved. This normally involves adding zombies to the various areas in the town. Supplies may also be dropped. Next, each player must move one of their characters according to the movement card they previously selected. For example, if red played a bank card, the red player would have to move one of their characters to the bank. If the bank is full, then the player must place one character at the crossroads.

After all character movements the zombies start attacking. This is where the heart of the game is. Each location has a condition for a zombie attack. If the condition is met, the zombies will attack the characters at the location. The survivors must sacrifice one of the characters at the location to quell the horde. The person who gets to decide this is elected. Each character at the location gets one vote. Thus if a player controls two characters, they get two votes. Simultaneously, the players involved all cast their votes (we used finger pointing). The player with the most votes gets to pick one character present to die. Before the vote, players may wheel and deal to try and increase their odds of staying alive. Players may trade equipment, vaccines, canned food and favors. Players may also use items and character abilities to stop the horde from attacking. After the zombie attack, a similar vote is held to determine who gets to divvy up the supplies that may be there.

After all spaces’ zombie attacks have been resolved, the next round starts. At the end of the last round, each player totals the points on their vaccinated survivors, their extra vaccines, their canned food, and any other effects. Whoever has the most points is declared the winner.

City of Horror, as you can imagine for a game about Zombies, has a rather dark art style. This is thematically great. The game feels dark and dirty, the art is evocative of B horror films, hitting just about all of the zombie tropes. The character art is subtle and effective. In general the game is well put together. The watertower space is 3-dimensional, all of the characters (and zombies) are on stands, helping to give depth. The components are all high quality.

The rules are long. I am going to get into this later, but there is a special rule for just about every card and every character. This means that the game takes forever to teach to new people, because you have to explain what each person’s character does. For the most part the base rules are easy to follow, just the characters and the equipment convolute play.

City of Horror seems best with 6 players. This facilitates the negotiation, as you rarely get one player with multiple characters in the same space (which is common with four players). It is necessary that all of the players understand this is not a cooperative game, and that it requires negotiation (this was harder to drill in than you might expect). Games take varying amounts depending on the level of arguing and yelling. Generally minimum is 90 minutes, with two hours being the norm.

City of Horror looks great. Setting it up on the table, it instantly gives off the ‘Play me’ vibe. The dark colors, the 3D board and Zombies! Even after hearing the rules, you are going to think that the game you are about to play is going to be great. Then you start playing and it all breaks down. 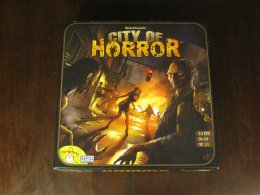 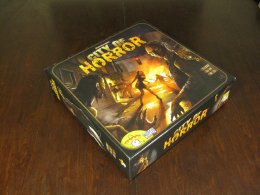 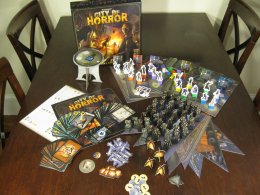 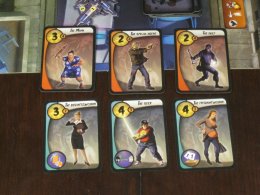 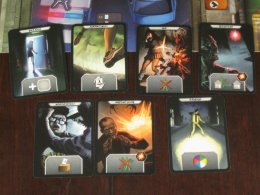 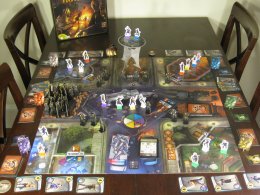 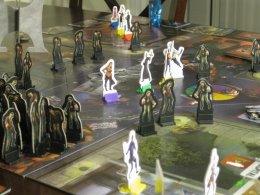 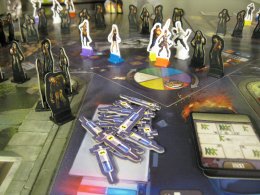 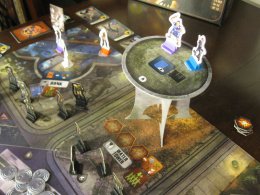 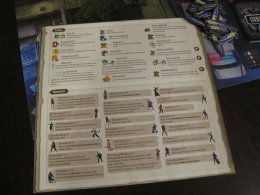 My biggest complaint is the convolution. I understand what City of Horror is trying to do, but stuff gets in the way. You can see under the layer of characters and equipment cards, that City of Horror is trying to meld the zombie theme with ‘Survivor’ style voting. This idea sounds good, it sounds fun. The issue comes from the need to have ‘things’ to negotiate with. Negotiation games don’t work unless there is some sort of currency to be traded with for favors. City of Horror introduces equipment into the game as this currency. Equipment is the thing you end up trading along with activated powers. The issue is that both of these things add so much to the rules that the game becomes more of a random ‘take that’ game, leaving behind all negotiation.

There are 21 characters in the game and ~20 different types of equipment. Each character and equipment card has an icon that is supposed to remind players what they can do. The icons are adequate for someone who has played the game a number of time, but for just about everyone else, there is a reference sheet. This single reference sheet has 40 different things on it. It turns out that this sheet is the most important piece of paper in the game because it is passed back and forth between players the whole time. Just about every time a player used an ability to directly hurt another player, the targeted player said: “What?! I didn’t even know they could do that! I thought it worked this way…”

Don’t get me wrong, these rules that I am complaining about do make the game more thematic. If I played this game with people with perfect memory and complete rules knowledge I am sure that City of Horror would feel very appropriate to the theme. Everything is fitting, and just about everything fits the theme. The special abilities are logically linked to characters/equipment. When the zombie card is flipped, there is a palpable sense of tension as people are hoping the picked the right movement card. And the negotiation (when you don’t have to reference the rules) is lively. In addition to being thematic, the high variety leads to significant replayability. That is, if you can get people to play.

City of Horror says that it supports 3-6 players. The problem is that it really needs 6 players. Getting 6 players to sit down to play a 2 hour game is not the easiest thing to do. The players who would be receptive to the game are going to be few and far between. Add to this that the learning curve is extremely high. The end result is simply not accessible, but only to a few hardcore negotiation gamers.

I really wanted to like City of Horror. On paper it sounds great. Sadly, in execution it falls flat. You can tell that the designers were on the right track for a solid negotiation game; however, there is something to be desired. The use of complex rules for characters and equipment bogs down the negotiation, which is the heart of the game. If your gaming group is really in to negotiation, you should at least try City of Horror. The rest of us should treat it like a zombie and run away.

From Trading in the Mediterranean to FPS, I love games. While I grew up in a house without consoles, PC gaming and board gaming were a large part of my formative years, and continue to influence my life. In this golden age of board gaming, I have jumped in headfirst in to anything table top. As a ludilogical student, I love thinking about how games work, their mechanics, their elegance and most importantly, enjoying how fun they are. Favorite Board Game (at the moment): Twilight Struggle Favorite PC Game (base solely on play time): Tie between WoW and DII Fell free to email me: comments, concerns, questions, feedback, rants, and/or suggestions.
Related Articles: City of Horror, Tabletop
Share
Tweet
Share
Submit